With construction of the border wall set to begin next month, a San Antonio-based artist has brought one of her artworks to the National Butterfly Center.

“Checkpoint Carlos,” a colorful art installation by Doerte Weber that represents the border wall, is currently on display at the National Butterfly Center. 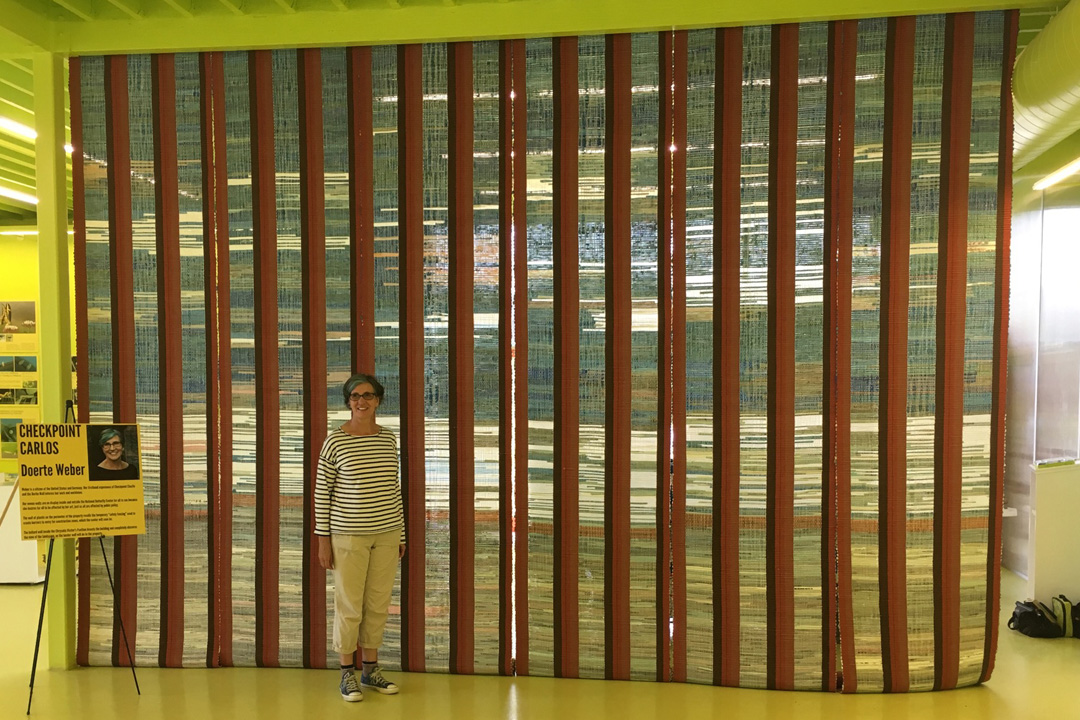 The Center is a local attraction that has been garnering national attention since July 2017 after government workers were caught trespassing on property owned by the Center to clear land where the border wall is planned.

As previously reported, surveying for land for the border wall began before Congress approved $1.6 billion for 100 miles of new and replacement fencing, with 33 of those miles in the Rio Grande Valley. The Senate approved another $1.6 billion for the next fiscal year, though the government is currently in a partial shutdown after President Donald J. Trump requested an additional $5 billion in funding for more border wall construction.

The wall could be up to three stories tall with 18-foot steel beams, called bollards, rising from a concrete base in several areas.

The wall is expected to go through several local attractions, including the 100-acre sanctuary that houses hundreds of butterflies and other types of wildlife. The Butterfly Center has 70 percent of its property located south of the levee, where the border wall is planned to be built.

To provide a taste of what life will be like with the border wall in the area, Weber has brought her installation “Checkpoint Carlos” to the area.

“It’s a sign of solidarity from the community of San Antonio for the people of Mission,” Weber said of Checkpoint Carlos.

Checkpoint Carlos is named after Checkpoint Charlie, the best-known crossing point in the Berlin Wall between East and West Berlin, Weber said.

As a dual citizen with Germany and the United states, Weber said she is all too familiar with the effect walls can have on a country.

“I grew up in a divided Germany, I know what a wall does to a community and how it divides people, cultures and families,” Weber explained. “Seeing these parallels between the Berlin Wall and the border wall made me want to do something about it.”

Checkpoint Carlos was then created. The installation, a colorful tapestry woven from recyclable material, has two components. One is a 15 by 16 foot-tall display that is housed inside the Center’s visitor’s center.

“It is meant to serve as a barrier while you’re in the Center to remind you of how the border wall will separate us,” Weber said. “You can’t go straight through the center to get to the other side of the checkpoint, it’s a real obstruction.”

The second component is a larger tapestry that stands 12 feet by 150 feet and is outside the Center. The purpose of the outdoor tapestry, Weber said, is that is it is made up of biodegradable materials, it will eventually disintegrate from wind erosion and other natural causes.

“It means that that every wall comes down no matter what,” Weber said. “If you see other countries like China and Germany which built walls, you see that they eventually came down. There’s nothing we can do about the upcoming wall as funding has been allocated and construction is set to begin in February, but all we can do is know that it will eventually come down. Maybe not in our generation, but nothing lasts forever.”

Checkpoint Carlos is currently on display at the National Butterfly Center. For more information, contact the center at 956-583-5400.