Girls Basketball has wrapped up round one of district play on the hardwood, and with another half to go, several Big 7 teams have proven to be playoff and district championship contenders.

District 31-5A
The Pioneer Lady Diamondbacks and Mission Veterans Lady Patriots have emerged as the teams to beat in District 31-5A as both programs have stormed out to 7-1 records in league play, tied for the top spot. 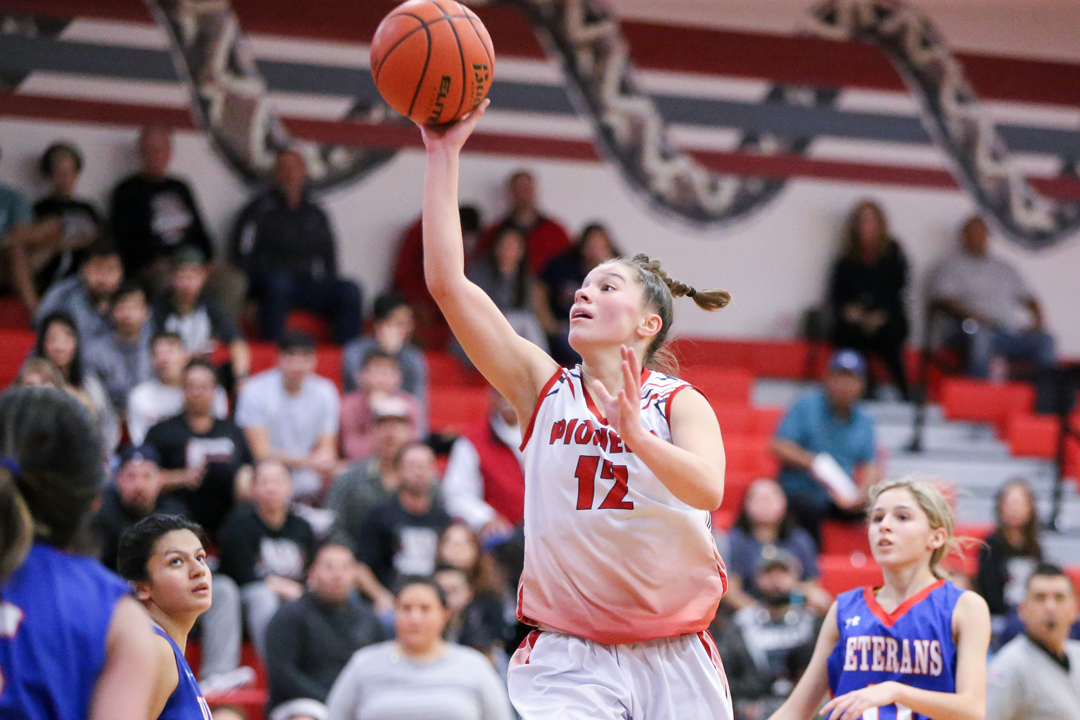 While evenly matched on the court, it was the Lady Diamondbacks who walked away with a 41-32 victory over Mission Veterans in the first meeting between the 31-5A powerhouses back on Jan. 1. Since that point, the two teams have been on a collision course for their second meeting, a game that holds serious district championship implications.

The Mission Veterans Lady Patriots experienced team responded to the loss to Pioneer by winning four straight, including a 37-28 road win over Rio Grande City on Tuesday. Seniors Jackie Howell and Selina Cortez led the way for the Lady Patriots with 11 points apiece, while junior Ronnie Cantu added eight points from the point guard position. In their prior outing, junior Kaylee Flores poured in a game-high 18 points against Roma High for a 59-35 win in favor of the Lady Patriots.

But before the Lady Diamondbacks and Lady Patriots clash on the court for the second time this season at 6 p.m. on Friday, Jan. 25 at Mission Veterans High School, both teams must get through playoff contenders like Palmview and Sharyland to remain atop 31-5A.

The Palmview Lady Lobos and Sharyland Lady Rattlers are fighting for their playoff hopes each night as they are currently in a three-way tie with Rio Grande City for the fourth spot in 31-5A with 4-4 district records.

The Lady Lobos are coming off their second win over the Lady Rattlers on Tuesday night where they pulled out a 29-26 victory at home in a low-scoring, defensive game. The win is the second straight for Palmview, but with the top three teams in 31-5A (Pioneer, Mission Veterans, PSJA Memorial) next on the schedule for the Lady Lobos, they’ll be upset-minded heading into the second half of district play.

The Sharyland Lady Rattlers have battled to a 4-4 district record with their most significant district win coming on the road over PSJA Memorial by a score of 37-32 on Jan. 11. Luckily for the Lady Rattlers, their path to the playoffs will be played out in front of their home crowd for the most part as Sharyland hosts four of their final six district games at SHS.

District 30-6A
The Juarez-Lincoln Lady Huskies have been the lone bright spot for the Big 7 in 30-6A. Since opening up district play with an 0-3 record, the calendar change has sparked life in the Lady Huskies as they are an impressive 4-1 in 2019.

After losing big to McHi 80-38 in week one of district action, Coach Irlanda Amador and her Lady Huskies had revenge on their mind to start round two of 30-6A play as they avenged the loss to the Lady Bulldogs with a 44-42 home win.

The Lady Huskies now sit tied with McHi for the fourth and final playoff spot, but if Juarez-Lincoln can keep up their hot play on the hardwood, they could find themselves in the playoffs for the second year in a row and just the second time in program history.

Juarez-Lincoln will host the PSJA Lady Bears on Friday, Jan. 18 at 6 p.m. at Juarez-Lincoln High School where they’ll have the chance to avenge another district loss.

As for the La Joya Lady Coyotes Mission High Lady Eagles, district play has been a struggle for the two programs.

La Joya is sitting at 2-6 with wins over Nikki Rowe and Mission High, teams with 1-7 district records. The Lady Coyotes were victorious 51-48 over the Lady Eagles one month ago in their first meeting, but have since dropped six straight games. The Lady Eagles started district 0-6 but were able to pick up their first league win over Rowe with a 32-30 win on Jan. 11.

The La Joya Lady Coyotes and Mission Lady Eagles are set for their second meeting as they will meet Friday, Jan. 18 at 6 p.m. at Mission High School.