For many, the final high school game of a football player’s career signals the end of their playing days. 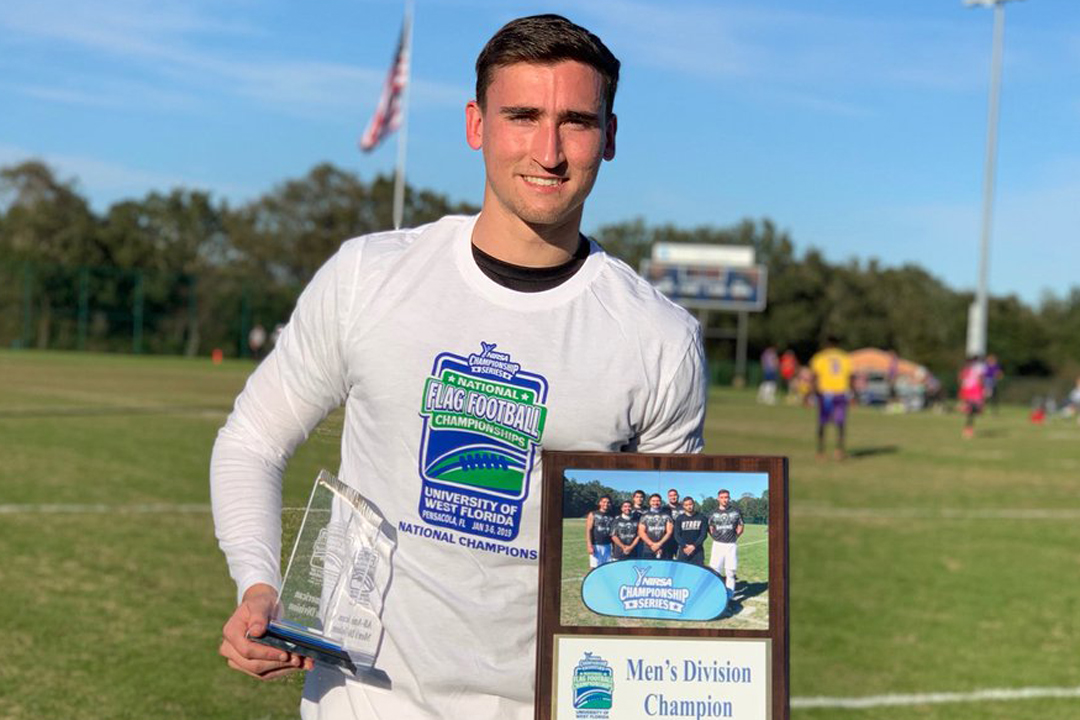 “We were the underdogs in high school, we were the underdogs in the national tournament, so we kind of stuck with that underdog mindset,” Chrysler said about his team’s national championship run. “People in the flag football community, NIRSA and everything, they know who UTRGV is and the next time they ask who won it last year, they’re going to say the University of Texas Rio Grande Valley, so that’s cool to represent.”

The Ravens, named after the popular HBO series “Game of Thrones”, are a team made up of former RGV high school football standouts ranging from Brownsville to Edinburg.

While they finished this season raising the national championship trophy, the process up to that point wasn’t easy.

One year ago, Chrysler and his team fell short at regionals, finishing in second place and one win away from an automatic registration bid in the national tournament. This year, they once again finished second at regionals, and while they could have hung up their cleats and gone home, they were determined to get the bad taste out of their mouths built up over two years and make a final run at a national championship.

“We said let’s go redeem ourselves and try to get the national championship, so that’s what made it more special,” said Chrysler, a senior exercise science major at UTRGV. “It took us two tries to get that national championship; it was a process and it was an awesome feeling. UTRGV is going to put up a banner in the Recreation Center, so that’s kind of cool that we left our mark at the university.

At the national tournament at the University of West Florida in Pensacola, the team from UTRGV managed to go unbeaten, including a dramatic, last-second 28-26 win over Georgia Southern in the semifinals to advance to the championship.

In the championship game, UTRGV clashed with the Georgia College Bobcats, a team who hadn’t lost a single game all year. The Ravens quickly changed that as their high-octane offense took over to score 40 points to Georgia College’s 26. With a 33-26 lead with four minutes left, Chrysler came up with a catch up the seam, made one defender miss and coasted into the end zone to put the game away with his second touchdown of the contest.

“They hadn’t stopped us the whole game and we had stopped them twice,” Chrysler said. “After they scored to make it a one score difference, there was about four minutes left and we just wanted to chew the clock out as much as we can, but we didn’t want to play too conservative because if we scored, we would’ve put the game away for sure. It was a seam ball, I kind of did a little dip, made a guy miss and he missed my flag. While I was running, I realized that was it, there was nobody around me and kind of just jogged in.”

Chrysler, Sal Martinez and AJ Garza all earned National All-Tournament Team Honors for their outstanding play during the NIRSA Championships. During his time at Sharyland High, Chrysler was a standout quarterback in his junior season and receiver in his senior year.

“We’ve been playing with each other for about two years, and we really had a lot of chemistry and a lot of athletes from the Valley who are college students joined to form a good squad,” he said.

“To represent the whole Valley and UTRGV and everything, it’s really cool,” Chrysler continued. “When they ask what school you’re from and you say from UT-Rio Grande Valley, and they’re all like ‘what?’ Everybody was just kind of looking at you like ‘we’re going to beat these guys.’ We look athletic, but we don’t really, really look the part, so in the back of our minds, we’re always the underdogs once we kind of go up north, and we were fine with that.”

And when it was all said and done, the underdog from UTRGV, finished on top.