A debate over the Meadow Creek golf course, which has been ongoing since 2016, was continued at this week’s Planning and Zoning Commission meeting in Mission.

Owner Olaguer Bauza and his wife, Laurice, have been trying to get part of their golf course rezoned to mostly residential lots and one commercial. They, along with some Winter Texan residents of Meadow Creek, were present this past Wednesday. 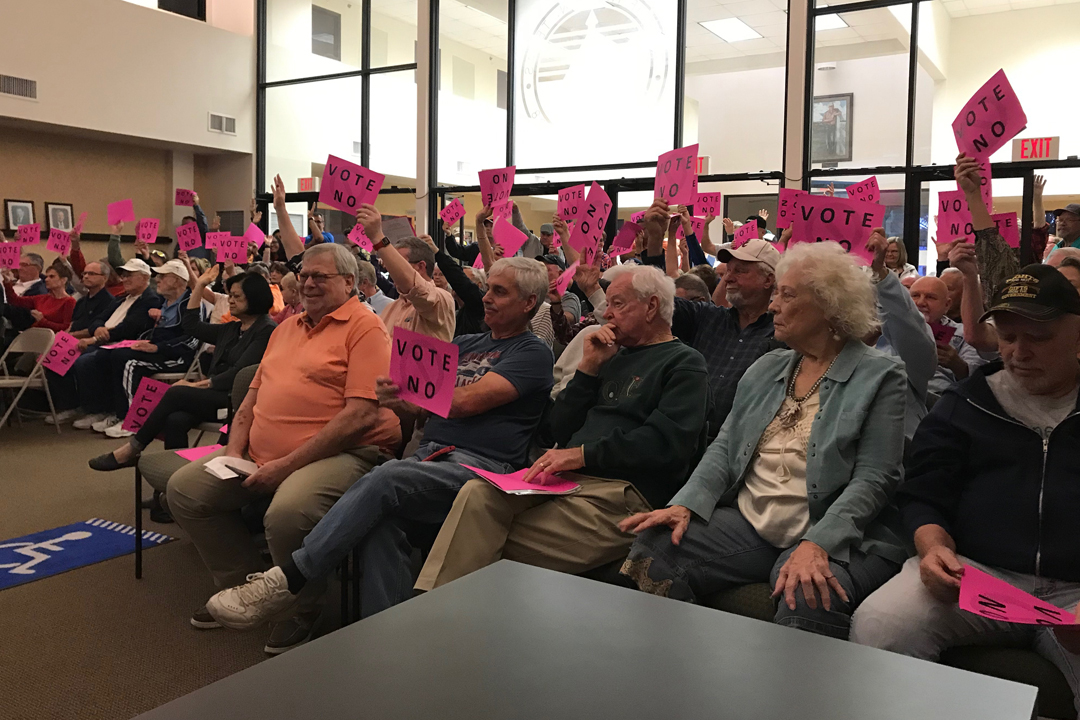 The four tracts of land that the Bauzas would like rezoned would go from PUD Agricultural to either Family Residential Districts or Neighborhood Commercial. The tracts were up for discussion in four separate items on the agenda.

Acevedo explained that the development of the rezoned property would allow for improvements of the drainage in Meadow Creek, as well as the roads surrounding it. He also said that while the original request was to rezone the entire golf course, they have since adjusted so it will still contain nine holes (half).

“We&rsquo;ve given it considerable thought, and the golf course is not what it used to be,&rdquo; Acevedo said. “Mr. Bauza purchased the golf course in not-so-decent conditions, it needed a lot of upkeep. He&rsquo;s proposing to develop half [of the land], and keep the other half as a golf course.&rdquo;

The Bauzas agreed with the committee&rsquo;s suggestions to give the residents an equal amount of backyard space throughout Meadow Creek when asked.

Residents of Meadow Creek, many of whom are Winter Texans, filled the council chambers in Mission City Hall, all with the intent to make their opinions on the potential rezoning known to the committee. Some came forward with pre-written statements detailing their time living in Meadow Creek, while others cited local charters and codes discussing the area from when the course was opened in 1987.

“After a long search for the perfect home, we found it at the seventh hole of the golf course,&rdquo; Sandra Wakefield, a resident at Meadow Creek, said. “Now we could enjoy our favorite pastimes: nature and golf. Never did we expect to be living 100 feet from commercial businesses, or losing these beautiful views, the plant life, the wild life, our property values and risking more flooding.&rdquo;

The arguments against the rezoning also included the Bauzas&rsquo; alleged lack of upkeep of the golf course and community center, which has led to less communication within the group.

“If I can quote the Texan Dr. Phillip McGraw, ‘The best predictor of future behavior is past behavior,&rsquo;&rdquo; Ron Ingram said. “Take a look at your last dealings with these people, and tell me things are going to get better. I urge you to deny the zoning request until an actual plan with credible players comes forward.&rdquo;

Residents also complained about how the lack of proper drainage in the golf course meant that their area was flooded during the severe rainfall that occurred in June 2018. Acevedo and City Engineer J.P. Terrazas said that because the standards for drainage have been increased from securing the area for a “five-year storm&rdquo; to securing the course for a “fifty-year storm,&rdquo; the development of the land near the course could actually improve drainage conditions.

“To me, it seems that [with development], drainage would be improved in the area,&rdquo; Javier Barrera, a committee member, said. “The way it is now, it doesn&rsquo;t seem like it&rsquo;s very good, and if there is development there it will have to be improved.&rdquo;

Diana Izaguirre and Debra Lee Alvarez, also part of the committee, said they had driven through Meadow Creek the day before the meeting, and noted that the state of cleanliness in Mission in general needed to be addressed, but it was not entirely on the Bauzas&rsquo; shoulders.

“It does look like it has not been taken care of,&rdquo; Izaguirre said. “Not just Meadow Creek, I drove down every single street there, and there are some streets where there&rsquo;s tires, couches, mattresses. Us, as the city, we need to take more of an approach of trying to help our citizens maintain the community.&rdquo;

When the committee voted to approve the rezoning requests, the Winter Texans were visibly dissatisfied.

While some called out for the committee to change their minds, there were a few Winter Texans living in Meadow Creek who attended the meeting in support of the Bauzas, who could not be reached for comment by press time.

Two women in support of the Bauzas mentioned that some Winter Texans have been “talking ugly&rdquo; and saying “racist&rdquo; and “mean things&rdquo; about the Bauzas, who are subsequently scared to see the residents. They also stated that about 600 people live in Meadow Creek, but less than 100 were present at the committee meeting.

Julie Reedy spoke in favor of the Bauzas after the meeting, saying she considers them good people who don&rsquo;t deserve the issues the couple has had to undergo in the last three years.

“It&rsquo;s so positive for the community,&rdquo; Reedy said, stating that development would keep the area prosperous. “The people that are buying homes here [now] are younger, they&rsquo;re working people, not retired people, with children. The population is turning drastically.&rdquo;

She said the course was built in 1986, and was not even part of the city of Mission, so the charters of the time are outdated and the environment has changed.

“When it was owned by the county, it was only a five-year plan that&rsquo;s never been upgraded,&rdquo; Reedy said, referring to drainage. “Now it has to go to a fifty-year plan. To do that, they needed a permit to rezone. The developers and the city will be responsible for getting that done, that&rsquo;s not on the Bauzas.&rdquo;

The committee recommended approval of the rezoning, and the final decision will be made by the city council at the next regularly called meeting on Monday, Jan. 28.