Mission Veterans Memorial hoops moved one step closer to the playoffs Tuesday night as the Patriots and Lady Patriots picked up big wins on the road over the rival Sharyland Rattlers.

With just a few district games remaining for boys and girls high school basketball across the Valley, both teams are in position to play into the postseason with the Lady Patriots extending an impressive streak, while the Patriots attempt to start one of their own. 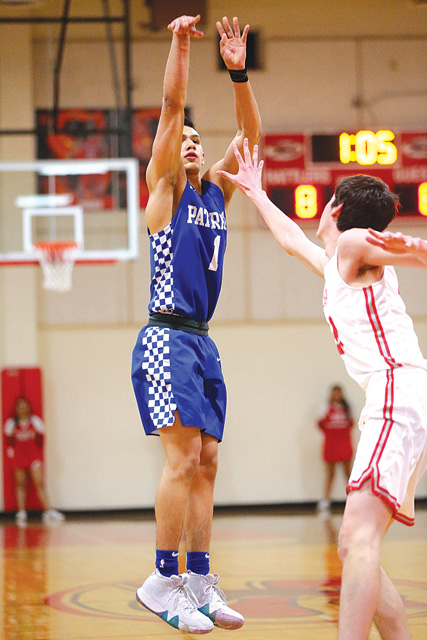 After falling to Pioneer on Friday night in a battle for the district championship, the Mission Veterans Lady Patriots bounced back in a big way as they beat the Sharyland Rattlers on the road 40-19 to improve to 10-2 in district play.

“Coming off Pioneer, we didn’t get the outcome we wanted, but we all played tough and we all played hard,” said senior post Jackie Howell. “We still have a goal for ourselves as a team, so we just wanted to come into this game and use the same enthusiasm we had against Pioneer, and we came out strong in the second half and it worked out.”

Last season, the Lady Patriots walked into the Sharyland High School gym for their second meeting with the Lady Rattlers, and as junior point guard Ronnie Cantu described, the loss was a disaster. This time, Mission Veterans wasn’t walking away without a win.

“It was a matter of just coming out strong, coming out with the mentality that we’re going to take this game and every game from here on out,” Cantu said after the win. “We knew Sharyland was a good team, we lost a game to them last year here in the second round in their house and it was a disaster. We knew we just had to come out strong and win this game.”

The Lady Patriots got off to a bit of a slow start offensively, but the energy on defense was there from the opening tip. Mission Veterans held Sharyland to zero first quarter points and just two in the third, disrupting the Lady Rattler offense with tipped passes and smart defense.

“Despite the first half, which we wasted a lot of opportunity, the girls did it the second half and it showed,” said Head Coach Rafael Cantu. “They got a little tougher mentally and carried out the game plan. I told them we have to focus on ourselves and do it together, because when we play connected like we were today, we’re a good team.”

It was a balanced offensive effort from the Lady Patriots as Kaylee Flores (11), Howell (8), Cantu (7) and Selinda Cortez (6) all hit big shots to build a second half lead.

The victory over Sharyland also clinched the Lady Patriots’ 14th playoff berth in 15 years, an impressive streak for Mission Veterans girls hoops program. With just two district games remaining, the Lady Patriots have their eyes on the postseason.

“We’re pushing to see how far we can go in the playoffs and just improve each game and each practice,” Howell said. “Coach has been emphasizing the playoffs so we need to get ready for what we’re going to see.”

Patriots
If you’re in need of a heater this winter, maybe Mission Veterans’ Noe Cantu can help you out.

The senior guard was scorching hot against the Sharyland Rattlers on Tuesday night as he dropped a game-high 37 points to lead the playoff hungry Patriots to a 65-62 win, and one step closer to a playoff berth.

“We just came with a lot of energy; we knew how important it was,” Cantu said. “I felt really good, I knew I had to come in and step up. I had to do it for the team.”

The Rattlers came out swinging themselves as a loss would eliminate Sharyland from playoff contention. Andres Abrego and Nazier Moore combined to score 36 points for the Rattlers, but Cantu wasn’t about to be outdone.

After Sharyland took a 62-61 lead late in the game, the Patriots proceeded to knock down four foul shots to take the lead back at 65-62. That’s when the Patriot defense stepped up and shut down the Rattlers. Sophomore post AJ Gonzaque grabbed rebound after rebound on the defensive glass, denying Sharyland the chance of victory. He finished with 16 rebounds, four points and four steals, while Josue Muniz scored 11 points of his own.

Since entering the starting lineup the last three games, Gonzaque has added athleticism, energy, and a winning mentality to the floor for the Patriots.

“It’s a winning mentality, I come out here every day and I try to win,” he said. “We don’t want to be ok with mediocre performances. We want to go out there and be the best at whatever we do, whether it’s points, rebounds, assists, steals, we all just need to be the best we can.”

Ramos, in his first year leading the Patriots, has his team at 6-4 in District 31-5A play with just four games remaining. Currently the third seed, a playoff berth would be the Patriots’ first since the 2014-2015 season.

“I think we’re at a good place right now,” said Ramos. “We’re in a good spot, we just got to keep getting better, make a push and God-willing, make the playoffs.

These guys have bought in to what I wanted to do and bought into the culture I wanted to bring. We preach energy, effort and excitement and these guys play hard every game.