When city employees accused a manager of sexual harassment, Pharr transferred him from the Events Center to City Hall. 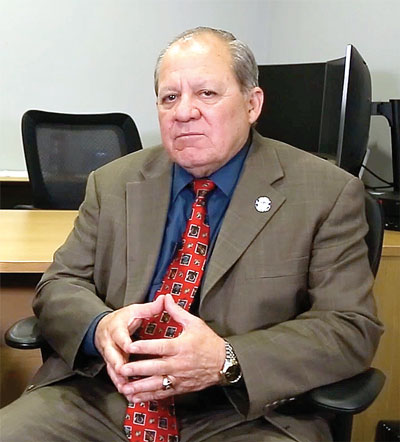 That decision backfired in March 2018, when all six members of the Media Department wrote letters to Human Resources, accusing Rodriguez of making inappropriate comments.

Employees said Rodriguez referred to contract workers as “beaners,” called the custodian “Mexican lady,” and made other offensive comments through a hand puppet he called “Rocky.”

“At this time there are still unresolved matters in the cases surrounding Gary,” City Attorney Patricia Rigney said in a statement provided by City Manager Alex Meade. “It is my opinion that the city should not comment on these matters. Doing so could subject us to continued or new litigation.”

The Progress Times requested the Media Department complaints and resulting investigation in October 2018. Pharr refused to release the records and requested a decision from the Attorney General’s Office, which directed Pharr to release the documents last month.

Rodriguez served as the city spokesman and also assumed responsibility for the Pharr Events Center.

Serious questions about Rodriguez surfaced in 2016, when four Events Center employees filed lawsuits against the city.

They accused Rodriguez of making inappropriate comments and touching them in ways that made the employees feel uncomfortable.

The most serious allegation involved Dahlia Ybarra, who accused Rodriguez of squeezing her thigh during a team-building event at City Hall.

Pharr spent about $128,000 on the lawsuits from October 2016 to May 2018, according to a memo prepared by the Human Resources department. Pharr also approved a $70,000 settlement with Ybarra last month.

Concerned about the complaints, Pharr moved Rodriguez from the Events Center to City Hall, where he started supervising the Media Department.

Employees at the Media Department also had problems with Rodriguez.

In March 2018, all six employees wrote letters to Human Resources, complaining that Rodriguez made racist, sexist and homophobic comments.

“Mr. Rodriguez would always talk about ‘Rocky’ his imaginary character which is his hand,” a Media Department employee wrote to Human Resources. “He uses ‘Rocky’ to say whatever he wants and gets away with it because to him it’s just his imaginary character. For instance ‘Rocky’ would try to invite Jennifer out to a date making her really uncomfortable and then Mr. Rodriguez would jokingly get mad at ‘Rocky.’”

Employees said Rodriguez constantly made comments that made them feel uncomfortable.

“Most recently he touched on the ‘Times up’ movement indicating that those women are all liars and how he admires Harvey Weinstein and asked me if he ever tried to do anything to me since I lived in California,” another employee wrote to Human Resources. “I ignored the comment and Mr. Rodriguez laughed it off saying it was ‘Rocky’ (his hand) asking.”

“Regarding the use of insensitive remarks that staff has construed as racial, as an Hispanic American myself, I have used terms that some may consider racial but only in terms of trying to be funny,” Rodriguez wrote in a memo. “I now know these employees are sensitive to this and I will cease making these comments.”

“Regarding the hand puppet Rocky. Yes, I have used my hand as a talking puppet named Rocky,” Rodriguez wrote in a memo. “He is not an alter-ego as much as just a make believe character that says funny stuff.”

Rodriguez said Media Department employees misconstrued a comment he made about asking a female employee for a date.

“I firmly deny this happened in that context but rather as a part of a larger conversation that was going on at the time,” Rodriguez wrote. “I now know this is wrong and it will cease.”

“After being the subject matter of four lawsuits, Mr. Rodriguez should be at his best behavior; however, he continues to carry himself in an unprofessional and offensive manner,” according to a memo dated May 31 that Alanis addressed to City Manager Juan Guerra. “It is clear that regardless of his previous disciplinary action and three day suspension, he continues to demonstrate that his social skills, manners, and ability to fit into a public sector work environment and to get along with other employees continues to be a challenge for him.”