With border wall construction set to begin later this month, a group of protestors showed up to the National Butterfly Center Monday morning to defend the center.

Following a news release sent out Friday, Feb. 1 by the U.S. Customs and Border Protection that announced the arrival of heavy machinery to be used “for construction on federally owned land,” members of the local Carrizo/Comecrudo Tribe-along with other opponents of wall construction, met at the Center. 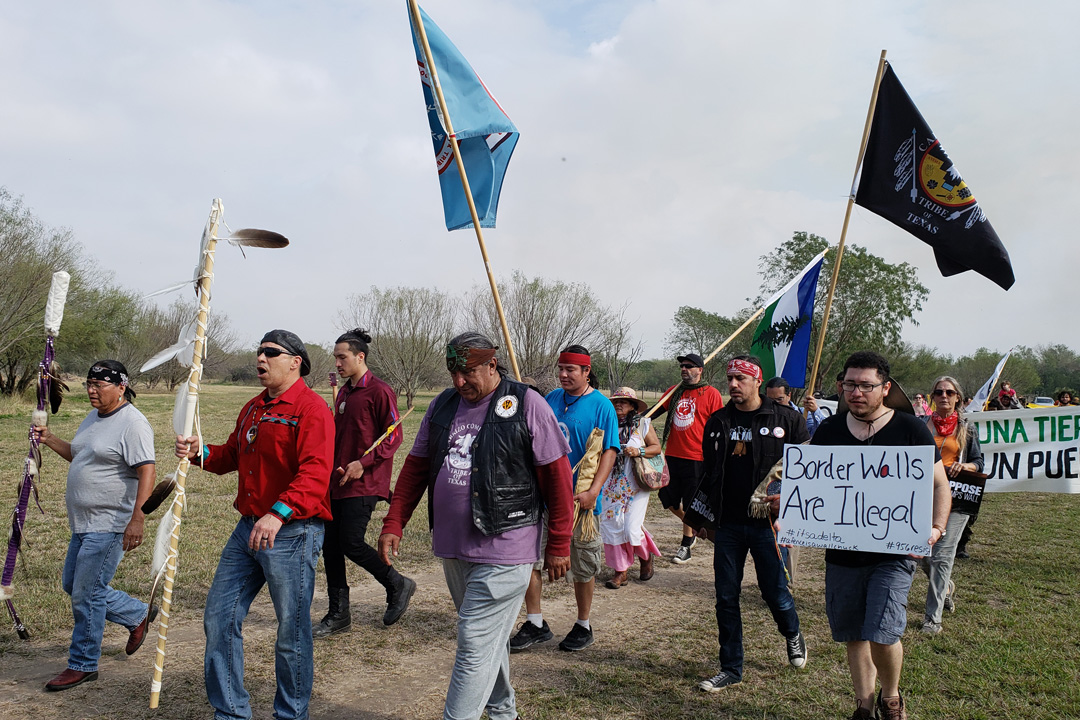 “We just want to educate the public as to what is going on here because I don’t think they’re understanding that U.S. territory is being surrendered to build this wall,” Juan Mancias, chairman of the Carrizo/Comecrudo Tribe said. “People need to start registering to vote and educating themselves about the original people of this land. We have heritage here that is being taken away.”

The protestors marched from the Grace Baptist Church in Mission, more than two miles east of the Center, and ended in a prayer circle on the levee wall behind the center where the border wall is being planned to be built.

Funding for construction of a total of 33 miles of border wall in Hidalgo and Starr counties was approved last March as part of a $1.3 trillion omnibus bill, which included 25 miles of levee wall fencing in Hidalgo County and eight miles in Starr County.

The Center has been in the national spotlight since July 2017 when it’s Executive Director, Marianna Treviño-Wright, discovered government contractors trespassing on the Center to assess the area for border wall construction. The Center, as well as the La Lomita Chapel and Bentsen-Rio Grande Valley State Park, are other local attractions that are at risk of losing property to the border wall.

Treviño-Wright thanked the supporters who showed up, calling them incredibly courageous. In the past, the executive director has spoken out about the impact the border wall would have on the local environment.

“It would be an environmental disaster,” she’s previously said. “Less than five percent of our native habitat remains in Texas for our native wildlife,” she previously explained. “Birds, butterflies and other animals are looking for natural landmarks as guides when they travel, not unnatural ones that obstruct their movement. Construction will desiccate them.”

She added that the Center, which houses hundreds of different types of wildlife, would lose 70 of its 100 acres that reside south of the levee to the border wall.

Jeffrey Glassberg, President of the North American Butterfly Association, was in attendance of the protest.

Glassberg said heavy machinery was spotted near the Center the day before but was gone by Monday morning. Though he praised the protestors in attendance he wondered what effect they’d have on the border wall construction.

“I don’t know if it’ll change the trajectory of this whole thing but knowing there are people out there who believe in us and support what we’re doing is very heartening,” Glassberg said of the crowd.

Glassberg, also said NABA was planning to file an emergency temporary restraining order against the federal government to delay border wall construction. However, appraisers contacted by the government were set to meet with Glassberg and Treviño-Wright to assess the property, they said.

“It’s a standard practice the government makes if they want to take your land through eminent domain so they can make you a monetary offer,” Glassberg said. “We’re not selling it though, I strongly doubt they will offer us a price that would be reasonable for us even if we wanted to sell.”

After the protest, Mancias said he wondered how more people would try to prevent more protests like Monday’s.

He recalled how, just the day before, he and a group arrived to Mission’s 900-year-old Montezuma Bald Cyprus Tree, a historical landmark on Los Ebanos just a few feet away south from the levee wall.

“And then, a bunch of local, state and federal law enforcement agencies showed up,” Mancias said. “They accused us of trespassing on federal land, land that until recently was for the public. They held us there for almost an hour trying to intimidate us.”

U.S. Rep. Henry Cuellar, D-Laredo, introduced an amendment last week to the Democratic proposal to prevent wall funding in “protected areas” along the border by adding language meant to protect environmental areas, such as the butterfly center.

“I know we can secure the border in a much more effective way, and at a fraction of the cost, by utilizing advanced technology and increasing the agents and properly equipping them on the border,” Cuellar said in a statement. “I have been outspoken against President Trump’s wall because as someone who lives on the border, I understand firsthand that a massively expensive wall is nothing more than a 14th century solution to a 21st century challenge. I speak with constituents, landowners, and law enforcement professionals regularly and we all know that this is an ineffective use of taxpayer dollars.”