The Pioneer Girls Basketball program just added a shiny, new piece of hardware to their trophy case as the 2018-2019 Lady Diamondbacks captured their first district championship and playoff berth since the school opened five years ago.

“They put in so much work, not just this year, but the years before,” said Pioneer Head Coach Nicole Villarreal.
“From last year being one game out of the playoffs to now being a district championship team, it’s a tribute to their hard work and their dedication to the program. We all had the same goal and they embraced it and they executed.” 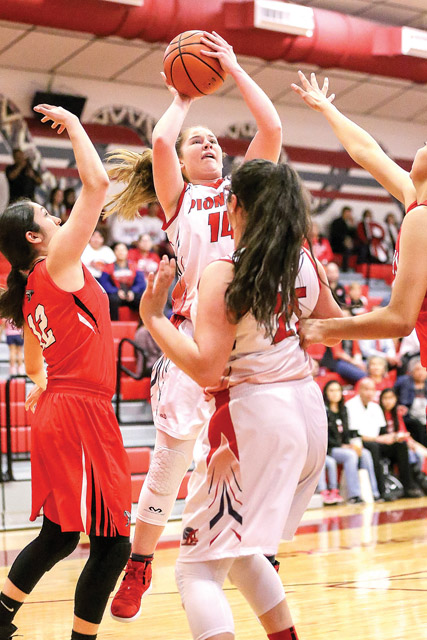 The Lady Diamondbacks finished the year at 13-1 in district and cemented their sole possession of the 31-5A crown with a 43-35 win over Rio Grande City on Tuesday night in the regular season finale.

“We worked so hard as a team and our coaches pushed us to be the best we can, and that was to win district,” said sophomore point guard Audry Hornaday, a leading candidate to be the 31-5A Most Valuable Player. “It’s a great feeling, it’s a great accomplishment to move on to playoffs for the first time in school history, I cannot wait.”

Despite a slow start in front of their home crowd against Rio, the Lady Diamondbacks began rolling in the second half thanks to an increase of activity on the defensive end.

Alexia Hernandez, Jordan Bravo and Hornaday began poking balls loose and forcing RGC into committing multiple turnovers, which quickly turned into Pioneer points.
“My shots weren’t going in, so I knew that if my offense wasn’t going anywhere, my defense would,” Hornaday said after the win over Rio. “I really picked it up on defense, I was trying to facilitate as well as I could, and we created turnovers, got some steals and convert on the other side.”

Bravo, a freshman, has stepped into a major role for the Lady Diamondbacks as a threat from deep that can take defenders off the ball. While she may be younger than most opponents, she doesn’t play like it.

“I don’t really focus on my grade, I focus on how I need to play versus older people,” Bravo said. “I definitely play at a higher level and have to stay focused.”

Now, Pioneer is preparing to make their playoff debut and up their game to another level.

“We’ve been talking about that for the last two weeks, about being mentally tough,” said Coach Villarreal. “The atmosphere is going to be much like what we saw at Mission Veterans. We talk about how we’re going to respond, and I think our practices are intense enough and requires them to focus, so it’s going to be an exciting venture.”

Pioneer hosts Brownsville Pace at 7 p.m. on Monday, Feb. 11 at Pioneer High School in the Bi-district round of the playoffs.

Head Coach Rafael Cantu and the Lady Patriots posted a 12-2 record in District 31-5A, good enough for second place after only falling twice to district champion Pioneer.

Mission Veterans brings one of the most balanced attacks in Valley ball to the court with an inside presence provided by senior post Jackie Howell and the outside shooting and playmaking ability of guards Ronnie Cantu and Kaylee Flores.

The Lady Patriots picked up a Bi-district Championship a season ago with a first round playoff win over Donna before being eliminated by Flour Bluff in the second round. With Howell back for her final shot at the postseason, Mission Veterans and their scrappy defense is determined to send the senior out with a successful playoff run.

Mission Veterans will face Donna High on Monday, Feb. 11 at McAllen High School in the Bi-district round of the 5A Girls State Basketball Championships.