This article was originally published in the Progress Times issue dated Friday, Feb. 8, 2019.

Youth and adult volunteers from across Texas were gathered this week to learn more about how they can keep their fellow students and communities safe.

The Texas Crime Stoppers team asked La Joya Independent School District Police Chief Raul Gonzalez if the district would be willing to host their annual conference this year. Held at the Embassy Suites Hotel in McAllen, the event ran from Wednesday Feb. 6 through Friday, Feb. 8. 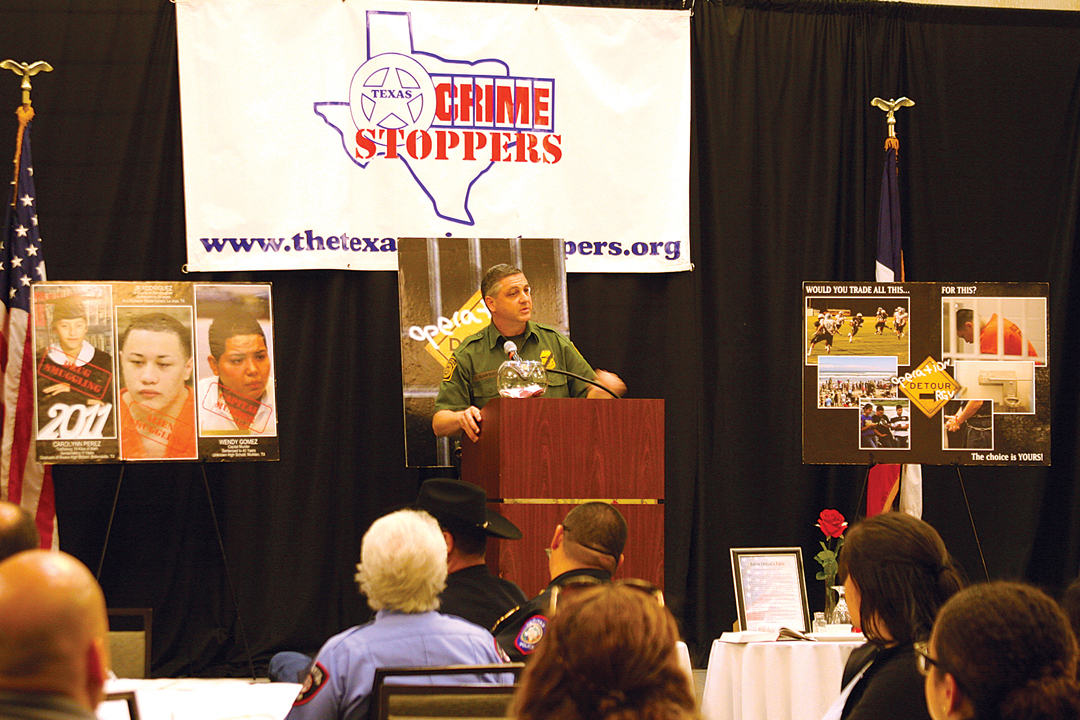 “We&rsquo;ve had our program since 2002, and since then it&rsquo;s been a very successful program,&rdquo; Gonzalez said. “When it comes to safety and making sure that we protect our kids, I strongly believe that it is our responsibility, and the only way we can keep our schools safe is if we have kids that are willing to report information to us.&rdquo;

Every February, the Texas Crime Stoppers student volunteers, administrators, program sponsors and School Resource Officers (SRO) meet for the conference. The event focuses on current trends and issues seen on campuses, such as cyberbullying, drugs and theft.

Throughout their stay in the Valley, visitors attending the conference engaged in interactive self-defense classes, demo forensic labs, police station tours, were taught operational guidelines for running an effective crime stoppers program on campuses and heard experienced speakers from all over the country.

According to a press release from the district, 16 hours of continuing certification and Texas Commission on Law Enforcement (TCOLE) credits are available upon successful completion of all requirements, attendance at all sessions and submission of all completed training documents. Attendance will satisfy training requirements for continued certification for all certified Crime Stoppers Organizations present.

Hidalgo County Sheriff J.E. “Eddie&rdquo; Guerra along with several local police chiefs were present at Wednesday&rsquo;s ceremony, and he spoke about the importance of student volunteers in the area, and thanked all the service members and officers that work together in the county to ensure safety among residents and visitors.

“It takes a lot of people to keep this community safe,&rdquo; Guerra said. “Our crime [rate] continues to go down.&rdquo;
“Our county is on the border, and right know you all know the border is getting a lot of attention from Washington, D.C.,&rdquo; Guerra added. “It&rsquo;s always portrayed as the wild wild West, so to speak, but I&rsquo;m here to tell you that that&rsquo;s not the case.&rdquo;

Local and out-of-state speakers were scheduled to talk to those in attendance and give them insight into their experiences, including Carly Posey, the mother of a student who was at Sandy Hook Elementary School the day of the shooting on Dec. 14, 2012, and Joseph Quarterone, with Operation Detour.

Quarterone, originally from Boston, now works for the Border Patrol and speaks at student events for Operation Detour RGV. He often highlights the dangers and consequences of smuggling, a crime that occurs often in the Valley due to our proximity to the border.

The first Texas Crime Stoppers Conference was held in Austin in 1989, and Texas Crime Stoppers Advisory Council proclaimed that each conference would be a celebration of the work volunteers and service members provide in ensuring the safety of communities. A candle was lit to honor the memory of victims of crime, and has been lit annually ever since.

Erika Salinas, a LJISD Campus Crime Stoppers board member, and her mother Juana Gonzalez lit this year&rsquo;s candle for the conference&rsquo;s opening ceremony on Wednesday afternoon. Erika&rsquo;s younger brother was murdered on April 22, 2018, and their family is still recovering.

“To lose a loved one to such an act of violence is beyond anything we have ever experienced,&rdquo; Salinas said. “Every day it&rsquo;s really hard for our mom to expect his call and know he will not be [calling], and it&rsquo;s difficult when night comes and his children are waiting for him to come home from work.&rdquo;

Salinas said they hope to convey to service members working on these cases that their loved ones did not choose to die.

“An individual, a coward, made that choice for them,&rdquo; Salinas said. “Our loved ones can no longer speak for themselves, but they do leave behind family and friends that will advocate for victims rights, and we will be their voice.&rdquo;