Last year the Juarez-Lincoln Huskies were the only Big 7 boys’ basketball team to qualify for the playoffs.

Perennial powerhouses such as the Mission Veterans Patriots and the Sharyland Rattlers failed to extend their seasons into post-season play. And with the Huskies bi-district round loss to the South San Antonio Bobcats, the Big 7 failed to have a representative in the second round of the UIL state playoffs for the second year in a row. 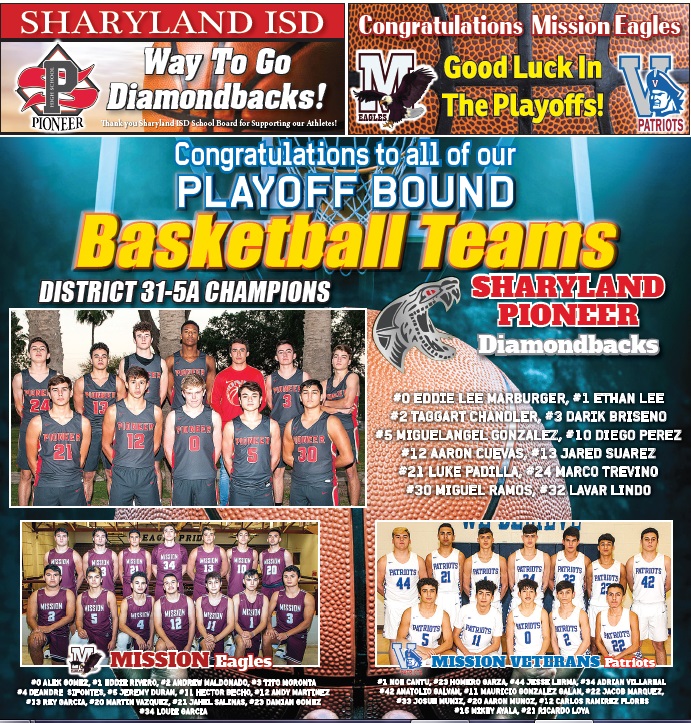 The last Big 7 team to advance into the second round of the playoffs was the 2016 Sharyland Pioneer Diamondbacks’ team. While it is too early to tell if history will repeat itself this year, there is that possibility since the Diamondbacks are back in the playoffs for the first time since that 2016 season. As a matter of fact, not only are they in the playoffs, but they just clinched their first district title in school history by posting a 13-1 record against their District 31-5A opponents this season, equaling the Lady Diamondbacks’ same feat which they accomplished last week.

While the Diamondbacks are sharing their title with the Rio Grande City Rattlers, they will be the district’s top seed in the playoffs thanks to a coin flip going their way. Next up for Coach Rene Gonzalez’s squad will be the Brownsville Pace Vikings who are entering the playoffs as District 32-5A’s fourth seed.

The two other Big 7 teams that have qualified for the playoffs this season are the Mission Veterans Patriots and the Mission Eagles. While this will be the Patriots’ first playoff appearance since the 2015 season, it’s 1-1 for Jose Ramos who is in his first year as the Patriots’ head coach.

As for the Mission Eagles, their 9-5 District 30-6A record not only earned them a third place tie with the McAllen High Bulldogs, but it also made it possible for the Eagles to bring an end to their 10 year playoff drought.

In his second year as the Eagles’ head coach, Rico Martinez has seen his team go from their 2-12 record last year to 9-5 this year. While he credits his team’s hard work for such a quick and dramatic turn-around, he also acknowledges that having so many players returning from last year has played a part as well.

“The kids have put in the work this year,” Martinez said. “Especially the seven guys that returned from last year’s team. They made up their minds since the end of last year that they had the talent to do something special this year. They put in the work during the offseason and kept it up all season long and here we are in the playoffs.”

“Coming out of last year, we had three players in particular who were not football players and that allowed them to focus on basketball year round,” Martinez added. “They are Martin Vazquez, Eddie Rivero and the one senior that has been on this team for three or four years is Andy Martinez. Louie Garcia decided to play football this year so that benefited him when it comes to his strength. These four guys really put in the work but they had help from Jahel Salinas and Deandre Sifontes who came into the program from the junior varsity last year.”

Depending on whether they end up as the third seed or the fourth seed, which will be determined after they play the McAllen Bulldogs in a tie-breaker game, the Eagles will either play Laredo Alexander, Laredo United or Laredo Nixon in the bi-district round of the playoffs next Monday or Tuesday.

When Eagles’ senior shooting guard Martin Vazquez was asked what made the difference this year compared to last year, he said, “We started playing as a team and we came together with great chemistry the whole season. But mostly we had fun and we did what we had to do.”

At 6-foot-5, senior power forward Louie Garcia is the tallest member of the Mission Eagles’ basketball team. He for one is quick to credit Coach Martinez for the team’s quick turn-around.

“He’s a defensive coach first and defense is how he rolls,” Garcia said. “I give him a lot of credit for turning our basketball program around. But mostly, the guys wanted to work and he really made us work. We have a lot of talent on this team and if we all play together and we play our style of ball, we could surprise a few people from here on out.”

The Eagles will be playing the McAllen High Bulldogs in a tie-breaking game tonight at 7:30 at Neuhaus Gym. The winner will enter the playoffs as the district’s third seed while the loser will enter as the fourth seed.