For Rita Perez, Pearson Elementary School has been a place where she has continued to grow for most of her career journey.

Perez was named as a finalist for the 2019 H-E-B Excellence in Education Award in the Lifetime Achievement category. The third grade math and science teacher was surprised with the announcement this week. 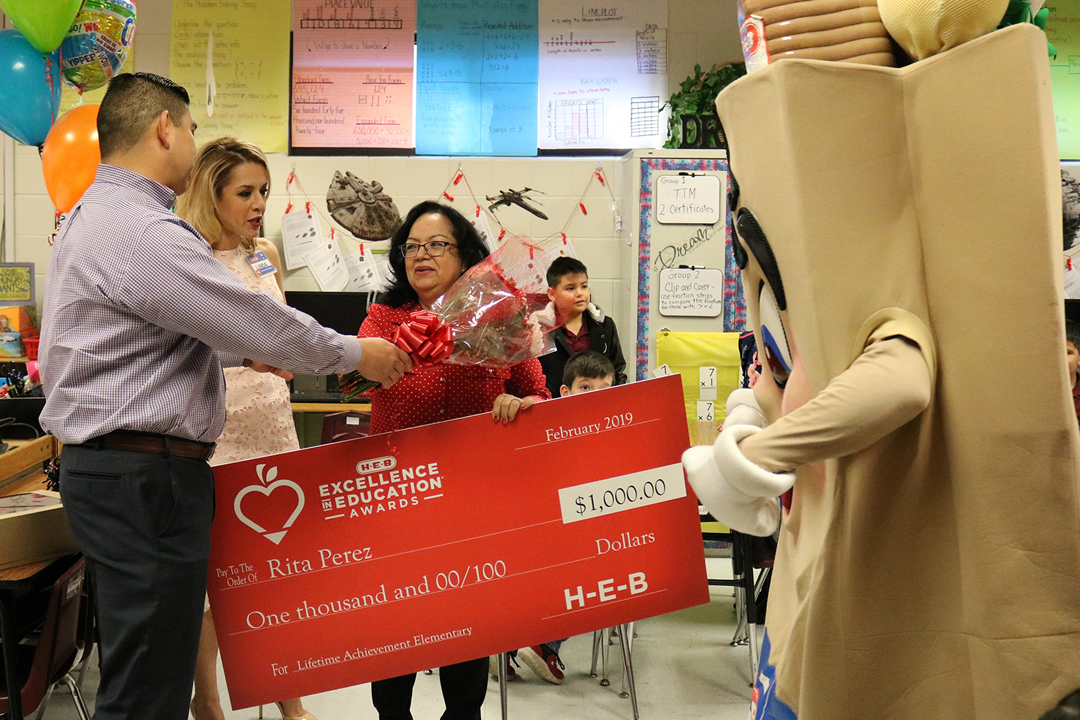 According to a press release from the Mission Consolidated Independent School District, the H-E-B program is “the largest monetary awards program for educators in Texas&rdquo; and being named a finalist has spotlighted Perez as “one of the best educators in Texas.&rdquo;

Wednesday morning, H-E-B representatives visited her classroom with a cake, balloons, flowers, and a check for $1,000. Pearson Elementary also received a $1,000 check.

The Lifetime Achievement Award honors teachers in Texas with more than 20 years of experience. Perez has been with MCISD for over 34 years, and she says she is still learning every day.

“I grow every day, I learn different things,&rdquo; Perez said. “In return, I need to get them ready for everything.&rdquo;

Perez attended Pearson Elementary School growing up, and began her educational career as a teacher aide at that very school in 1974. In the early 80&rsquo;s, she became a teacher and worked at the McAllen Independent School District before returning to her roots in Mission.

“This [the award] is unexpected,&rdquo; Perez said. “There are so many things that you do, and you care because of the kids, you never expect to be recognized.&rdquo;

Perez considered being a finalist a plus in her career experience.

“I will cherish this,&rdquo; Perez said.

Finalists are nominated by H-E-B customers, community members and employees. The press release from MCISD said that nominees are “sent an invitation to complete an application online and asked about their professional experiences, educational philosophies and achievements both in and out of the classroom.&rdquo;

After that, judges review the applications, narrowing the field to semi-finalists. Then, five regional judging panels comprised of former winners, administrators, and university and community leaders not affiliated with H-E-B select 40 teacher and principal finalists.

Perez said she was shocked when they knocked on her door Wednesday morning to let her know she had become a finalist.

“They opened the door and I saw the administration, and all these people, and I was like ‘Oh my God!,&rsquo;&rdquo; Perez said. “So I started to cry a little, and then I stopped myself.&rdquo;

Perez says she has found that the best way to engage children in the classroom involves bringing examples to their particular level and making it part of their experience.

“I try to let them know that everything is possible, they can succeed,&rdquo; Perez said. “When my husband says it&rsquo;s time to retire, I say ‘If I cannot get up one day and be happy, then I will [retire]. Because I&rsquo;ll have no need in the class.&rsquo; But if I can still enjoy my children, I&rsquo;m still here.&rdquo;

In May, Perez will travel to Austin to compete at the state level for more cash prizes. Winners of the Lifetime Achievement Award receive $25,000 for themselves and a $25,000 grant for their school.

MCISD has past H-E-B Excellence in Education award winners still at the district, who will be reaching out to Perez in order to let her know what to prepare for in May.

“We know that it is very well-deserved,&rdquo; Dr. Perez said. “She&rsquo;s a top-notch teacher, and she deserves the recognition.&rdquo;

Pearson Elementary School Principal Melissa Davis said that if anyone had earned this nomination, it was Rita Perez.

“This is a first for Pearson Elementary, and we wish her the best,&rdquo; Davis said. “She has a very positive impact on everybody, she&rsquo;s always willing to help.&rdquo;

Davis noted that Rita Perez has come a long way since her career began, and has become a great example for all educators at the school.

“She knows what it&rsquo;s like to be a paraprofessional, struggle to go to college and become a teacher,&rdquo; Davis said. “We have a few [here] that are doing that right now, so she&rsquo;s a role model on campus. She motivates, she&rsquo;s enthusiastic, and more than anything, she&rsquo;s positive.&rdquo;