This story was originally published in the Progress Times issue dated Friday, Feb. 15, 2019.

Despite the cold and rainy weather this past weekend, concerned students, parents and law enforcement officers gathered to speak on the issue of teen dating violence.

The 4th annual Young Hearts Matter event drew students and administrators from across the Rio Grande Valley last Saturday afternoon to Lamar Academy in McAllen. Although it originally included a 2K walk at McAllen Veterans Memorial Stadium, that portion of the event was cancelled because of the forecast. 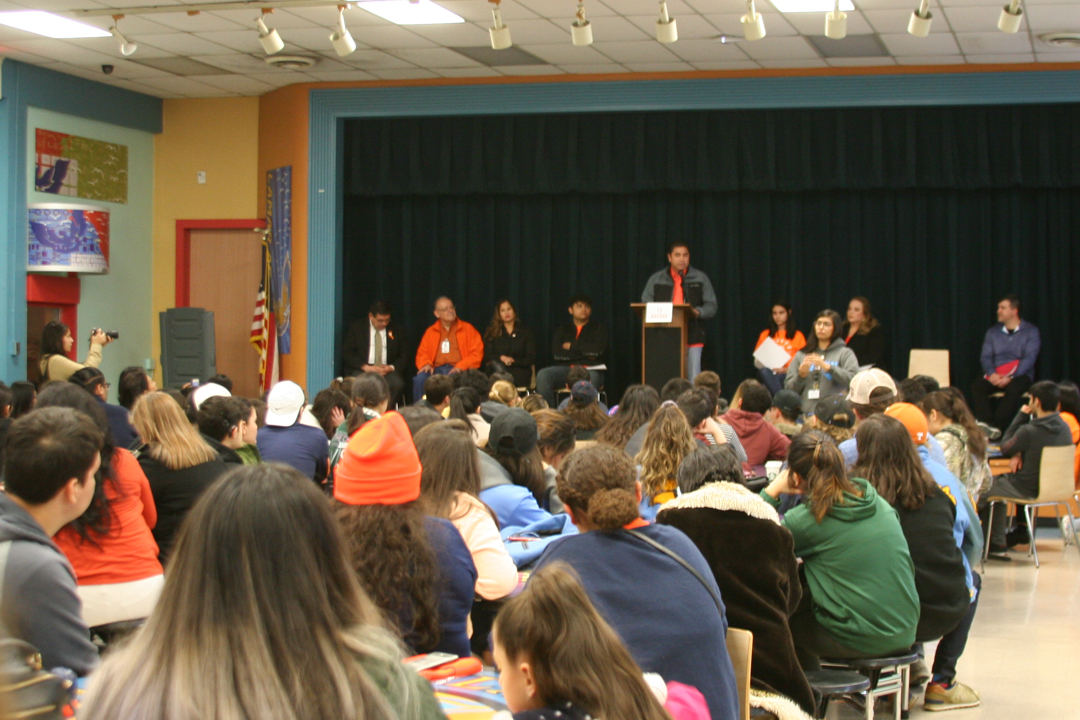 The other parts of the event continued as scheduled, and students and administrators wearing orange in solidarity gathered, rain coats and all, in the Lamar Academy cafeteria in order to hear what the speakers had to say.

According to the Centers for Disease Control and Prevention, the 2017 National Youth Risk Behavior Survey found that 8 percent of high school students reported physical violence and 7 percent reported that they experienced sexual violence from a dating partner in the 12 months before the survey.

A CDC Report titled “The National Intimate Partner and Sexual Violence Survey” found that among victims of contact sexual violence, physical violence, or stalking by an intimate partner, “about 26% of females and nearly 15% of males first experienced some form of violence by that partner before age 18.”

Young Hearts Matter was created in order to bring awareness on teen dating violence to young people across the Rio Grande Valley.

Each speaker had unique perspectives, and some even gave their testimonies about similar dating experiences they found themselves in. Karina Garcia, a student at Lamar Academy, told her story about a bad relationship she was in and what it took for her to get out of it.

“It’s not just me,” Garcia said. “In fact, 94 percent of those age 16 to 19 are victimized by a current or former boyfriend or girlfriend. It isn’t normal for someone to disrespect you.”

Garcia asked her peers to look out for warning signs in their own relationships, and said that if they found themselves in her situation, it’s okay and necessary to tell someone they trust like a parent, teacher or counselor.

Several speakers after Garcia commended her for her courage to step forward. Patty O’caña-Olivarez said she was encouraged by Garcia’s testimony and felt able to speak about her own bad relationship when she was 18 years old.

DA Rodriguez spoke about the importance of being aware of teen dating violence in the community.

“We’re here for a reason: we’re here to start a conversation,” Rodriguez said. “We started this campaign four years ago, and it has grown.”

Rodriguez said his office was getting several calls about
this issue, and they decided to do something about it.

“We’re here because we care about you,” Rodriguez said. “We want you to know that we are going to stand with you and be beside you throughout your education.”

“It’s difficult,” Rodriguez said. “Every day we work with victims who are afraid to talk about what’s going on with them.”

“We’re here to make sure that we have this conversation here, in your homes, in school, with your friends, about teen dating violence and other issues that go on in your school,” Rodriguez added. “You should not be afraid. Because we are here to help. We’re here to support you.”