This article was originally published in the Progress Times article dated Friday, Feb. 15, 2019.

For the first time in its 18 years since it was incorporated, Sullivan City will be entering in a sister city agreement with a neighboring city across the border. 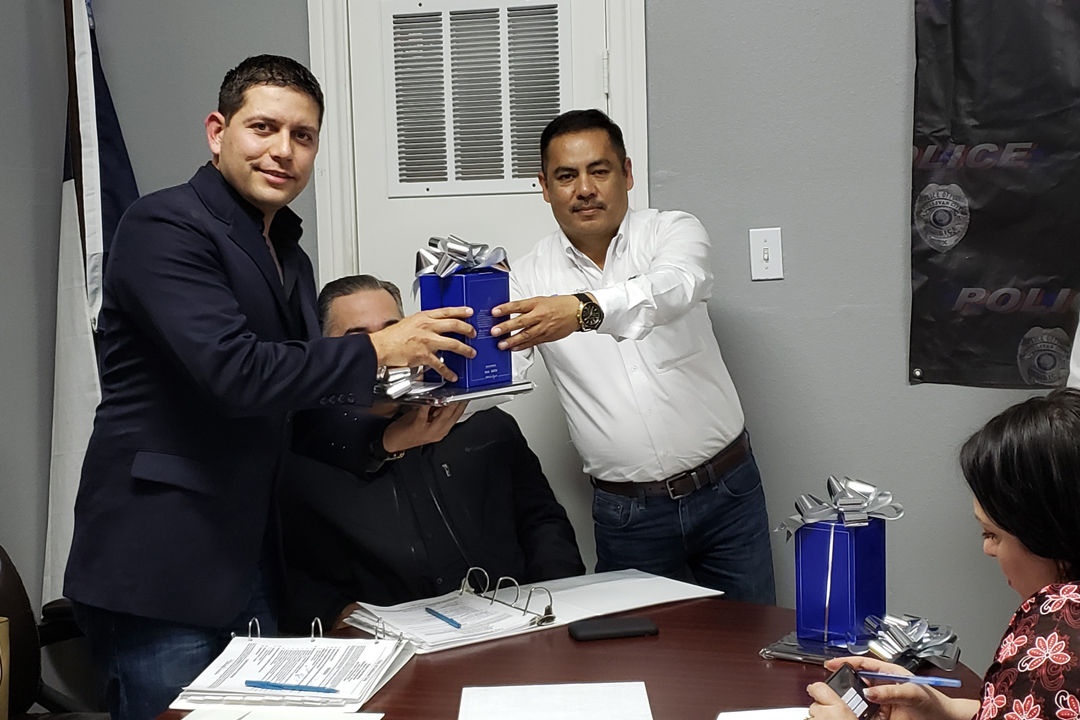 “It’s a way to show that we’re neighbors and we have a lot to offer each other,” Sullivan City Mayor Leo Garcia said.

Jose Manuel Lopez Hernandez, Mayor of Gustavo Diaz Ordaz, spoke to those in attendance in Spanish on the incoming sister city agreement. “We’re neighbors, the idea is to have ties with Sullivan City and start to recognize that the people of Sullivan City have friendly neighbors in a quiet town filled with generous, noble people who want to share with them,” Hernandez said.

As a sign of this friendship, Sullivan City will host their first International Cook Off and Festival next month. The cook-off, which will be held Saturday, March 30, will include cash prizes, folklorico and mariachi performances from Gustavo Diaz Ordaz and more.

“They’ll be bringing something from their culture here,” Garcia said. He and consultant Ramon Segovia both received a bottle of tequila and a planner from Hernandez as a token of appreciation.

According to Garcia, this is the first time in the history of Sullivan City, which was first incorporated in 2001, that they had a sister city. The neighboring cities of Mission and Palmview have sister cities, which are agreements between cities in geographically and politically distinct areas to promote cultural and commercial ties.

At that same meeting, city officials held a public hearing on the cities proposed municipal building which would be located on Paloma and 4th Streets.

The project consists of a 13,000 square-foot public safety building that will be the city’s new city hall and police station. The property would sit on the eastern portion of the land that formerly belonged to the La Joya school district before they donated it to Sullivan City for the purpose of building a park, library, learning center, city hall or fire department.

Designs released by the engineering firm Brighton Group LLC show that the city is also planning a soccer field, a new fire station, a community center and a library in those 10 acres. The city will fund the projects through the U.S. Department of Agriculture’s Rural Development program, U.S. Department of Housing and Urban Development’s Community Development Block Grant program and Hidalgo County Urban County Program.

The new city hall would replace the tiny building currently used, which stands in the city park on Cenizo Street. Wednesday’s meeting drew in a crowd so large that most of the people were outside the building as the conference room where the meetings are held was standing room only.

“As you can tell from the crowd, a new city hall is very much needed,” Garcia said of the planned developments.