President Donald Trump’s declaration of a national emergency last week to receive billions more in border wall construction is creating a heightened call to action in the Valley.

That’s according to Jonathan Salinas who, along with nearly 200 other protestors, showed up last Saturday at the Bentsen-Rio Grande Valley State Park at a protest march to demand a stop to border wall construction. 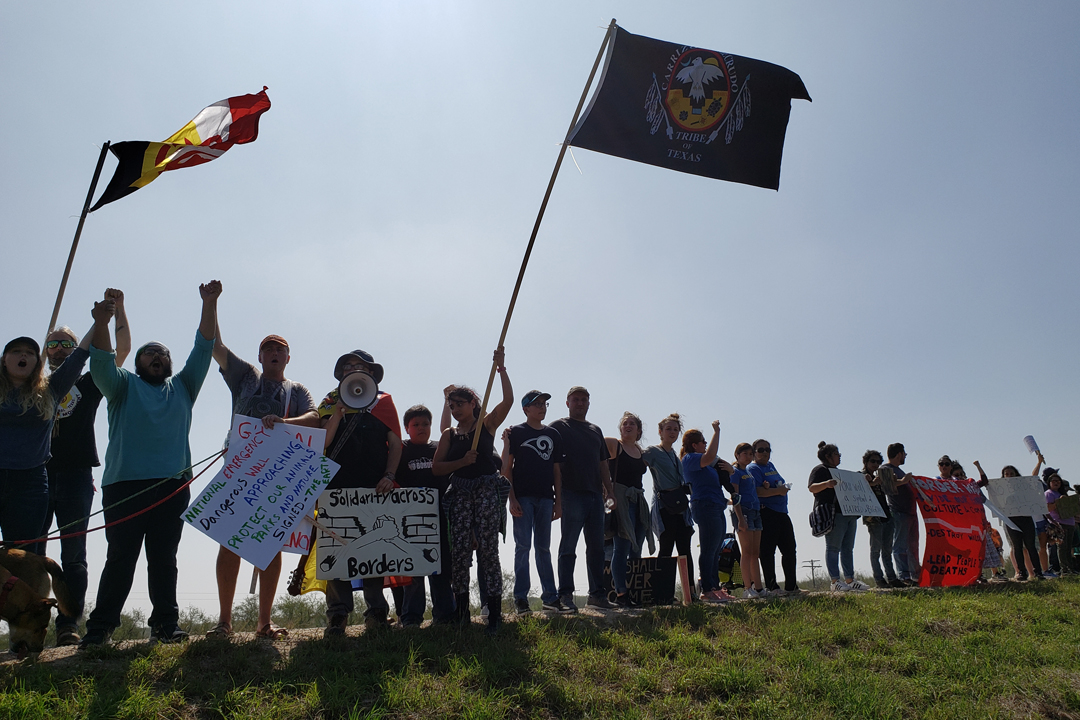 The national emergency declaration occurred after republicans and democrats agreed to prevent a new government shutdown by funding the Department of Homeland Security for nearly $1.4 billion. Part of that funding would go toward financing 55 miles of new border fencing in the Rio Grande Valley. With this declaration, the president has access to more money for border wall construction.

“Border wall construction needs to stop, no more money needs to be made to build this,” Salinas said. “The president’s actions heightens the need for more protests. This is a way for people to vent and express their frustrations and it is definitely a call for more actions. It feels like none of the branches of government have been helpful in hearing our concerns so we need to organize ourselves to revitalize, not militarize.”

Trump’s emergency declaration has been met with criticism from state representatives.

Congressman Henry Cuellar (TX-28), who had previously announced that he had secured language to protect “environmentally sensitive areas” from border wall construction such as the Bentsen State Park, La Lomita Chapel and National Butterfly Center, called the declaration a violation.

“The President’s declaration of this ‘so-called emergency’ is a violation of constitutional authority to reallocate billions of federal dollars that have been already appropriated by the U.S. Congress,” Cuellar said in a statement. “He is taking money away from the military, from our law enforcement officials and from many other needed services. His intent is to bypass congressional authority, the power of the purse which belongs to congress under our constitution, and follow through on his campaign promise.”

Scott Nicols of the Lower Rio Grande Valley Sierra Club aid that with the emergency declaration, a lot of confusion will probably arise due to the access of more funds.

“The current administration scan claim that since they now have access to a lot more money to build a lot more walls, the places Congress exempted can be walled off,” Nicols explained “ I think a lot of lawyers will claim that is not the case but people still need to turn out. They need to put as much pressure on Congress as possible and Congress needs to override Trump’s emergency declaration and pull back the money they gave him.”

The march ended at the levee behind the neighboring National Butterfly Center, which is 70 acres that the center will lose once the border wall construction begins. The protestors joined hands and lined up along the levee.

Earlier this month, the center and the North American Butterfly Association filed a restraining order against the federal government to prevent border wall construction on its property. The lawsuit was dismissed Thursday, Feb. 14.

“I’m glad the community came out to enjoy our green space while it remains intact,” NBC Executive Director Mariana Trevino-Wright said at the protest. “The issue is the state of emergency invalidates these protections put in place for us and now the president is claiming he can take those other $8 billion and use them however he wants. It’s completely illegitimate, there is no emergency here on the border and I hope Congress and our courts will overturn it rapidly.”