At the start of district play, the Sharyland Pioneer Diamondbacks felt the sky was their limit. Head Coach Rene Gonzalez knew his team had the potential, but it was up to them if they wanted to reach that level.

Fast-forward two months and 15 games later and the Diamondbacks are now raising their second trophy of the season after picking up a Bi-district Championship Tuesday night with a 61-53 win over Brownsville Pace in the first round of the Class 5A playoffs at La Feria High School. 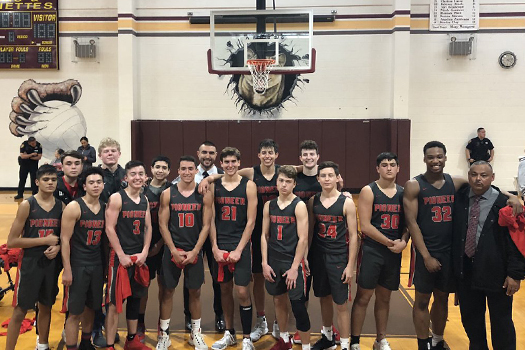 “A lot of people underestimated us this year, so we had to just prove them wrong,” said senior post Aaron Cuevas after a 17-point playoff performance. “We came out here with the intention of getting to the second round, getting to the third round and making it to the regional tournament. We just wanted to shock the world, basically.”

Cuevas and the Diamondbacks had the crowd in shock multiple times throughout the night as he raised up and dunked the ball on four separate occasions, sending the roaring Sharyland Pioneer faithful out of their seats.

After storming out to a 38-21 halftime lead behind the play of big man Lavar Lindo and guard Luke Padilla, Brownsville Pace found a way to climb back in to trim a once 21-point lead to just four points in the fourth quarter. That’s when Cuevas and Lindo came through with big play after big play including a Lindo pass which led to a Cuevas dunk.

“It’s everything, being able to do it in this atmosphere is amazing,” Cuevas said. “This is what I wanted; I wanted to get here so we can showcase our talent to everybody and I wanted to prove it with this team and get to the second and third round.”

Lindo was a force all night for the Diamondbacks as he scored a team-high 20 points. When the team needed a bucket, they went down low to the junior post who knew exactly what to do with the rock.

“I felt good,” Lindo said after coming through in the clutch for his team. “I was showing my team that I can be a leader and step up if somebody isn’t feeling it, but tonight, we were all feeling good because we all played as one. Keys were staying composed because we knew they were going to be ready to go. We knew we had the experience, we just had to keep our composure and play our game.”

The Sharyland Pioneer Diamondbacks (27-8, 13-1) are now onto the second round of the Class 5A playoffs where they’ll face the Corpus Christi Miller Buccaneers (27-10, 14-2) at 3:15 p.m. Saturday at Santa Rosa High School in Santa Rosa.

Mission Veterans Patriots
Mission Veterans Memorial ended a three year playoff drought under Head Coach Jose Ramos which earned the Patriots the third seed in District 31-5A and a home matchup against Brownsville Veterans in the opening round of the postseason.

The Patriots went punch-for-punch with the Chargers through the first three quarters at Mission Veterans Memorial High School and trailed Brownsville Veterans by four, 42-38, with just eight minutes left in the game. Despite a strong start, the Patriots ultimately fell to the Chargers 59-45, bringing their season to a close.

Mission High Eagles
Mission High made their first playoff appearance in 10 years and they got to do it in front of their home crowd Monday night as they hosted Class 6A’s 23rd ranked team in the Laredo United Longhorns.

Head Coach Rico Martinez and the Eagles managed to keep things close in the first half before heading into the locker room down 28-18. In the second half, however, the Longhorns extended their lead to 20 to earn a 55-35 win over Mission High.

The Mission Eagles’ season ends at 19-16 overall with a 9-5 district record.