A lesser-known part of American Civil War history in the RGV was brought to light this week at the University of Texas Rio Grande Valley.

During an event leading up to the annual Festival of International Books & Arts (FESTIBA), a locally produced documentary film entitled “Just a Ferry Ride to Freedom,” focusing on the Texas-Mexico border and its connection to the Underground Railroad, was screened. 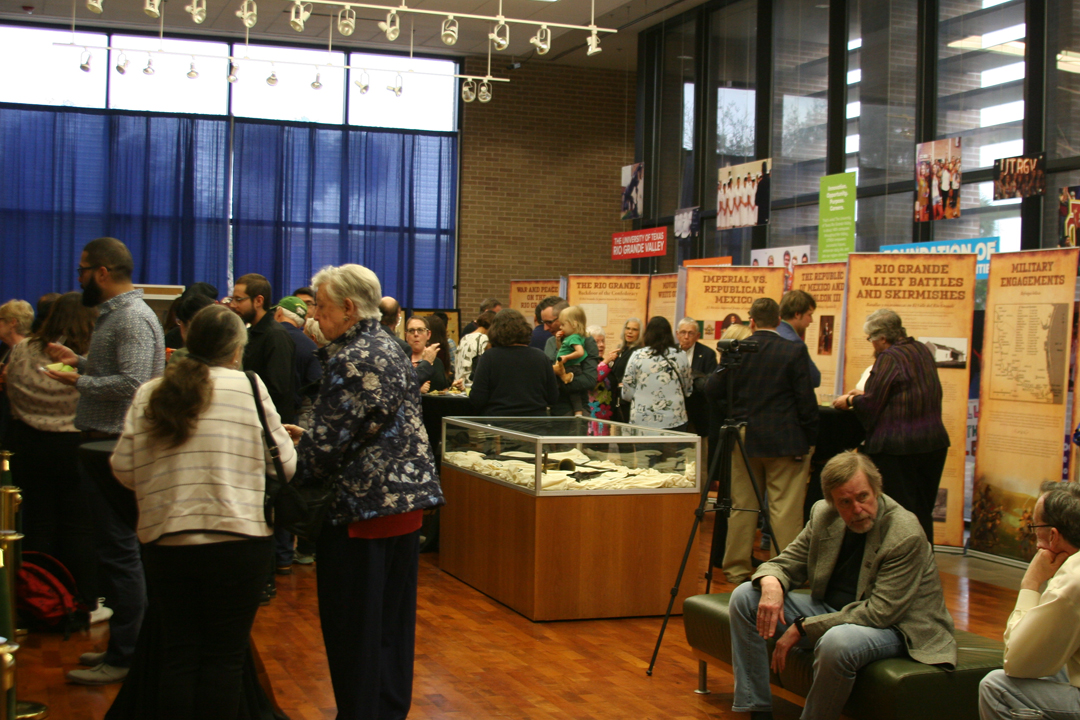 The reception prior to the screening was held at the UTRGV Visitor’s Center, where guests gathered to view various artifacts in an exhibit called “War and Peace on the Rio Grande” pertaining to the Valley’s role during the Civil War, and how history was made in the pre-Civil War era.

Admission was free, and community members, participants in the documentaries and representatives of family cited in “Just a Ferry Ride to Freedom” filled both the Visitor’s Center and the Performing Arts Complex, where the film was shown for the first time.

The documentary was produced by the UTRGV Community Historical Archaeology Project with Schools (CHAPS) program through funding from the Houston Endowment, The Summerlee Foundation and the UTRGV College of Liberal Arts.

“This is what education really should be,” Dr. Pamela Anderson-Mejias, Senior Associate Dean of the UTRGV College of Liberal Arts, said. “It brings together faculty from all different types of schools: science, anthropology, history and so on. It impacts our students, they impact our community.”

“Just a Ferry Ride to Freedom,” produced and written by Dr. Nick Taylor, focuses on pre-Civil War Texas along the Rio Grande River in Laredo and Brownsville, highlighting the “mixed-race ranches in Hidalgo County” and shows “how culturally diverse the Rio Grande Valley actually is.” During this time, lifeways were developed that are still significant and used to this day.

Several community leaders, ranchers and historians were featured in the film itself, and they spoke on how the Valley was a stopping point as slaves during the Civil War sought freedom in Mexico – which had already made slavery illegal. Finding a kind of safe bubble in the RGV, many African Americans settled in the area, entering mixed-race marriages and starting culturally and ethnically diverse families that still live in the area today.

“In this exhibit, ‘War and Peace on the Rio Grande,’ you’ll find the story that Ken Burns missed when he did his film series 25 years ago,” Dr. Russell Skowronek, an executive producer of the documentary and part of the CHAPS program, said. “Tonight, as part of Black History Month, we share these stories with you in our exhibits, in our short films and in the premiere of our new film.”

Skowronek said these stories are from people in the area with names that many people in the RGV are familiar with, like the Jacksons, the Webers, the Singleterrys, the Champions, the Brewsters, the Rutledges and more. For Roseann Bacha-Garza, the CHAPS Program Manager, preserving the history of the RGV is the program’s main goal.

“We like to showcase our work so that those who are born and raised here and those who are recent residents of this place know about the rich and valuable history of this region,” Bacha-Garza said before the screening. “We try to give everyone something to be proud of.”

Dr. Nick Taylor also spoke prior to the premiere, saying that everyone who contributed to the making of the documentary had an impact on the final product coming together.

“I think so often our Valley is looked at as a place of less importance, of not having value to the rest of the United States,” Taylor said. “And documentaries like this and stories like this help highlight how important we are, not only to Texas but the United States, and in fact through this you might start seeing, to the entire world.”

No word was given as to when “Just a Ferry Ride to Freedom” will be screened or made available to be seen, as CHAPS is hoping to enter it into several festivals. Their last documentary project, “And Then the Soldiers Were Gone,” about Fort Ringgold in Rio Grande City, is now considered an award-winning film after taking several prizes in the festival and competition circuits.

FESTIBA, this year themed “Inspiring Communities and Celebrating Cultural Heroes,” was designed in 2006 to promote literacy and an appreciation of reading for all ages. Several events will occur at both the Edinburg and Brownsville UTRGV campuses from Feb. 25 through March 3.