Miriam Villaseñor wants to make her organic salsas available to the public.

During this week’s regular meeting at the Mission Economic Development Corporation, Villaseñor was named the only winner of this round of Ruby Red Ventures, a program that has been ongoing at the EDC for seven years. 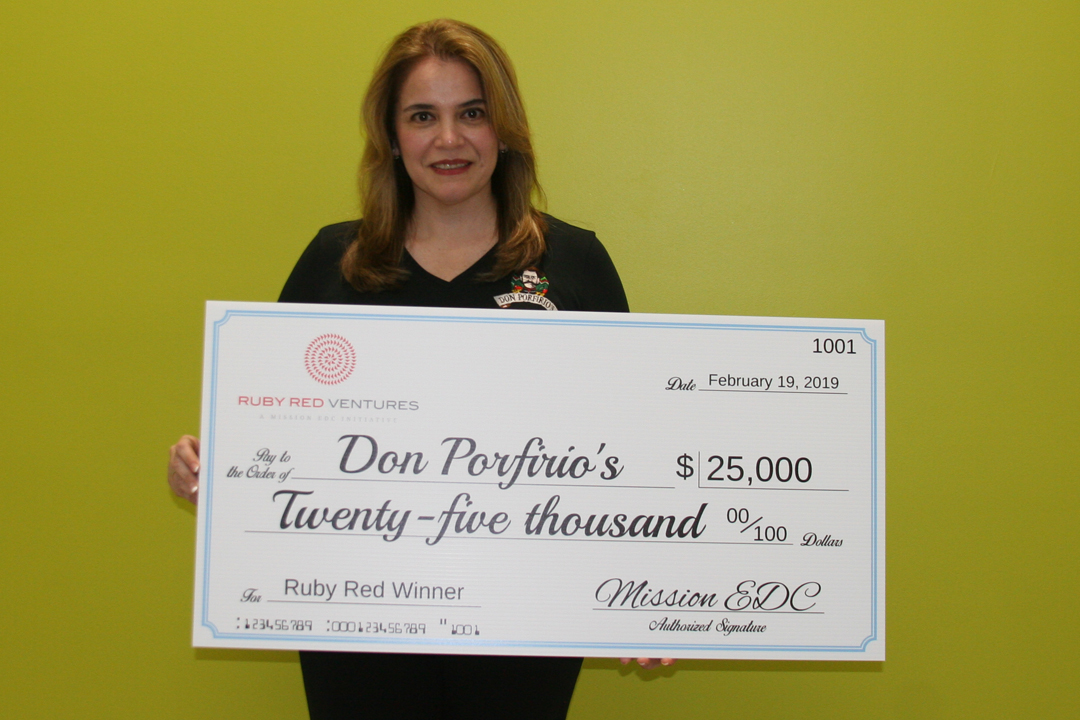 The Ruby Red Ventures program allows local business owners to pitch their burgeoning companies and products to the EDC. Winners are awarded with monetary prizes that will go toward growth and making their ideas successful.

According to Mission EDC Chief Executive Officer Daniel Silva and Director of Social Impact Cristina Garza, the Ruby Red Ventures program is about to undergo some changes.

“We actively promote the increase of innovation, entrepreneurship and small business support,&rdquo; Silva said. “Cristina and I are looking at revamping the program, because we need to make it a 2.0, a new level.&rdquo;

Silva said that the EDC has had companies tell them that even though they did not win, they were glad for the experience because they&rsquo;ve been able to learn several things from the process.

Mission EDC has helped other municipalities set up their own versions of Ruby Red Ventures, including Hidalgo County, South Padre Island and Weslaco. According to Silva, Edinburg is also looking into setting up their own program as well.

“We want more support of the small business,&rdquo; Silva said. “We know that ultimately it&rsquo;s going to help the economy here.&rdquo;

Typically the program awards three businesses with cash prizes, but this time around Villase&ntilde;or was the sole recipient. She was given $25,000 for her company, Don Porfirio&rsquo;s, which specializes in 100 percent organic salsas.

Currently, Villase&ntilde;or is working to incorporate an organic chamoy into her product line, and hopes to make Don Porfirio&rsquo;s available at H-E-B. This was her second time applying to Ruby Red Ventures.

“We&rsquo;re very proud that Miriam is our last winner for the 1.0 version of Ruby Red,&rdquo; Garza said. “She came forward stronger than ever.&rdquo;

Villase&ntilde;or will be getting some advice from previous winner Pilar Gonzalez, who owns Dip It by Pilar, a yogurt-based dip that comes in five flavors and is also currently available at H-E-B.

“Gonzalez has agreed to mentor her [Villase&ntilde;or] and really take her under her wing,&rdquo; Garza said. “She&rsquo;s going to take her through that process of going from cooking in your house to really producing for a mass market.&rdquo;

For Villase&ntilde;or, who is looking for equipment to further ensure her product stays fresh without preservatives, the prize money is going to help her business grow.

“I&rsquo;m trying to do this 100 percent natural,&rdquo; Villase&ntilde;or said. “I&rsquo;m looking everywhere, and everyone is selling things with preservatives and chemicals.&rdquo;

Villase&ntilde;or described being awarded through Ruby Red Ventures as a dream she doesn&rsquo;t want to wake up from.

“I feel like this program helps a lot of people like me, who want to do things and grow,&rdquo; Villase&ntilde;or said. “Because, wow. This is very good.&rdquo;