After serving the city of Mission for 18 years, Randy Perez has been named the new city manager.

Perez, who was working as the interim city manager, was promoted to the position following executive session of this week’s city council meeting. He has served the city under several titles over the years. 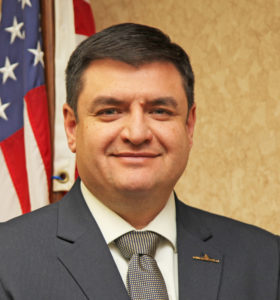 Starting in the finance department, Perez moved from a part-time capacity to full-time after getting his bachelor’s degree in accounting and his master’s degree in public administration from the University of Texas Pan-American.

In 2014, Perez returned to school, earned his master’s and became a certified public manager. He said he did so in order to better provide for the Mission community and eventually be prepared for the position of city manager.
“It’s always been something I’ve been working towards,” Perez said. “It’s been one of my major goals, to get to this position.”

Perez worked mostly in the finance department, and was the finance director before being named a deputy city manager (where he was for three years). Born and raised in Mission, Perez said he knows the area very well.

“I’ve had about ten different titles with the city in those 18 years in different levels and different capacities,” Perez said. “

The council awarded several bids for different ongoing projects this week, signaling the continued growth Mission has been aiming to achieve. Perez intends to keep the city moving forward.

“It’s a humbling experience, and an honor to serve in this position for this great community,” Perez said. “I thank the mayor and council for giving me this opportunity and having the vote of confidence to allow me to serve this community in this capacity. It really means a lot to me to have their support.”