The city of Peñitas is celebrating centuries worth of history within its own cemetery.

At a ceremony last week, the city unveiled a historical marker from the Texas Historical Commission for the St. Anthony Cemetery, a cemetery that has been with the city since 1836. 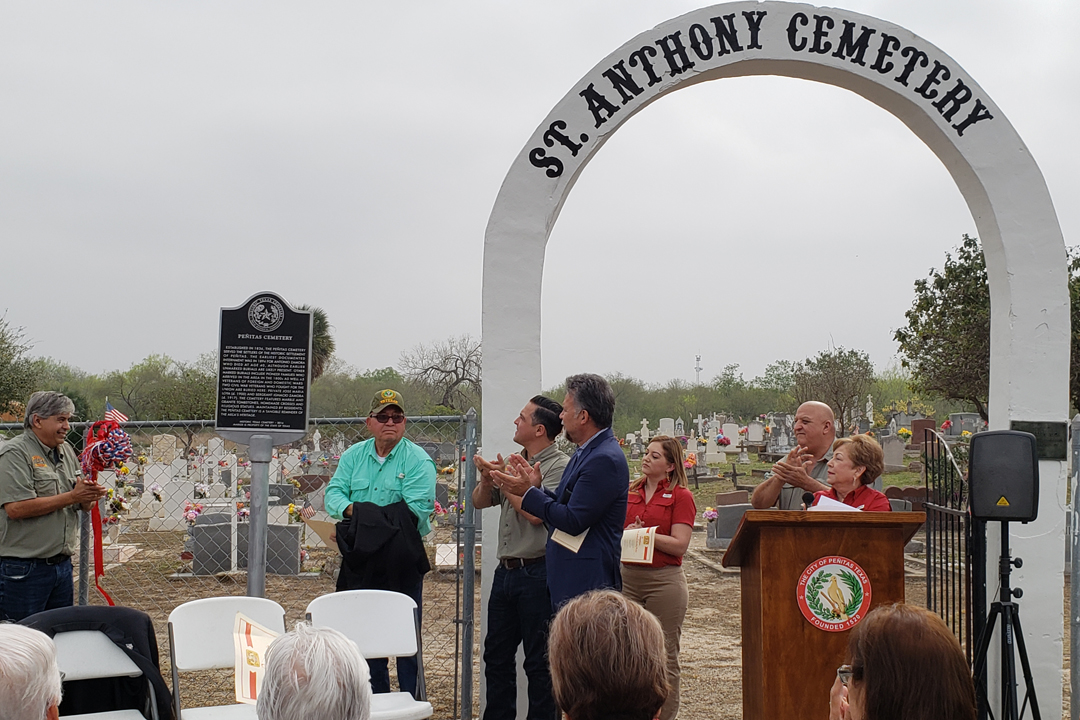 “Established in 1836, the Peñitas cemetery served the settlers of Peñitas,” the marker states. Marked burials include pioneer families who arrived in the area in the 1800s as well as veterans of foreign and domestic wars. Maintained by residents, the Peñitas cemetery is a tangible reminder of the area’s heritage.

The marker is the first of its kind for the city, according to Adalia De Luna, secretary for the Peñitas Historical Society. The cemetery, which is 1 1/2 acres, holds 500 marked burials and an additional 120 unmarked burials due to the headstones having rotted and erased the names of the deceased, De Luna said.

“The Texas Historical Commission has recognized the Peñitas cemetery as a significant part of Texas history by awarding it this marker,” De Luna said. “This holy place is vital to the new generation so they will not forget our past ancestors and provide awareness in the history of the community of Peñitas.”

According to oral history, Peñitas was established in the 1520s by a priest named Father Fray Zamora and five Spaniard explorers who have descendants buried in the cemetery.

Among the other people laid to rest at the cemetery include Sinforosa Perez Mandujano, the town midwife who delivered newborns to the city and passed away in 1962 at the age of 79. She was known as the mother of Peñitas.

The cemetery also has the final resting place of Jose Maria Loya and Ignacio Zamora, who were veterans of the Civil War.

“Peñitas has been established since 1520 and it’s our job to keep it going,” Lopez said. “With this marker, people will keep telling those stories alive.”

During the ceremony, State Sen. Juan “Chuy” Hinojosa spoke on the importance of the history of the city, which is believed to be among the oldest in the state.

“We have soldiers from the Civil War, WWI and WWII here, this place has a lot of history and its possible new generations will forget our past, who built all of this and everything that came before them,” Hinojosa said. “It’s important that our stories recognize this cemetery. The cemetery is us.”