Connor Williams has come a long way in a short amount of time. 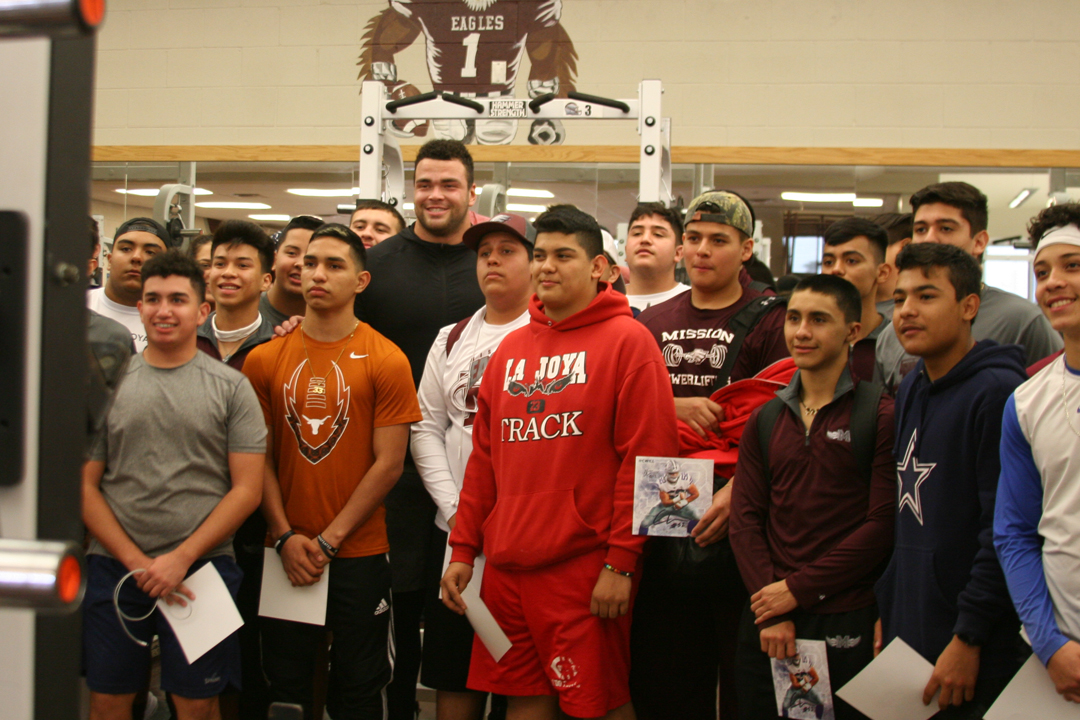 Self-described as extremely close with his family, Williams was raised in Coppell, Texas, just outside of Dallas. He attended the University of Texas in Austin on a football scholarship, and was accepted into the McCombs School of Business before leaving in his senior year for the 2018 National Football League Draft.

Williams was picked by the Cowboys in the second round of the draft, and named the starting left guard. His mother has family in the area, who Williams was visiting.

“It&rsquo;s an amazing opportunity,&rdquo; Williams said. “Being able to come back as a Dallas Cowboy and being able to speak to kids is great.&rdquo;

Williams&rsquo; brother encouraged him to speak to local students, believing that his message would resonate with those aiming to find success despite growing up with adversity.

For the professional football player, his height and size were not always celebrated by others his age. Williams said that as a child, kids would bully him for his size and the speech impediment he used to have.

Williams ended up in in-school suspension after defending himself from a few of his bullies, and realized that his niche was really with his family.

“I stuck with my family,&rdquo; Williams said.

When he visited LJISD last Thursday student athletes from all three high schools, as well as a visiting group of athletes from the Flour Bluff Independent School District, gathered at the Alejandro H. Saenz Performing Arts Center to listen to Williams.

During his speech, Williams gave examples on how he overcame his hardships growing up.

“I went to my dad and said ‘Dad, I want to change, I want to be better, I don&rsquo;t want to be made fun of any more,&rsquo;&rdquo; Williams said. “I wanted to take control.&rdquo;

They set up some goals for Williams like working out daily, which eventually led him to his current position in the NFL.

“Whether the adversity be school, your sport, whatever it may be, it&rsquo;s going to happen in your life,&rdquo; Williams said. “It&rsquo;s about how you respond to that adversity.&rdquo;

Williams said that he and his father were awake at 6 a.m. every day and usually did P90X workouts.

“It&rsquo;s about how you handle the adversity and how you respond to it in the end,&rdquo; Williams said. “At the beginning of the day you have to set your goal, and you&rsquo;ve got to pursue that goal.&rdquo;

Before and after the talk, Williams signed several things for the school and students and posed for pictures. He also took several student questions from the crowd, which ranged from what the maximum weight he bench pressed in college was (505 pounds) to what he has learned from his teammates (making sure they are 100 percent on top of their game when it comes to fitness, health, diet and taking care of their body).

“Find your path, stay true to it,&rdquo; Williams said. “There&rsquo;s mornings where you don&rsquo;t want to wake up, when you just want to stay in bed and sleep in.&rdquo;

“There&rsquo;s mornings where you have no energy to do a set or excel in class; it&rsquo;s about reminding yourself what your goal is,&rdquo; Williams added. “It can&rsquo;t just be a thought, it&rsquo;s got to be a constant reminder day in and day out. Every challenge you hit has to be because of the goal that you&rsquo;ve set. Is it making you better, or is it making you worse?&rdquo;

The next day, Williams got a quick private workout in the fieldhouse by Tom Landry Stadium at Mission High School. While students were not in school that day, a track meet was hosted at MHS, so a small group of athletes got to watch part of Williams&rsquo; workout and hear what he had to say about pushing through difficult times.

“It takes a special type of person to be a student athlete,&rdquo; Williams said. “I know what it&rsquo;s like going to sleep sore at night and having to wake up in the morning and get out of bed still sore.&rdquo;

Half Mexican and half Caucasian, Williams has found that embracing both heritages has given him the support to prosper.

“I love to embrace my Mexican heritage,&rdquo; Williams said. “Growing up in Coppell, my big family was around me and supported me all through [my journey]. I know that&rsquo;s kind of the backbone of my Mexican heritage, so being able to come down and reach kids and relate with them is great.&rdquo;

Because of his relation to the area, Williams felt the need to speak to high school students on how success can come from anywhere with hard work and determination.

“I was in their shoes four years ago,&rdquo; Williams said. “I know the things they&rsquo;re going through and I hope to serve as an inspiration to them, to talk to them, to give back.&rdquo;