Desirae Lynn Vasquez had no idea that spending the night at a friend’s place would result in her arrest.

Vasquez, 18, was at a party with classmates last April and decided to spend the night there, she said. However, police arrived to the party in response to a noise complaint leading to the arrest of Vasquez and other individuals after police found cocaine at the scene. 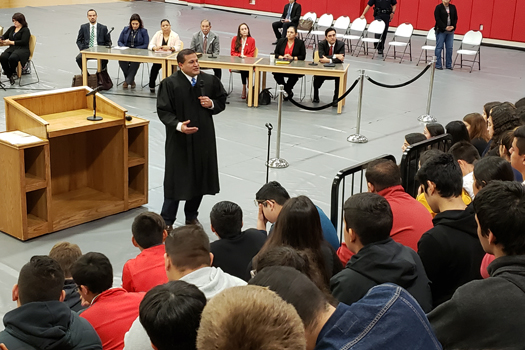 “It was terrible, I went to bed thinking I’d wake up in that bed but instead I spent three days in jail,” Vasquez said. “I was the only person my age there, and I was terrified I’d be in jail for years.”

Vasquez recounted this story during her hearing in front of 398th District Court Judge Keno Vasquez last week. She was one of seven defendants the judge presides over during their hearings in front of the Sharyland Pioneer High School Student Body as part of the Courts in School program.

Students from Pioneer witnessed the decisions Vasquez made firsthand to familiarize students with the judicial process and to illustrate the consequences of illegal activity.

The defendants had charges that included driving while intoxicated and possession of marijuana, both of which are 3rd degree felonies.

Vasquez, who was facing a charge of Possession of a Controlled Substance- a second degree felony punishable with two to 20 years in prison and a fine of up to $10,000, had the most serious crime. She was a high school senior when she was arrested, she told the crowd.

“She looks like she could be a classmate of yours,” Keno told the students. “Like her, you could be at the wrong place at the wrong time or driving around with someone who has drugs on them that you don’t know about, but guess what? You can still get arrested for that. We’re all going to make mistakes. Today is about waking you up so you can learn from your own mistakes and those of these people.”

Keno, whose court handles civil and criminal matters, decided to dismiss the charges against Vasquez following recommendation from the defense counsel. The decision caused Vasquez to erupt in tears.

Before her dismissal, Vasquez explained to Vasquez that following her arrest she was working to get her life back in order. She started working for the department store Ross and was studying business at South Texas College.

Vasquez was planning on being an FBI agent but after her arrest, she admitted that she was terrified of pursuing her dream.

“I’m dismissing these charges against you, you can still do it,” Vasquez told her.

“We’ve got kids who want to be attorneys and judges and they get to see this in action,” Vidaurri said. “We also have an opportunity for all of us to look at our life choices, especially for our students who can see in person that in life, there’s consequences to every action we take.”

Vasquez said while the Courts in School program can work as a deterrent for unlawful student behavior, he had advice to offer students.

“If you ever see any classmates who have their heads down or are noticeably depressed, talk to them,” Vasquez said. “They may be going through something difficult and need someone to talk to. Sometimes just talking to someone is what prevents a student from doing something wrong that they can’t change.”