When a shady businessman asked former La Joya police Chief Geovani Hernandez to provide security for a drug shipment, something about the job seemed fishy. 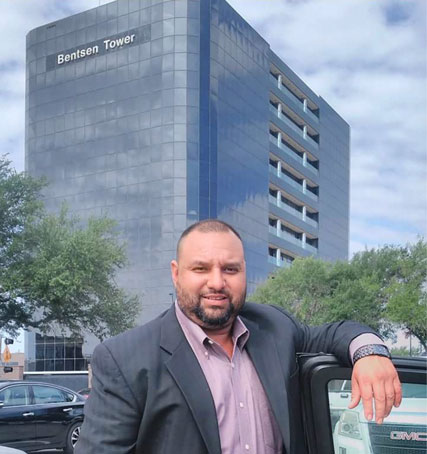 “Of all the shady people I have worked with before, none of them have asked to be escorted,” Hernandez said.

Whatever suspicions he harbored, Hernandez accepted the job. Agents with U.S. Immigration and Customs Enforcement arrested him less than a month later.

That’s how Geovani V. Hernandez, 44, of McAllen, a career cop who worked for eight Rio Grande Valley police departments during the past two decades, found himself in federal court Monday morning.

Hernandez is best known for running against Hidalgo County Sheriff Lupe Treviño and a brief stint as La Joya police chief. When federal agents arrested Hernandez in August 2017, he worked for the Progreso Police Department.

The criminal charges crushed him.

Hernandez separated from his wife and moved to a trailer park in McAllen. He struggled with depression, couldn’t find work and lost a lifetime of law enforcement connections. Hernandez recently accepted part-time jobs at Home Depot and Auto Zone to pay the bills.

“He’s here accused of very serious crimes,” said attorney Miriam Ayala, half of the husband-and-wife legal team that represents Hernandez. “And the government’s case is built around their confidential informant. His name is Hector Rodriguez.”

Saucedo-Rodriguez spent more than three hours on the witness stand Monday, walking the jury through a sting conducted by federal agents.

From March to July 2017, he surreptitiously recorded conversations with Hernandez.

While unquestionably the star witness, Saucedo-Rodriguez comes with serious baggage.

He admitted to stealing money, lying to federal agents and snorting cocaine. Saucedo-Rodriguez is also married to Maritssa Salinas, who pleaded guilty in a separate drug trafficking case.

In an attempt to reduce her prison sentence, Saucedo-Rodriguez became a government informant.

Perhaps the most egregious example of Saucedo-Rodriguez lying to federal agents occurred in June 2017, when he asked for $2,000 to pay Hernandez for information.

“That day I told the agents I was going to meet Mr. Hernandez at the same movie theaters where I had met with him the first time,” Saucedo-Rodriguez said Monday, speaking through a translator. “But I never saw him at the movie theater. I just kept the money that the agents had given me for him.”

Agents apparently became suspicious and confronted Saucedo-Rodriguez on July 31, when they provided him with $5,000 to pay Hernandez.

They asked Saucedo-Rodriguez if he actually paid Hernandez the full amount.

“And Mr. Saucedo said ‘No, I actually kept $2,500 of it,’” said Special Agent Raul Garza Jr. of Homeland Security Investigations, a division of Immigration and Customs Enforcement.

Whether or not Saucedo-Rodriguez’s credibility will become a problem for prosecutors remains unclear.

Saucedo-Rodriguez recorded conversations with Hernandez, which prosecutors played for the jury Monday. During the conversations, Hernandez always talked about drugs with euphemisms and analogies.

In July 2017, when Hernandez agreed to protect a vehicle headed from Progreso to Pharr, they scouted Farm-to-Market Road 1015 for cops. Saucedo-Rodriguez mentioned drug traffickers affiliated with the transportation job. Hernandez, though, didn’t want Saucedo-Rodriguez to talk about the details.

“You don’t know what’s in it,” Hernandez said to Saucedo-Rodriguez, referring to the vehicle, according to transcripts reviewed by the jury.

“Yes, I do know what’s in it,” Saucedo-Rodriguez responded.

“Don’t say anything,” Hernandez said. He later referred to the vehicle’s contents as “tomatoes.”

They didn’t mention drugs, but Saucedo-Rodriguez said they both knew the vehicle contained cocaine.

“You’re not going to get paid $5,000 to move tomatoes from Progreso to Pharr,” Saucedo-Rodriguez said.

Testimony is scheduled to resume Tuesday, when Saucedo-Rodriguez will return to the witness stand.

If convicted on the drug conspiracy charges, Hernandez faces 10 years to life in prison.