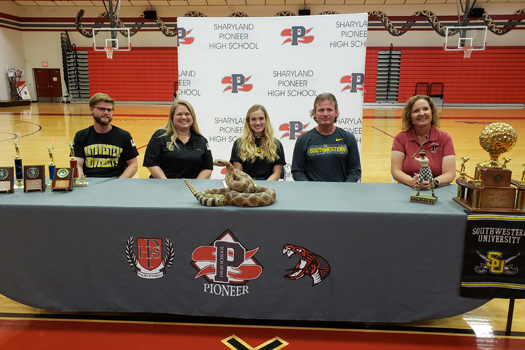 “I wouldn’t have this special opportunity without my supportive coaches, family friends and teammates,” Garza said at the signing. “I’m extremely excited to celebrate the next step in my career.”

Garza said she is interested in studying communications at Southwestern University but for now plans on going as an undeclared student.

Tom Lee, athletic director at the campus, praised Garza’s achievement at Pioneer over the years.

As a freshman, she was awarded newcomer of the year, received a silver medal in the district championship and was named first in the district and second in the all Valley competitions in her junior year.

In all those three years, Garza has qualified as a regional qualifier, Lee said.

“She’s currently ranked 4th overall in the Valley with an average of 79.56 and we expect her to continue to lead our team to the regional tournament this year,” Lee said. “The state tournament will be in Georgetown where she will be attending school so she’s excited for that.

“I’ve watched linsey grow these last few years and could not be prouder of the hard work she’s put in, this is the result of a tremendous amount of work that she’s put in,” Lopez said. “Southwestern University is gaining a strong member and as good as she is right now I don’t think she’s reached her potential. Until then, she will be an important addition to the team.”