Rodriguez began the Young Hearts Matter campaign with Rosie Martinez, a Victims Coordinator with Hidalgo County. It was created in order to bring awareness on the issue of teen dating violence to young people across the Rio Grande Valley. 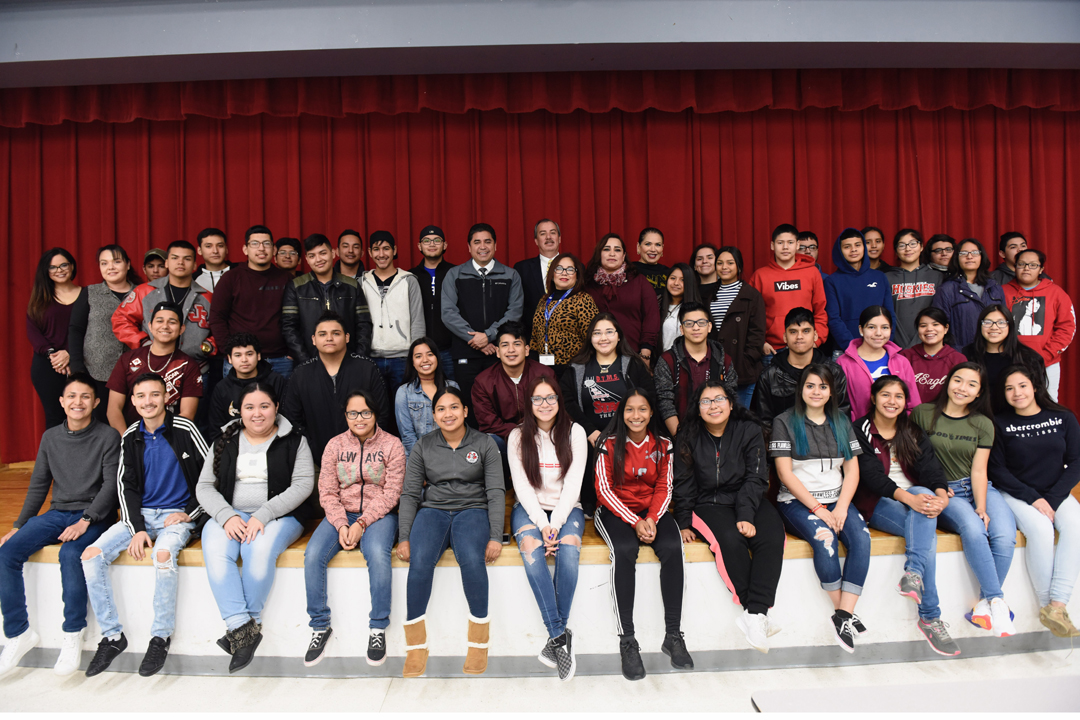 “Just last month, we were able to go to 32 schools,” Rodriguez said. “That all started here.”

The first Young Hearts Matter 2K Walk, held four years ago, was hosted at Juarez-Lincoln High School in the La Joya Independent School District. Rodriguez and Martinez were happy to bring the campaign back to the school this past Tuesday morning after Santos Palomo, the T-STEM Academy principal, called.

“It’s necessary to create awareness,” Palomo said. “Sometimes the community is not as informed as we are in the school.”

Palomo added that the district takes any opportunity they can to educate their students on these issues.

“The students need to understand the difference between a healthy and an unhealthy relationship,” Palomo said. “Their young hearts matter, they’re important, when they say no, it’s no. So it’s a great opportunity for them to hear it from someone else other than the people they normally work around with.”

This event followed this year’s fourth annual Young Hearts Matter presentation, which was held at Lamar Academy in McAllen on Feb. 9. Several local community leaders spoke on the prevalence of teen dating violence.

This week, the DA came back to Juarez-Lincoln to speak to a whole new group of students, which included those in the T-STEM Academy, Law Enforcement Academy and the Junior Reserve Officers’ Training Corps (JROTC).

An informational sheet was handed out to students, along with a pamphlet from the Hidalgo County Criminal Victims Unit. The pamphlet included several support services offered by the department, the rights of victims in Texas and prevention services.

Rodriguez and Martinez got more personal during this talk, citing different environments and circumstances that led them to where they are today.

“I was born in Edinburg to a 16-year-old mother and a 17-year-old father,” Rodriguez said. “They had an eighth grade education, and all they could do to support themselves and me and my brother was work in the fields.”

Rodriguez described his family’s tribulations while they worked as migrants, and said that because he didn’t have the ideal home life, he put all his efforts into his studies in order to succeed.

“My mom knew what it meant to get educated, she knew what she wanted from us,” Rodriguez said. “Going from being a migrant worker to trying to graduate from school was tough, because besides being poor, there were a lot of issues going on in school, just like today.”

He added that there are always several things going on in schools, and that the students should have the opportunities to attend classes and learn without having to worry about everything else occurring in their environment.

“Bullying, drugs, alcohol, teen dating violence, we know what’s going on,” Rodriguez said. “We know because besides the conversations that we have with individuals in the school district, we see it in the courtroom.”

As a Criminal Defense Attorney, Rodriguez helped start this campaign to address the cases of teen dating and family violence in the RGV.

Martinez, who has been with Victims Services for 19 years, spoke about a best friend she had when she was 14 years old who was murdered by her father. She said that since that experience, she knew she wanted to help young people and adults who are victimized by family and domestic violence.

“When I was growing up, I knew she was going through domestic violence at home,” Martinez said. “The first time I heard about family violence was when they told me my best friend was killed at 14.”

She stated that she was in a “horrific place” as a teenager after the loss of her friend.

“I wish I had somebody that would have told me how I could help my friend, because I knew my friend was being abused at home,” Martinez said. “She would come to me every day and tell me what was going on at home, and I was a kid, I didn’t know what to do.”

Rodriguez, Martinez and Palomo all encouraged students to report any warning signs of abuse or violence to adults they trust. They said that even if it’s not happening to them, it may be happening to a peer.