A district court judge rulIn an effort to better connect with the community, members of the Carrizo/Comecrudo Tribe of Texas held a concert last week in Alton.

The event, “Butterflies with No Border-Protect the Sacred Benefit Concert,” was held Saturday, March 2 at the Los Portales Flea Market Ballroom. 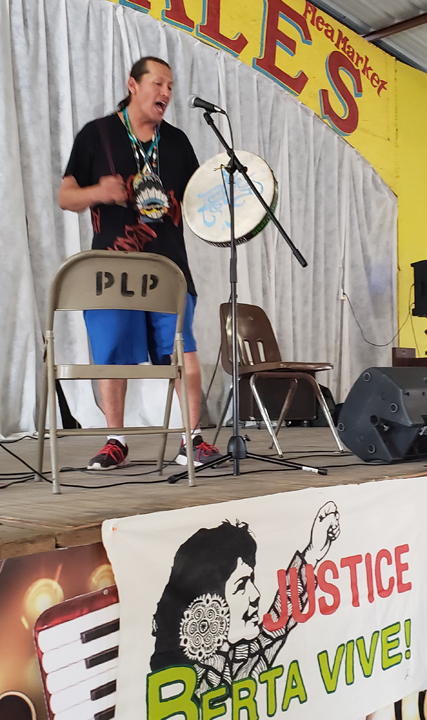 “It’s to let people know we’re here and let them join us, we’re peaceful and we like the same kind of music they like,” Chairman Juan Mancias said. “We just want to help.”

The concert featured live music from local bands, Native American tribes such as Indigenauts and even poetry readings from the group Poets Against Walls. Attendees were asked to donate money for the Tribe, who have camps set up all over the Valley, Mancias said.

“The money is going toward supplies to our camps and a few things we have planned,” Mancias said. “We want to do a canvassing of the community to get the word out on us to tell the other side of the story of what’s happening with the wall. I don’t think everyone’s getting the whole story.”

For the last few months, the Tribe have appeared in the news for participating in several local protests against the incoming border wall. Last month, the group even held a protest in San Antonio outside the office of Gideon Contracting LLC, a firm that was hired to build a portion of the border wall in the Rio Grande Valley according to a report from the San Antonio television station KSAT-TV.

Funding approved by Congress are directed to build a wall along the levee that will go through local landmarks such as the National Butterfly Center, Bentsen-Rio Grande Valley State Park and the La Lomita Chapel.

Mancias, however, said he and his people have been protesting the border wall since levee fencing started going up in the area more than a decade ago.

“Our villages go all the way across the Rio Grande River. The wall will go through burial grounds of indigenous tribes, especially as they get closer to the river,” Mancias explained. “We’ve been fighting the wall with President Bush, Bush Jr, Clinton and Obama, for years. What has changed?”

Border construction will reportedly feature a 150-foot-wide “enforcement zone” that will clear a 150 feet area from the wall. It could impact the historic Eli Jackson Cemetery near San Juan sitting near the levee. The cemetery holds the final burial grounds of several of Mancias’ ancestors he said, and the Tribe have been defending it by camping nearby to prevent border wall construction in the area.

“We’re doing our part to save the history and wildlife,” Mancias said. “The history and wildlife here have rights, but no one is voicing them and instead are giving in to an oppressed and colonized mindset of having a wall that will go through private property and sacred sites just to feel like they’re safe. It’s another form of gentrification to accommodate urban and colonized mentality.”

Mancias said with the concert, the community might be more open to listening to the Tribe. They have been working on community beautification projects such as cleaning up roads and land near the butterfly Center and the Eli Jackson Cemetery.

“We’ve had a welcome response so far, we expect some people to look down at us for what we do but we have nothing to lose in this battle,” Mancias said. “We know our identity, they can’t take that from us, but we can at least help the environment and save the wildlife that is here. We’re here to collaborate with the community, celebrate, battle the wall with them. I don’t think we’re alone in this.”