The chance to play for the Harlem Globetrotters will provide an unexpected reunion for Channel 4 Sports Anchor Alex Del Barrio.

Del Barrio was invited to suit up and play with the Harlem Globetrotters tomorrow, March 16 at the Bert Ogden Arena at 3 p.m. A graduate of Mission High School in 2001, Del Barrio said he is excited to reunite with the exhibition basketball team. 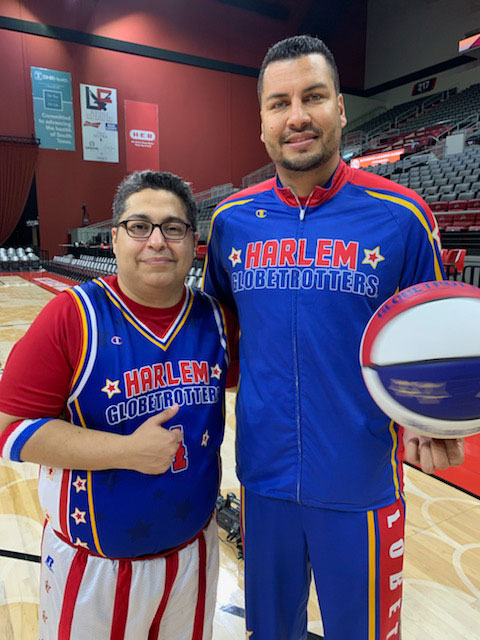 The Harlem Globetrotters combine basketball with theater and comedy, producing exhibition games over 26,000 times in 123 countries and territories.

From 2011 to 2013, Del Barrio actually toured with the Globetrotters as an announcer, travelling to 26 countries and 46 states during his time with them.

“It was one of the greatest job experiences of my life,” Del Barrio said. “I enjoyed every moment of it.”

Usually, the Globetrotters have a guest spot in the show for a local television or radio personality. They reached out to Del Barrio to participate, in part because of his history with the organization, and his current position as a sports anchor for CBS 4 (KGBT-TV).

“They just felt it was a good combination to put us together,” Del Barrio said. “When they come down, I’ll be playing with them for a few minutes as part of the show. It’ll be cool.”

Del Barrio never announced a Harlem Globetrotters game in the RGV when he was working with them.

“I got the chance to travel all over Texas and the world, but my tour group was never one that performed here,” Del Barrio said. “So what’s really cool is that while I never got to announce here for the Globetrotters, but I get to play with them for a few minutes in my home area.”

Del Barrio has spoken with and met representatives with the Globetrotters, but other than that has had no preparation for his on-court debut tomorrow afternoon.

“They had one of the players come on Monday that does all the PR stuff, and we did a little workout session where he was showing me some tricks and things like that,” Del Barrio said. “It’s really just kind of a show, so I wouldn’t say there’s any preparation other than the day of the game when they walk me through what I’m going to do.”

Del Barrio is most looking forward to seeing some of his old friends from his run as an announcer.

“The Showman for the Globetrotters now is Anthony “Ant” Atkinson, he’s someone I toured all throughout Europe with when I was with the team,” Del Barrio said. “So he’s the guy I’m pretty close to, along with several of the other players that are in this particular unit.”
“We don’t get a chance to interact very often,” Del Barrio added. “Being able to see those guys again is going to be really cool.”

The Mission native will be performing at the Bert Ogden Arena tomorrow, March 16 at 3 p.m.