A Sharyland High School senior, who is as gifted on the field as she is in the classroom according to her coach, will be playing for Trinity University.

Estefania Hinojosa signed a letter of intent at a ceremony last Thursday, March 7, to play volleyball and study engineering science. The university is a major Division III university in San Antonio and the volleyball team-The Lady Tigers compete in the Southern Collegiate Athletic Conference. Last year, they finished their conference as the regular season co-champions with a 15-1 record and an overall record 25-7, ranking #17 in the nation in the NCAA Division III poll. 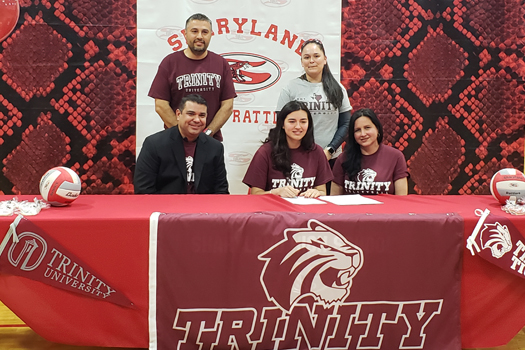 “Estefania always wanted to do more for her team during her freshman year. And that’s what she did for the next four years,” Head Volleyball Coach Raul Castillo said. “All she knows is how to put in 100 percent in everything she does. But what makes her special is that she is able to pass it on to her athletes. She’s encouraging them, she’s fearless, that is a true student athlete.”

Off the field, Hinojosa is ranked 18th in her class out of 391 students with a 3.78 GPA. On the volleyball court, her accomplishments include making state playoff through all her four years of high school, was part of the 2017 Bi-District Championship team and Area Finalist and has a career milestone of 1,000 kills.

Hinojosa said she was drawn to Trinity University after a recent visit to the university.

“I was drawn to its academic program and it was always my goal to become a college athlete,” Hinojosa said. “When I leave, I hope my teammates understand that no matter what obstacles they have, they can always overcome it.”

“All universities want a true student athlete like her, she’s the full package,” Castillo said. “Academically they don’t have to worry about her. Athletically, she will take care of business. We look forward to her completing her final year of high school and anxiously await to hear about her success at the next level.”