One by one, United States veterans silently lined up to salute U.S. Navy Veteran AN Ralph Ardith Fowler one last time.

Over 100 veterans and local residents were present at the burial of the unaccompanied veteran on Tuesday, March 12 at the Rio Grande Valley Texas State Veterans Cemetery. The Veterans Land Board invited the public to join in the service, “ensuring no veteran is ever left behind.” 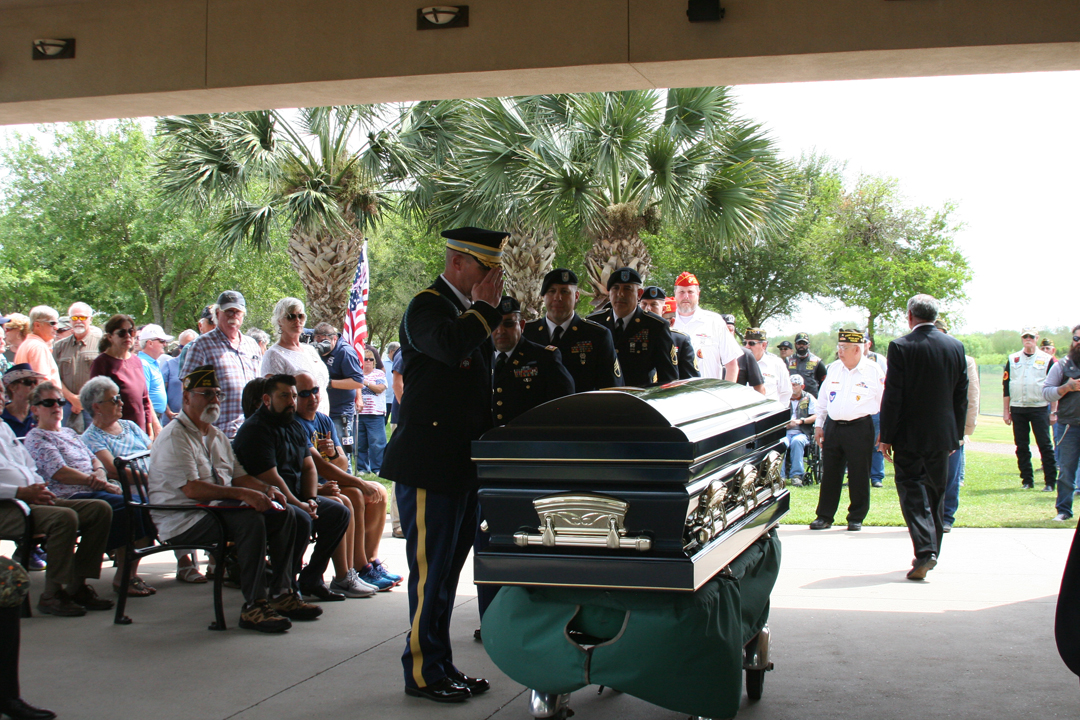 Fowler&rsquo;s family could not be found or contacted before the funeral, so people gathered to support him and his legacy as a veteran in the U.S. Among the groups present were the Hidalgo County Veterans Services and the Combat Veterans Association.

“At least he had some people that cared for him,&rdquo; Downey said. “They may not have been family, but they were there.&rdquo;

This was not the first unaccompanied veteran burial at the RGV Texas State Veterans Cemetery – on Nov. 19 Private First Class Ronald Barker was buried, the 93rd unaccompanied burial since the Veterans Land Board was started in 2015. It was implemented in order to give those without next of kin a proper military burial honors and ceremony.

Barker was homeless at the time of his death, one of 1,935 veterans in the state of Texas currently facing indigency currently according to the United States Interagency Council on Homelessness. The U.S. Department of Veteran affairs states that in 2018 overall, approximately 37,800 veterans were homeless in the country.

“Unfortunately we&rsquo;re having a lot more unaccompanied veterans, some because of their age, but a lot of it is because of the economic issues veterans have,&rdquo; Downey said. “In the past ten to 20 years, we&rsquo;ve had a lot more homeless veterans.&rdquo;

Fowler was not homeless, but next of kin could not be found following his passing. The response from the public, however, ensured that he was buried with public and military support.

“They&rsquo;ve had a huge outpouring [of support] from the civilian population and the general public,&rdquo; Downey said. “It&rsquo;s just great to see so many patriotic and supportive civilians in this day and age.&rdquo;

In the proposed 2020 budget, President Donald Trump proposed an increase of $19 billion (up to $216 billion in total, 9.5 percent more than 2019) in Veterans Affairs spending. Downey says that VA benefits and accessibility has gotten better, but still has some issues.

“The bureaucracy still exists when it comes to Veterans Affairs and getting the care that veterans have earned and deserve,&rdquo; Downey said. “A lot has been done in the last ten years to better serve the veterans, even the fact that they are listening more, I feel.&rdquo;

Veterans councils have been started in both the Harlingen and McAllen VA clinics. Downey added that despite the divisiveness in the country right now, it was good to see over 100 people come together to stand for a passed veteran.

“At the end of the day as citizens, we need to remember that we need to support the people doing the job that they signed up to do,&rdquo; Downey said. “Even though we don&rsquo;t agree with the politics, people do still stand up and say ‘I don&rsquo;t care what the politics are, I&rsquo;m just here to do my job and to support and defend the constitution in the United States.&rdquo;

Frank R. Garza, the Assistant Veteran Service Officer for the Hidalgo County Veterans Services, accepted the United States Flag in lieu of Fowler&rsquo;s next of kin. Once the flag was folded, it was presented to Garza, who then stood to salute his fallen brother.

The Hidalgo County Veterans Service office is an “advocate agency established to assist veterans, their dependents and survivors in obtaining entitled benefits from the United States Department of Veterans Affairs and the state of Texas.&rdquo;

“When it comes to unaccompanied veterans, they always have family, because the veteran community is always rallied around them,&rdquo; Downey said. “We make sure that they are never left alone.&rdquo;