It’s still considered the deadliest smuggling incident in the country. And now, Palmview High School students are turning that tragedy into a call to action.

On May 14, 2003, 19 immigrants were found dead after being left inside a hot truck trailer near Victoria. The victims were traveling with more than 70 other undocumented immigrants toward Houston from Harlingen in an unventilated trailer whose temperatures climbed to 177 degrees, killing those 19 as they succumbed to dehydration, overheating and suffocation according to a 2017 article from The Washington Post. 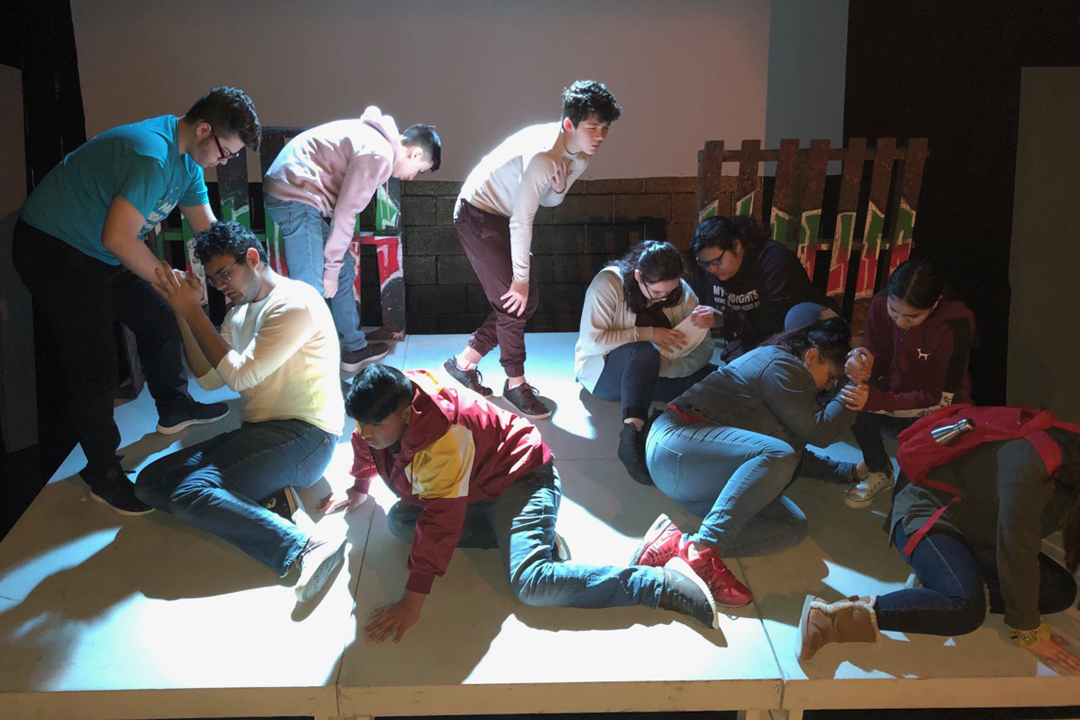 On Saturday, March 9, students from the Palmview High School Theatre Troupe memorialized those 19 victims with a performance of the play “Tracks,” a retelling of the incident.

In the nearly 40-minute-long one-act play, the story follows nearly a dozen of the victims as it explores their reasons for making the fatal trek into the country.

Senior Briena Vela plays Aurora Garcia, the mother of Joselito, a 5-year-old boy who was the first to die on this journey. He and his father Miguel died after deciding to come to America to reunite with Aurora after she successfully crossed the border prior to the start of the play.

For Vela, the message of the play is a simple one.

“People who want to come to America for a better life go through so much hardships and risk their lives to have a better one,” Vela said. “Everyone should know that the stories of immigrants crossing the border is not pleasant at all. It’s very tragic. Some lose their families, children die in the process, it’s very concerning.”

Vela, who said the play was the first time she was aware of the deadly 2003 incident, said the tragedy is still relevant nearly 16 years later.

“I’m pretty sure that there’s audience members seeing this play who can relate to this because maybe they or someone they know made a similar journey when they came to the country,” Vela said. “Everyone can relate to the loss of a child or a family member, so they can relate to this, especially with what’s going on at the border. People are being shamed for wanting to come here for a better life despite everyone talking about how Mexico is dangerous and that America is safe and a dream to be in, but Americans here aren’t accepting them. The world should be more open and welcoming of those who want to come here for a better opportunity to live.”

On Monday, the U.S. customs and Border Protection announced they apprehended 289 undocumented immigrants near Granjeno.

In January of last year, nearly 80 immigrants were found crammed in a truck near Laredo. The previous summer, At least 39 people were found packed into a sweltering tractor-trailer in a Walmart parking lot in San Antonio according to the Washington Post. Eight men died inside, and a ninth died later at the hospital while others were critically overheated.

“It’s something that’s still happening and it’s tough to swallow, but our kids understand and portrayed well what a lot of the people are struggling with to come over to the country. It’s just a sad story, “Adame said. “I have family from Mexico they came over legally, but I can’t imagine the struggles for the families who want to live on this side and have a journey similar to these characters.”

Due to similar smuggling incidents that are still going on along the border, Adame said that “Tracks” promotes empathy to a group of people who are struggling to have a better life for themselves and their family in a new country.

“It’s a story that is telling the truth, and that this is happening right under our noses. It’s not a made-up story, it’s still happening,” Adame said. “These people overall just want a better way of life. ‘Tracks’ opens up audiences eyes a little wider as they see these high school students telling a story and telling it well.”

Burt Hernandez, director of “Tracks” praised his students for bringing this story to life. After the performance, he remarked how the play is changing anti-immigration attitudes from people he knows.

“My parents, who have a big anti-immigration stance, started changing their minds after seeing this play in a performance the week before,” Hernandez recalled. “It’s a story that makes the audience see how these people are just victims trapped between two worlds. It’s changing perception of undocumented immigrants.”

The Palmview High School Theatre Troupe was performing “Tracks” during the 5A One-Act play district competition.

Though they did not advance to the bi-district competition, Hernandez said the school is looking into possibly holding a performance of the play at their campus later this season.

“‘Tracks’ says that we’re all the same, if we are all truly Christians we should care for our fellow man,” Hernandez said.” Somehow or another we should let these people in, that’s what America stands for.”