This article originally appeared in the Friday, March 15, 2019 issue of the Progress Times.

If there’s one name that is synonymous with La Joya Lady Coyotes’ softball, that name is Coach Charlie Rodriguez.

That’s because Rodriguez, or Coach Rod as he is known to his assistant coaches and players, is the only coach the Lady Coyotes have ever had. And while he is now in his 25th season at the helm of the Lady Coyotes’ squad, Coach Rod is showing no signs of even thinking about calling it quits. 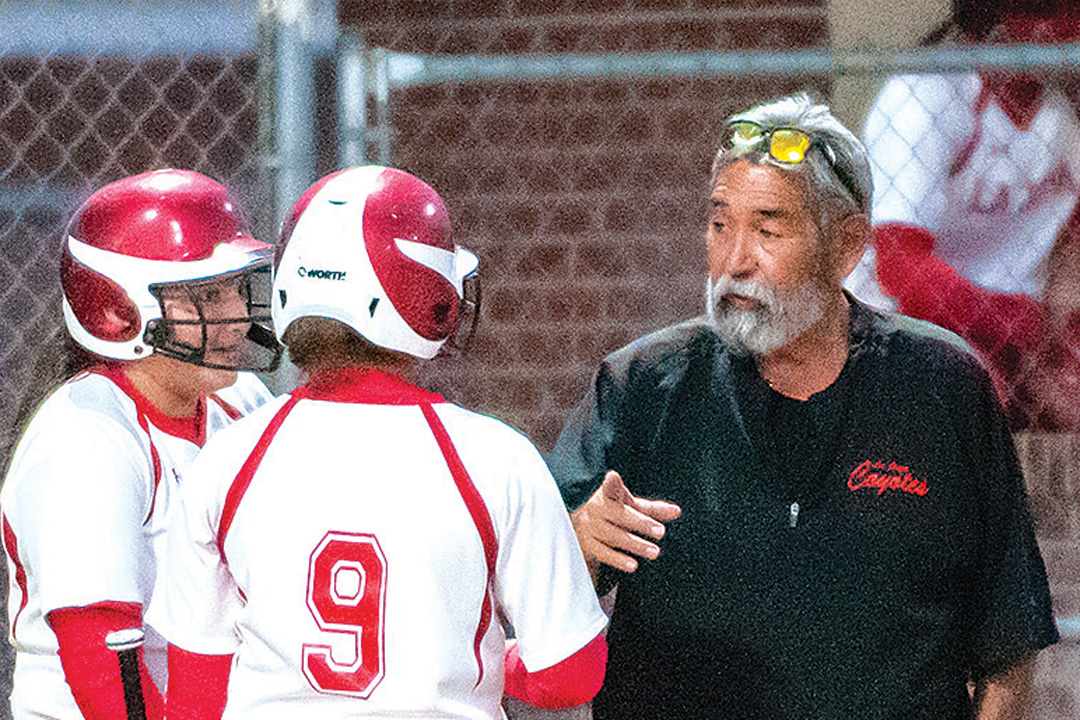 A 1978 graduate of Mission High School, Coach Rod played baseball for the Eagles under Coach Dave Richey. He credits Richey for showing him how to respect the game and for teaching him the details of the game. In addition, it was during those high school years that he developed a love for the game.

After graduating from Pan American University in 1985, Coach Rod took a teaching position at Nellie Schunior Junior High School in La Joya. That was where he began his coaching career.

“I was coaching all the middle school sports as we all do when we first come out,” Rodriguez said. “And then a position opened up on the junior varsity baseball team so I took that. I also took a position with the freshman football team.”

After three or four years of coaching the JV baseball team under coaches Leo Garza and Bobby Guerra, Rodriguez was presented with the opportunity to start the softball program at La Joya High.

“In 1994 a position opened up for a softball coach to start the program,” Rodriguez said. “I was fortunate enough that my athletic director, Coach Mario Pena, selected me to be the one to start the program. “
“While I did take the job, it wasn’t an easy decision for me to make,” added Rodriguez. “I actually had to think about it for about a month before I decided to take the job. The deciding factor for me was the fact that by taking the job, I might someday get to coach my two daughters, who were four and six or six and eight at the time. And guess what, it happened.”

Rodriguez not only got the opportunity to coach his two daughters, Melissa and Monica, but there were two years in which they were both on the Lady Coyotes team at the same time.

At the time that Rodriguez began the Lady Coyotes softball program, other Valley schools were doing the same.

“I think we were in the second stage of schools starting softball programs in the Valley,” Rodriguez said. “I think that Harlingen, Brownsville and Sharyland high schools began their programs the year before we started ours here at La Joya. However, Mission High School and we started at the same time.”

With softball being a new sport at the high school level, you might think that girls would be hesitant to go out for the team. However as Rodriguez explains, that was not at all the case at La Joya.

“Even though it was something new, players came out for the team,” Rodriguez said. “We started working with them and it didn’t take us long to figure out the girls are coachable. They want to learn and at the time the girls didn’t have the little league background like the boys did. And since they hadn’t had the opportunity of developing bad habits, we really enjoyed bringing them up to the level that we wanted them to be at.”

When asked how long it took him to turn the Lady Coyotes into a winning team, Rodriguez said, “While some might think it was a little selfish for us to do this, but the first year we only played underclassmen as a way of looking to the future. We were looking out for the program and by doing so we were able to win a title and a playoff game in just our second year. I still remember that we beat San Benito in the first round and then we lost to either Corpus Christi Carroll or King in the second round.”

With coaching being a, “What have you done for me lately?” profession, it is rare to have a coach remain at the same position for ten years, much less 25. That is why Rodriguez never expected to still be coaching the Lady Coyotes at this point in time.

“I would not have suspected 25 years ago that I’d still be the head softball coach at La Joya,” Rodriguez said. “But you know what? I still get up every morning and I feel blessed to have had the opportunity of working with such great people, from the athletic department all the way down. They’ve all been very supportive. But most of all I am thankful for the opportunity I’ve had to work with a lot of great assistant coaches over the years.”

When asked if there is any particular game or team that he remembers the most, Rodriguez said, “We’ve had quite a few good teams but in 2007 we put together a 24 game winning streak. We also went four rounds deep into the playoffs.”

As for what it has meant to him to be the Lady Coyotes’ softball team’s head coach for the past 25 years, Rodriguez said, “For one I am thankful to the administration that has allowed me to reach this milestone. I’ve always said that I’m the luckiest man in the world. Who else got to drive their kids to school and share with them anything they wanted to share with them like I did for six years with my two daughters? We’d practice, go to school, practice, go home and share things having nothing to do with softball.”

While Rodriguez has had many assistant coaches over the years, there is one in particular that has been with him over the majority of his 25 years.

“I have an assistant coach that was on my varsity squad as a player for four years and has now coached with me for 16 years,” Rodriguez said. “So she’s on her 21st year with me out of the 25. Her name is Brenda Garcia.”
One of the things that Rodriguez is most proud of is the fact that he has had seven former players return to La Joya High School as coaches.

“They’ve been players and now they understand the coaching aspect of the game,” Rodriguez shared. “That is something that we are proud of as an organization.”

As for whether or not he has any plans to retire anytime soon, Rodriguez said, “It’s been a great ride, but it isn’t over. Not by a long shot.”