The memorial service was closed with several active K9s and their handlers walking up to Cezar’s ashes, eager to salute him for his service to the city one last time.

Police officers, family, friends and canines from Mission and all over the RGV gathered at city hall on Wednesday morning to honor Cezar, a retired K9 officer who spent eight years with the Mission Police Department. This is the first time the city has organized a memorial service for a K9 officer. 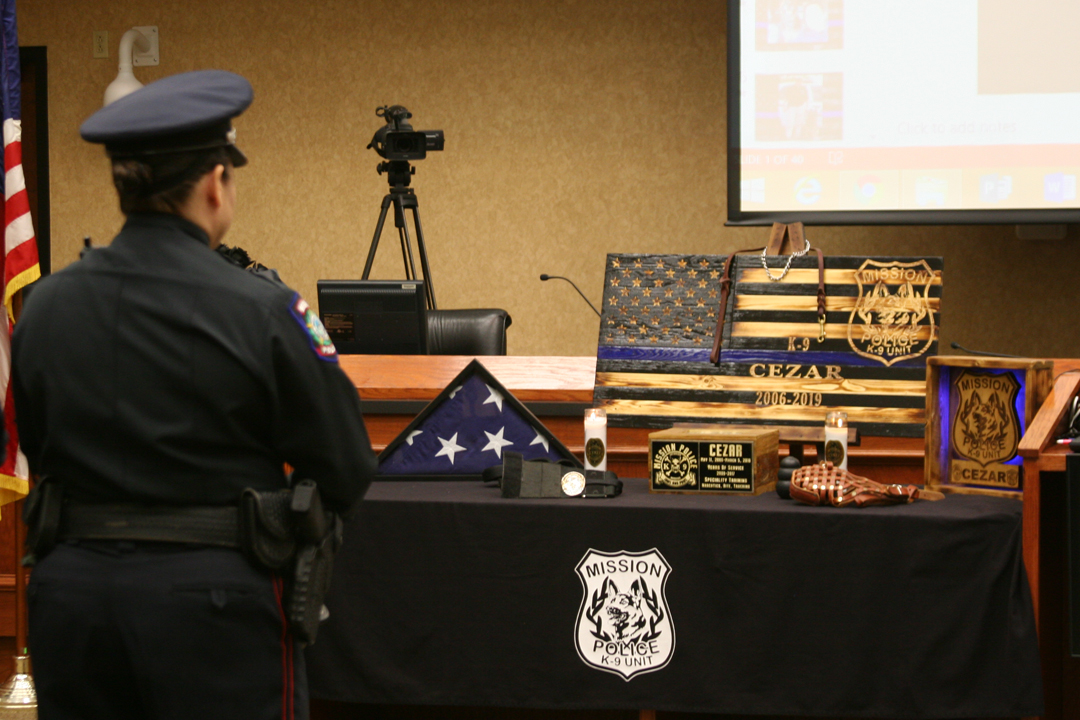 Cezar passed away March 5 due to ongoing health issues.

He retired from service in 2017, and was subsequently adopted by his handler Officer Alexandria Leal.

Cezar, a long-coat German Shepherd, was described as an aggressive dog when he came to the Mission PD and was about to be put down. He had served with three other officers before Leal, who worked with him for six years before his retirement.

“Cezar was a special dog, he was aggressive,” Lieutenant Javier Ramon, Canine Supervisor for Mission PD, said. “Leal, when she came on to the unit, was just like Cezar – two peas in a pod.”

Ramon said Cezar and Leal were both “hard-headed” when they started training together.

“As time and training progressed, you could see both of them make that transformation,” Ramon said. “You could see Cezar’s temperament come down a lot. It was a match made in heaven.”

The memorial service included the presentation of colors, a presentation of Cezar’s ashes, an invocation and benediction by Father Roy Snipes and a final salute from K9 officers from Mission, the Hidalgo County Sheriff’s Department and the University of Texas Rio Grande Valley.

The Mission PD Canine Unit has been in existence since the late 1980’s. It was started, originally, in order to help with several burglaries that were taking place in a few Winter Texan parks in the city.

“We had five to ten burglaries at the trailer parks every other day,” Ramon said. “So they figured that one of the ways to curtail that is through a K9 program.”

When it first started, costs for the canine unit were raised entirely through fundraising efforts. Not long after that, it was adopted into the budget.

“They purchased three dogs out of Germany, true German Shepherds,” Ramon said. “These dogs were mainly for tracking, but they were also good at smelling narcotics. They were dual-purpose, so they were called patrol dogs.”

Currently, there are four service canines currently with Mission – three trained to smell narcotics and one trained to smell explosives. The canines are busy year-round, not only in their active duties and consistent training, but their public duties as well.

Mission PD takes the canines to different schools in the area annually during Red Ribbon Week in order to educate young people about their jobs in the department and how they track illegal substances. Ramon has found that public perception of the PD has improved since the introduction of the K9 unit decades ago.

Cezar was a narcotics canine who had several successful busts in his career.

“Sometimes it hurts just as bad when we lose one of our pets,” Police Chief Robert Dominguez said. “I think all of us can reflect back on our life on that special dog, that special cat in our life.”

Dominguez also added that K9 officers and their handlers form special bonds that are as strong as those formed between officers.

“It’s impressive to see the relationship between an individual human being and that animal,” Dominguez said. “It’s beautiful to see that type of response, that type of unity. That’s why it hurts to have somebody pass away.”

Leal, Cezar’s handler and owner in retirement, spoke last. She read a note she wrote to Cezar after he was put down that described how he impacted her life, and talked about his stubbornness.

She recalled her first day with Cezar, saying he was so insistent he would actually move the K9 unit cage in the police cars. Determined that she would not be bitten, Leal approached the unit containing Cezar cautiously, throwing hot dog weenies into the cage to try and get him to calm down as he pushed the cage forward.

“From the moment that I put him in my unit and took him home… He saved me as much as I saved him,” Leal said. “As a veteran, as a police officer, this is probably the best assignment I could have ever been given.”