Last week Rangel returned to the RGVLS, the Valley’s largest and longest-running livestock show, with what she believed to be another grand champion quality steer. Only this time it was a 1,399 lb. Charolais steer named Buddy. Rangel was out to win back-to-back grand championships in the steer division, a feat which few, if any, have ever accomplished. 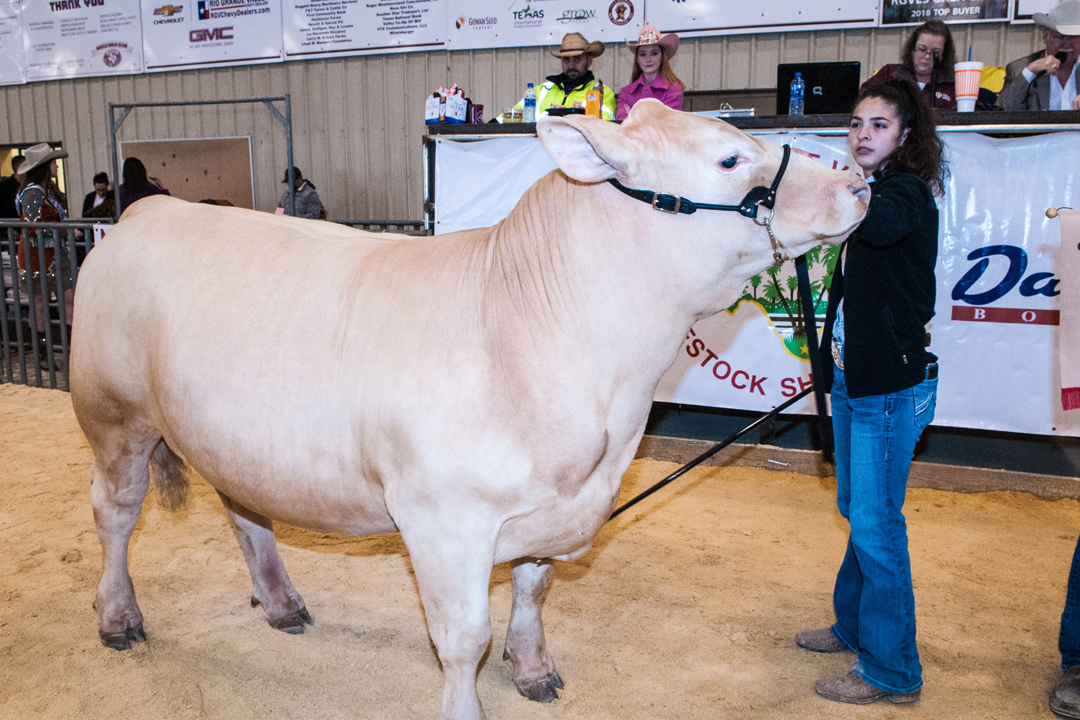 All went well for Rangel in the preliminary rounds as Buddy won his weight class and his breed championship; both of which are worthy accomplishments in-and-of themselves. However, Rangel knew that there was still a major hurdle ahead as she would soon be leading Buddy into the show ring to go up against the other breed champions in the grand champion drive.

While Rangel, an experienced and award winning showman who has been showing livestock since she was in third grade, showed Buddy off to the best of her ability, the judge went with an AOB steer belonging to Logan Thomas of the Willacy County 4-H as the grand champion. While Buddy was named reserve grand champion, Rangel couldn’t help but feel a somewhat disappointed about falling just one spot short of taking the grand championship for the second year in a row.

“I am a little bit disappointed, but it was tough competition and Thomas had a very nice steer,” Rangel said. “It all comes down to the judge’s decision and for whatever reason, or reasons, he decided to go with his steer over mine as grand champion.”

While most steer exhibitors buy their steers as calves from professional ranchers, the Rangels raise their own show steers at their ranch northeast of Mission; this includes AMC and Buddy.

When asked when it was that she knew that Buddy would be a champion quality steer, Rangel said, “My Dad knew he was a good steer when he was born, but later on he started getting better so that was when we put him in the barn and I started working with him as a show steer.”

With the grand champion steer having sold for $22,000 at Saturday’s Sale of Champions, while Buddy sold for $11,000, the judges’ decision to go with Thomas’ steer ended up costing Rangel $11,000. According to Rangel however, it was not about the money.

“My disappointment is not about the money,” Rangel said. “It’s more about the fact that I thought I had my second grand championship in two years. At the end of the day however, it is the judge’s decision that counts and not mine.”

While most exhibitors would be thrilled to win a reserve grand championship, Rangel has set the bar extremely high and she expects to win each and every time she walks into the show ring. While she did fall just a little bit short of reaching that bar this year, she still enjoys showing livestock.

“You meet new people and you raise money for college when you show livestock,” Rangel said. “You also get the opportunity to socialize with your fellow exhibitors. Also, I believe that showing livestock makes you a better person.”

While Vargas is only 14-years old, he is a four-year veteran when it comes to showing lambs. As a matter of fact, raising livestock runs in his family with his uncle, Marcos Villarreal, being an Ag teacher at Mission High School. Vargas even had the grand champion winning lamb at the San Antonio Livestock Show in 2015.

Vargas’ lamb, which he named Powerhouse, sold at auction Saturday for $1,800. He plans on using that money to help finance his livestock project next year.