An elected official, a nun and a teacher walk into a bar and end up receiving awards recognizing them for their achievements in the Rio Grande Valley.

As part of social work month, the local branch of the National Association of Social Workers recognized six individuals Wednesday. Among those recognized was Sister Norma Pimentel, executive director of the Catholic Charities of the Rio Grande Valley, who earned the distinction of public citizen of the year. 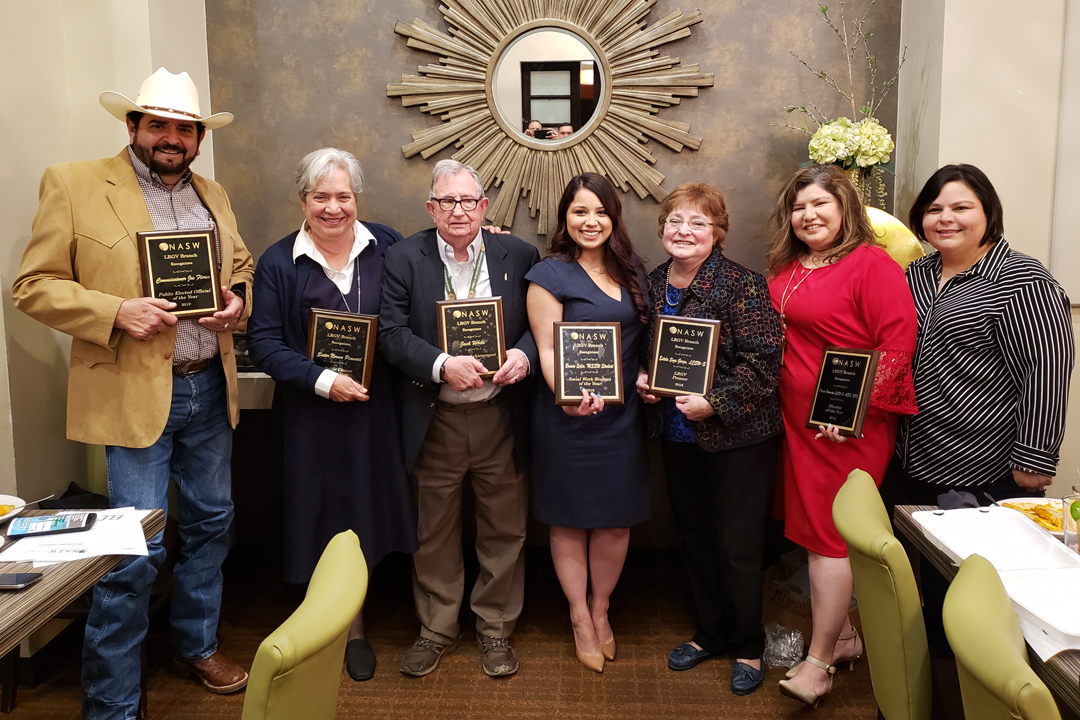 Joe Flores, Precinct 3 commissioner, was recognized as elected official of the year and Jack White-adjunct professor at the University of Texas-Rio Grande Valley and executive director of the Brownsville organization Good Neighbor Settlement House-received the lifetime achievement award.

“This is a group who does a lot for their community, Celina Garza, president of the local NASW organization said. “All the contributions made by the different people here have impacted the community in different ways.”

Joe Flores, who has been serving as a county commissioner since he was first elected into office in 2000, was recognized for what Garza described was a “selfless desire to be a servant to the community.”

“He’s been committed to always step up to help families in need,” Garza said. “I first worked with him in 2003 when I asked him to help us improve the living conditions of an elderly couple living in a shack. He ended up going above and beyond and built them a new house fully paid for and even installed a septic tank for them and six other homes in the area.”

After receiving the award, Flores said his selflessness comes from a sense to duty to his community.

“We help people, it’s just what we do,” Flores said. “I’m lucky to be elected to continue to do this.”

White, who has been involved in social work as a grant writer, director and in other fields, has served his community for over five decades Garza said. In those years, White has helped raise $1 billion in funds across multiple organizations across the state. Aside from his duties at the Good Neighbor Settlement House-a non-profit that assists underprivileged families in Brownsville-, White is a social work professor at UTRGV.

“It’s a way to get out of the house,” White jokingly said of his many duties. “I’m 80 years old but I don’t see a reason to stop being a volunteer in the community.”

Pimentel, whose organization runs the Humanitarian Respite Center in McAllen, was praised by Garza for exemplifying the values of traditions of a professional social worker.

“Since 2014, before the immigration issue, you stepped up to provide services to thousands of families coming here,” Garza told Pimentel. “We appreciate you and recognize the work you do.”

In her speech, Pimentel addressed the overcrowding at the respite center, which she said was due to U.S Customs and Border Protection releasing hundreds of immigrant families due to their local facility being overcrowded.

“These couple of days we have had a high number of people being released by border patrol,” Pimentel said. “Just to see the families and the conditions, it makes me go home and wonder why people have to suffer. Why do these people face these conditions and why we can’t just be brothers and sisters to one another and reach out to lend a helping hand to others?”

Pimentel praised the NASW organization for helping social workers, a line of work she said is modeled after how Jesus helped his fellow man.

“A social worker is committed and dedicated to the community and in uplifting the dignity of a person,” Pimentel explained. “These people are not scene on the frontlines, but they’re there, behind the scenes, making sure our community is being taken care of.”