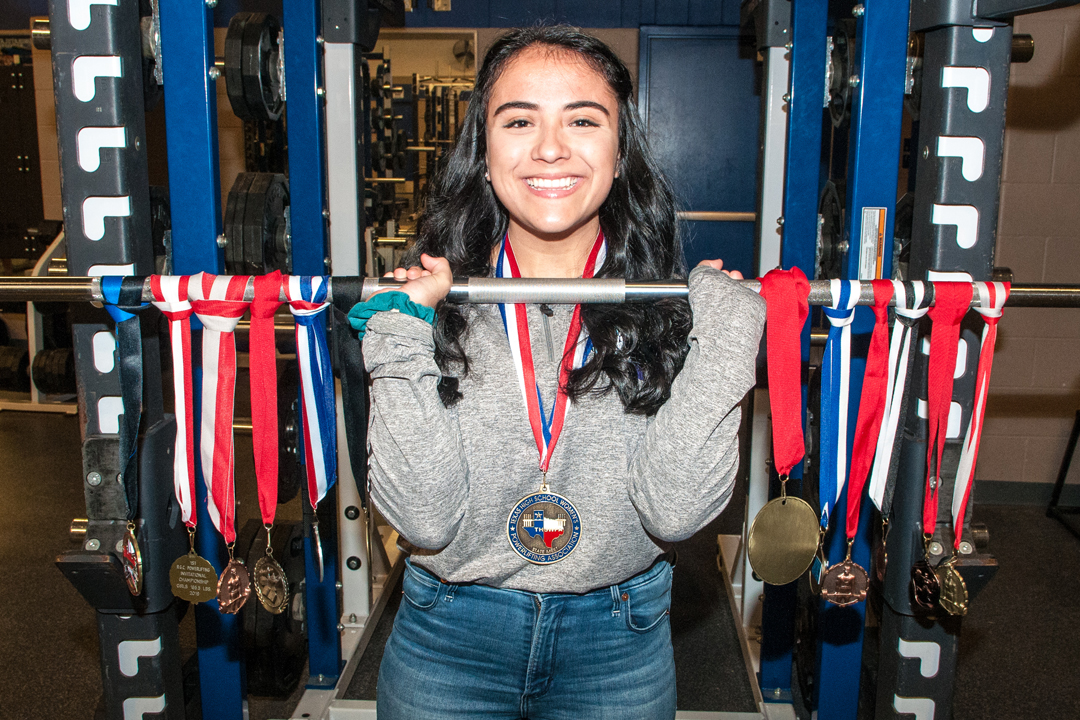 Javi Cavazos is in his first year as the head coach of the Mission Veterans powerlifting teams. He made the trip to Waco last week with Flores who was the Patriots’ only state qualifier this year.

“It was my first trip ever to state,” Cavazos said. “It was Brianna’s second so she knew more about what was going to happen than I did. As a result, she kind of guided me at the beginning.”

“On the way up to Waco we did our homework and we studied the competitors,” Cavazos added. “We knew the two main competitors that she would be going up against so we paid attention to them to see what they were doing and to see where we would have to throw on some extra pounds here or there to try to beat them. Brianna was positive, she had a game plan and she stuck to it.”

While some might expect powerlifters to be so muscular that they look like bodybuilders that is not the case, at least not when it comes to the girls. So what is it that makes Flores on of the best girls powerlifters in the state? Cavazos explained when he said, “It’s about proper form and technique and Brianna is a master at that. My background comes from cross-fit so I have a lot of cross-fit/powerlifting mixture but she’s 100% powerlifting. So she was able to talk to me and we talked about form and technique and she’s the perfect model for technique.”

Flores, who is now a senior, got into powerlifting as a freshman. She decided to give it a try after her older brother, Adrian, talked her into it.

“My brother got into powerlifting because he was a football player and football players had to do either track or powerlifting,” Flores said. “I’d watch him and I’d be so grossed out. I told myself that I’d never want to compete because the girls would probably get big but he kept telling me to give it a try. So I tried it my freshman year and I ended up loving it. Instead of getting bigger, I’ve lost 20 lbs. and I am now on a much healthier diet as a result of powerlifting.”

Having underperformed at the state meet last year, Flores was out for redemption this year.

“Last year I was supposed to place fifth but I placed either seventh or eighth,” Flores said. “It was heartbreaking because I really wanted to do something special for my school but I came up short so I went home crying.”

The first of the three lifts powerlifters have to attempt at meets is the squat. That is then followed by the bench press and the dead lift. Flores exerted herself so much in the squat at the state meet, that she experienced something she had never experienced before.

“I didn’t get my first lift of 385 lbs. at the state meet because I didn’t go low enough,” Flores said. “I jumped up to 405 lbs. for my second lift and went low enough to get it. I did struggle however, so much so that I popped some blood vessels on my neck and my face. I was actually hoping something like that would happen because everybody talks about how they experience powerlifting in different ways like passing gas or popping blood vessels which leaves little red marks on their faces. The fact that I finally got to experience that during my last state meet made me very happy.”

While Flores’ total of 1,010 lbs. for her three lifts was 10 lbs. under the state record for the 148 lb. weight class, it was 65 lbs. over the second place lifter’s total of 945 lbs. With the two girls that were supposed to give her the most competition having either scratched or bombed out, Flores knew that all she had to do to take the gold medal was to avoid bombing out.

“On my first dead lift I realized that the girls that were supposed to get second or third were both out so I started to tear up,” Flores said. “My Mom, who was sitting right in front of me, was getting mad because she wanted to know why I was crying. She started texting me and my coach but I ignored her because I was just happy and I realized that all the work I had put in over the past four years was about to pay off.”