When former Mr. Mission Don Reinhardt died March 7, Mission lost “a giant of a man,” according to his neighbors at Aladdin Villas. Don dedicated his life to the service of others, starting to live by that motto while a member of the Boy Scouts while growing up in Kansas.

Don did nothing without doing it well and he stayed in scouting long enough to earn his Eagle Scout badge. In addition to scouting, he loved music and was a member of the band and choir of his high school growing up. Don was also an accomplished gymnast. 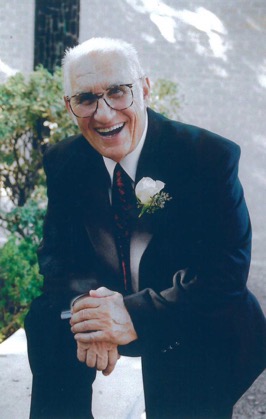 Immediately after finishing high school in 1944 he joined the Navy and served as an aerial gunner on a torpedo bomber during World War II. He was honorably discharged in 1946 after the war ended and returned home to attend Kansas State University. He earned a degree in biological science and took pre-dental requirements. He graduated from dental school in Kansas City, Missouri in 1954.

He married his college sweetheart Bonna Maxfield, and set up a dental practice in Great Bend, Kansas. He and Bonna had five children, who remember him as a loving father, who was a bit of prankster but who was dedicated to serving others.

According to his daughter Cindy, he was a Scout master for 15 years and received the Silver Beaver Award, the highest honor given to a scout master. She said he regularly took the family to Philmont, a scout camp in New Mexico as a part of his travels with the boys.

Through the years Don was a Free Mason and a Shriner. He was very active with the Lions Club in Great Bend.
Cindy also remembers Halloween at their house. Their neighbor was a baker, who gave out donuts for treats. Her father was a dentist so he gave out new toothbrushes and toothpaste to off-set all the treats the children received at other houses.

After his retirement Don and Bonna moved to Enchanted Valley west of Mission. Don immediately became involved in the First United Methodist Church of Mission, singing in the choir and later becoming active in the church council. At the same time, he became an active member of the Mission Lions Club. About six months after his retirement Bonna had a severe stroke and Don spend the next seven years caring for her. When Bonna died in 2004 they had been married 55 years.

In 2005 he married Helen Bentsen, who had also been married 55 years and widowed two days before Don was. The couple knew each other from church where they both were members of the choir and involved in other church activities.

They enjoyed almost 14 years together traveling the world, and participating in activities in Aladdin Villas where they lived. Stepson Brad Bentsen described Don by saying he had never met a man so committed to Christ-like behavior, saying he lived by the motto, “We Serve” of the Lions Club and the Boy Scouts.

Don was a charter member of the Mission Historical Museum. He served as a Gideon for 10 years and was a Shriner, a lifelong Elks Lodge member and member of the VFW. He kept up his lifelong love of singing by participating in Senior Ambassadors. Director Virgel Kroeker said Don was active in the group 20 years. He was also a part of The Men of A-Chord, a barbershop group where he sang tenor. At church Don became known as the coffee man because he set up the drink station for many activities including the weekly ESL classes at the church.

His participation in Lions Club remained strong and he had a 65-year perfect attendance record for his 70 years of participation. Lions Tim Milam and Ron D’Andrea said Don served as Lion Tamer and set up the meeting, was a past president, and received the Melvin Jones Fellowship, which is the highest award for exemplary behavior for Lions.

The fifth Wednesday is bowling day for Mission Lions and Don participated until he was in his 90’s. He also participated in construction of ramps for newly handicapped members of the community.

The many things Don did for the Mission community through the years was appreciated, and in 2016 he was named Mr. Mission for his service throughout the years. He was indeed ‘a giant of a man’ who made a difference for many people. His presence and his great big smile will be missed in many places.