Two of the best soccer teams in the Rio Grande Valley call Juarez-Lincoln High School home. With a combined 27-1 District 30-6A record, the Huskies boys and the Lady Huskies came as close to achieving perfection without actually achieving it as you can get. And with the UIL’s (University Interscholastic League’s) state playoffs kicking off this weekend, there’s no telling how far these two teams will go.

While the Huskies are in the habit of making deep runs into the playoffs, including one trip into the state final four, the Lady Huskies will be looking to make it past the bi-district round for the first time. Will this year mark the Huskies’ return to the state tournament and the Lady Huskies’ first playoff win? Only time will tell but based on their success so far this season, both of these are very achievable goals. 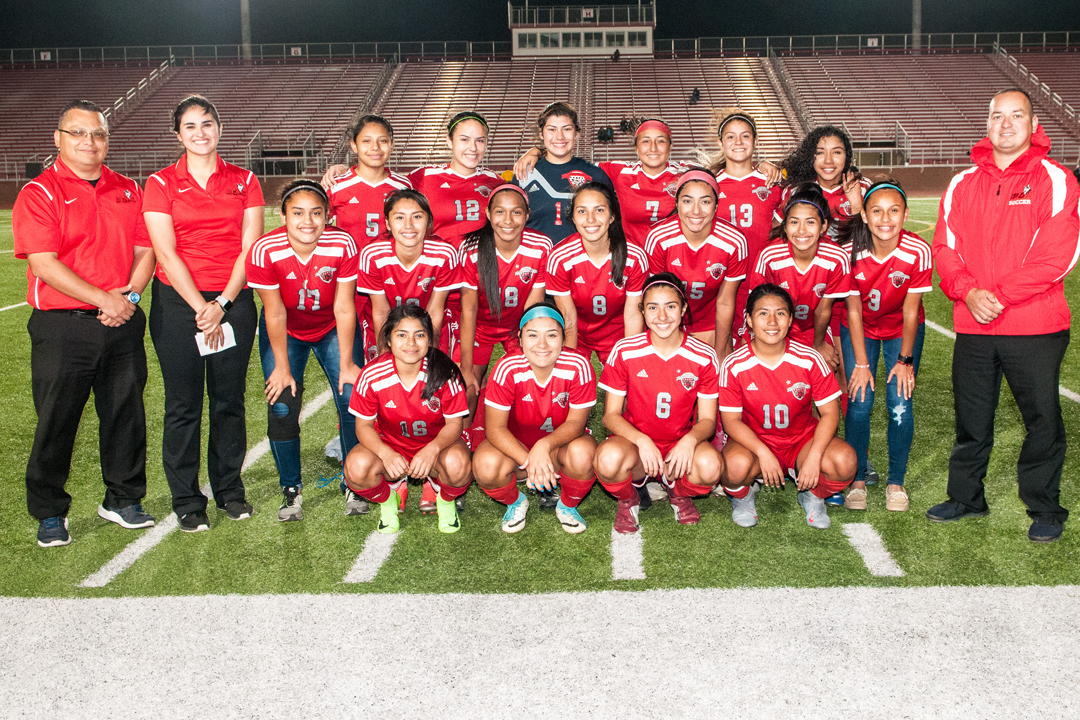 Let’s take a look back at both teams’ 2018-2019 regular seasons and a look forward at their upcoming bi-district playoff games.

Lady Huskies
Led by head coach Rick Garza, the Lady Huskies had the most successful season in team history. Not only did they fall just one win short of putting together a perfect District 30-6A season, but that one loss also cost them a perfect overall record.

“Our overall record right now, including district and non-district play, is 34 wins and one loss,” Garza said. “We were 21-0 in non-district play and 13-1 in district play. Our one loss was to McAllen High who we ended up splitting with. In points, we fell one point short of the Lady Bulldogs. I believe we had 35 points while they had 36.”

That one point difference was a result of a game against PSJA North in which the Lady Huskies needed penalty kicks to emerge victorious. That resulted in the Lady Huskies earning only two points for the win instead of three. Had they won that game outright, the Lady Huskies and the Lady Bulldogs would’ve been co-district champions.

Last year the Lady Huskies placed fourth in the district. This year they fell one point short of a district championship. So what accounts for this vast improvement? According to Garza, it was his team’s turnaround against three of the district’s top teams.

“Being able to compete against a team like McAllen High, a team that has had a very successful program for many, many, many years with Coach Arney, and not only that, but being able to earn a win against a program like that, speaks volumes about the quality of our athletes,” Garza said. “We clearly understood what was at stake in the rematch against McAllen High, and at the same time we knew that we had an opportunity to test ourselves against a state finalist type of team, and the girls were able to prove that anything is possible with teamwork.”

The Lady Huskies will be facing off against Del Rio tonight at 6 in the bi-district round of the playoffs. The game is scheduled to be played at Shirley Field in Laredo.

Huskies
Coach Victor Ramos’ Huskies are no stranger to the playoffs. As a matter of fact, they have qualified for the playoffs in each of the 11 seasons since the opening of Juarez-Lincoln High School. More recently, the 2018-2019 season marks the third in a row that the Huskies have earned a district championship. In total, the Huskies have won seven district championships, have reached the regional semifinal (Sweet 16) five times, the regional final three times and the state tournament (final four) once.

This year the Huskies not only finished District 30-6A play with a perfect 14-0 record, but they completely dominated their district opponents both offensively and defensively.

“We finished the season with the best offense and the best defense in the district,” Ramos said. “We scored 63 goals and they only scored seven goals against us. We have a very balanced team. We have a forward named Sergio Escareno who was the district’s leading scorer with 25 goals this year. And while we have three goalkeepers, senior Christopher Banda is the starter. He’s been there since he was a sophomore and he was our goalkeeper when we advanced to the state tournament in 2017.”

“Every year we know that we’re going to work towards an ultimate goal of a state championship,” Ramos said. “But we have other goals as well and we have to take them step-by-step. Our first goal is to make the playoffs. Second is to win district. Third is to continue playing well in the playoffs because if you play one bad game and that’s it. And finally, our ultimate goal is to be able to go to state and to win it. Hopefully this will be the year.”

The Huskies will begin what they hope to be their best playoff run ever by hosting Laredo United South tonight at 7:30 in the bi-district round of the playoffs. This game is scheduled to be played at La Joya ISD Stadium.