The Diamondbacks opened the scoring in the bottom of the third when shortstop Jacob Rosales drove in one run with a single and right fielder Johnny Lugo drove in two with a triple. The Rattlers tied the score in the top of the fourth with RBIs by shortstop Andy Lozano and center fielder Saul Soto. 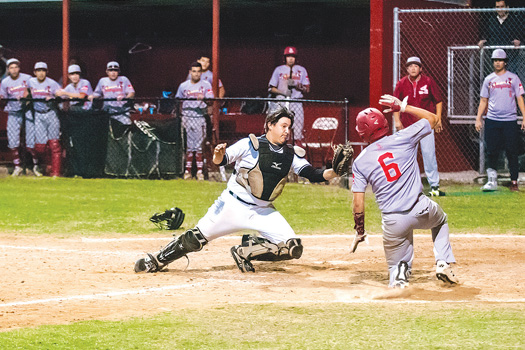 Sharyland Pioneer regained the lead in the bottom of the fourth when first baseman Ray Hernandez drove in a run with a double making the score 4-3 in favor of the Diamondbacks. The Rattlers tied the score again in the top of the fifth when catcher Abraham Alvarez scored on an errant throw.

The score remained tied at four each until the top of the ninth when Sharyland scored two runs on a two out single down the left field line by left fielder Diego Pena.

However, in the bottom of the ninth, the Diamondbacks’ Angel Nunez was hit by a pitch with the bases loaded to drive in one run, third baseman Evan Maldonado scored the tying run on an error at home and second baseman Pedro Tovias drove in the winning run with a sharply hit grounder up the middle.

Tovias clutch hit to win the game was especially gratifying for him after a rough game he had last week.

“Last week I didn’t have my best game defensively,” Tovias shared immediately after Tuesday night’s game. “I made a bunch of errors but that’s in the past now.”

As for his game winning hit, the Diamondback senior second baseman said, “I knew that we had less than two outs so I went up to the plate just wanting to put the ball in play. I wanted to see if I could make them commit another error; either that or I wanted to hit a deep fly ball that would score the runner from third. When I got two strikes I swung at the curve ball away and I was able to drive it up the middle. Once it got past the diving second baseman, I knew it was a hit.”

Former Mission Veterans head baseball coach, but now in his second year in the same position with the Diamondbacks, Casey Smith shared his thoughts on his team’s come-from-behind victory when he said, “Our kids did a very good job of continuing to fight despite the fact that we had some things happen that didn’t go our way. Our kids kept battling and I’m really, really proud of the effort they put in.”

Prior to his becoming a head coach, Smith was an assistant under Sharyland Rattlers’ head baseball coach Bart Bickerton. As a result, he had mixed feelings about going up against Bickerton and his Rattlers Tuesday night.

“I think everybody else probably looks forward to our games against the Rattlers, but I don’t really like playing Bart because Bart and I are pretty good friends and we’ve got a lot of respect for each other,” Smith said. “So it’s one of those cases where we have to play against each other because we’re in the same district and I do know that the kids were fired up. But anytime you go up against a team coached by Coach Bickerton you know that you’re going to be in for a frickin’ dog fight every time.”

Smith pulled his starting pitcher, Angel Nunez, out of the game in the top of the fourth inning after giving up only two runs. As he explained, doing so was not a result of a lack of faith in Nunez, it was much more a matter of his faith in his pitching staff as a whole.

“We’ve got four guys that have been throwing well for us so we’re not really afraid to use any of them,” Smith said. “The idea was to see how far Angel could get us, and then as soon as he got into trouble, we’d bring in one of our other guys. As it turns out, we went with Evan Maldonado tonight.”

While the loss was a tough one for the Rattlers, Bickerton took the loss in stride.

“We really hit the ball well, we just didn’t hit the ball when we needed to,” Bickerton said. “I don’t know how many times we left the bases loaded or how many times we left men on second and third but we just didn’t do the little things right. Twice we bunted the ball straight at them and those were both killers. But you’ve got to give them credit. Their hits were all monster hits and ours were the opposite.”

“We’ve just got to come back on Friday,” Bickerton added. “All we can do is to take it for what it is. We’ve still got a long way to go in district and we’ve got to try and split with the best teams in the district, like Pioneer and Rio Grande.”