Kids in the Sharyland area will be getting an updated gym that includes classrooms after the expansion project is complete.

Last Friday morning, the city of Mission held a groundbreaking ceremony for the expansion of the Boys & Girls Club gym at Bannworth Park. The project was approved by city council in order to better serve the growing population of children participating at the Mission Boys & Girls Club. 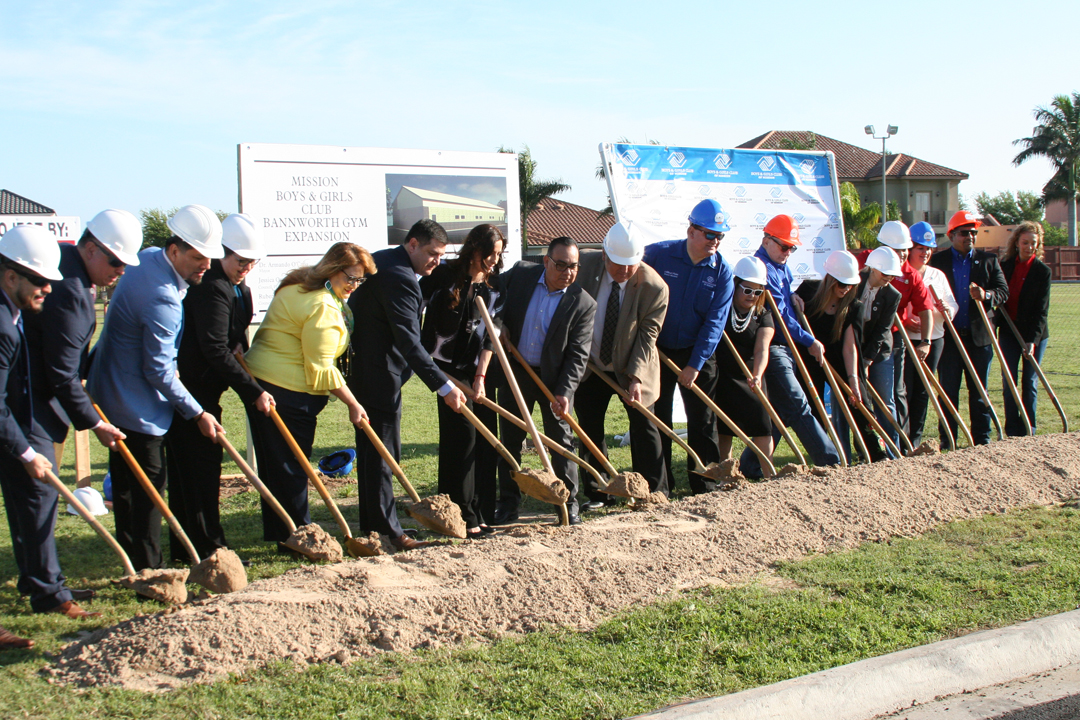 “We’re extremely excited with everything going on,” Juan Arevalo, the Boys & Girls Club of Mission Director, said. “We have four gyms, we’re servicing four different after-school sites, we have the educational enrichment programs.”

The expansion will include four classrooms, an office, a computer lab for students who wish to utilize the after-school programs offered and restrooms. Currently, the after school program is available at the Mission Boys & Girls Club location off of Conway, and the Bannworth Gym only houses indoor courts.

The Boys & Girls Club of Mission serves about 6,000 children. This expansion will mean the city will have two full-service units for the club.

“With this expansion, we’re hoping to increase with another 2,000 kids,” Arevalo said. “There’s just a lot of excitement within the schools to be able to provide an after-school facility that will tutor and mentor their kids so they can become productive citizens in our community.”

Mayor Armando O’caña said the project came to fruition after a fifth-grade student in Sharyland, Corey, asked him why students living in the SISD had to be bussed to the Boys & Girls Club across town to the Conway location for after-school classroom services.

“He triggered the light bulb,” O’caña said. “And from there, the rest is history.”

O’caña added that children can serve the community well if people listen to them.

“Listening to children is the future of Mission,” O’caña said, adding that he started with the Boys & Girls Club in 1973. “Together with the school districts, we can jointly educate our children.”

Fay Beard, representing the Boys & Girls Club of America Southwest Region Board, also attended the groundbreaking. According to her, there has been an exponential surge in Mission students from all districts attending the local branch.

“You’ve really taken on the challenge, and I’m pleased to see they’re expanding the services to kids,” Beard said. “When you look at kids every day, they need a safe place to go after school.”

She said that the Boys & Girls Club of America has three priority areas for kids: academic success, good character/citizenship and healthy lifestyles.

“We’re doing after-school homework help, and we’re providing a meal for many kids,” Beard said. “We’re providing those services to give them an opportunity to grow.”

Mission City Manager Randy Perez, a product of the Mission Boys & Girls Club, said this expansion will be good for the community.

“This project is part of the continuing progress that the city of Mission is currently experiencing,” Perez said. “It’s truly an indication that Mission is growing.”

Carolyn Mendiola, the Assistant Superintendent for Student Services & Community Relations at SISD, spoke at the ceremony about how excited the district was to see Mission moving forward with the project.

“I’ve lived in this community for 15 years, literally two blocks away from Bannworth Park,” Mendiola said. “You have provided our children with a place to come and build friendships, to learn good sportsmanship, to become responsible citizens of their community; but most importantly, you provided a place where our children will always have a sense of belonging.”

Albert Peña, the Chairman of the Boys & Girls Club of Mission board, said they had been working hard for the project.

“This unit needed some upgrades for this side of town,” Peña said. “We saw the need to build the classrooms and provide the services that we currently have in our main unit, and we took off from there.”

The expansion will take approximately four to six months to be complete, and students will be taken to the other location if construction barrs people from entering the Bannworth Gym when the project is underway.

“It’s a positive place for kids, it’s a great environment,” Arevalo said. “The number one goal for the organization is to make sure that kids feel safe, they feel loved and they feel cared for.”