A Sharyland High School senior will become the first Sharyland athlete to attend the prestigious Heidelberg University in Tiffin, Ohio.

Gabriel Martinez signed a letter of intent Thursday to participate in Men’s Wrestling at Heidelberg University. 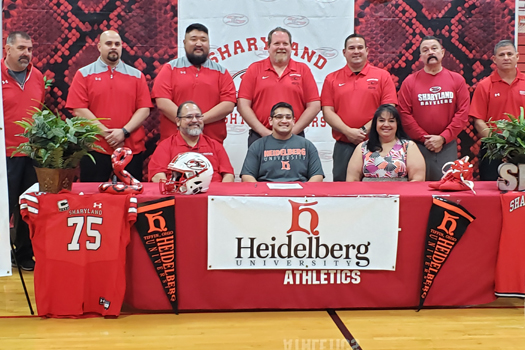 Heidelberg is a major Division III university and their team, the Student Prince, compete in the Ohio Athletics Conference. Gabriel is a 4-year letter winner in varsity wrestling at Sharyland High School. He is a three-time regional qualifier, a two-time district champion and qualified to the state wrestling tournament his senior year. His career record is 103 wins and 23 losses. He also is a three-year starter in varsity football at Sharyland High School. Gabriel has also excelled in the classroom, is one of our top ranked students and has earned Academic All-State honors in wrestling and football while a student at SHS.

“He is certainly a great example for what a student athlete is,” SHS Athletic coordinator Ron Adame said. “He’s very modest and will contribute to the success his university has had lately.”

According to Adame, Martinez is the first student at Sharyland High School to be accepted into the university.

Martinez, who was joined by his coaches and parents at the signing, says he plans to study forensic science at Heidelberg University.

“Everyone here is a part of what I’ve accomplished,” Martinez said of his supporters. “I couldn’t have done it without them. It’s amazing being here knowing anyone can do this, not just me.