Last Friday the Lady Huskies finally got the no-playoff-wins monkey off their backs as they defeated Del Rio by a score of 2-0 to claim their first ever bi-district championship. While some teams may have been satisfied with achieving a goal which had eluded them in the past, this cannot be said of the Lady Huskies. That is because as a result of their subsequent win over the Harlingen Lady Cardinals Tuesday night, the Lady Huskies have added another first to their list of accomplishments, an Area championship. 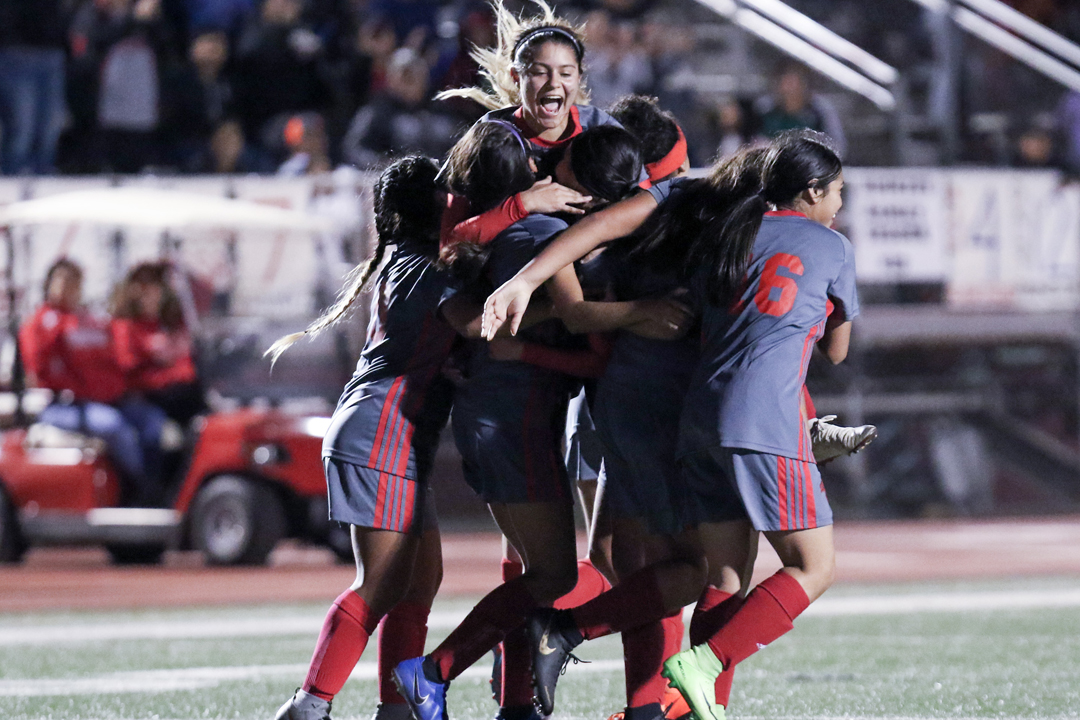 With that win, the Lady Huskies have now compiled an overall record of 36-1 this season. That nearly perfect record, along with their two playoff wins, has easily made this their most successful season in team history.

So how does it feel to be the head coach of an Area champion? Garza shared his feelings immediately after Tuesday night’s game when he said, “It feels great knowing what we have been able to accomplish. We knew that our season was not going to end today. Harlingen managed to go up on us 2-1 but our girls were resilient, they have excellent team character and we were able to bond on the field and adjust to the things we had to do on the field. They did what they had to do and they got the job done.”

While the Lady Huskies did take the lead early on when sophomore mid-fielder Yulissa Ramirez opened the scoring with a goal at the 13:40 mark of the first half, the Lady Cardinals tied the score at 1-1 with a goal of their own with just under 12 minutes left in the first half.

Even so, the goal by Ramirez did take some of the pressure off the Lady Huskies as they had missed on several scoring opportunities early on. And as for Ramirez, she was thrilled just to see the ball hit the back of the net.

“I am so proud that I was able to score the first goal for our team,” Ramirez said. “I thought I was going to miss but Melanie (Olivarez) fed it to me and it went in. I believe in myself and my team. They put everything they had into the game and I am so proud of them all.”

While the score remained 1-1 at halftime, it didn’t take the Lady Cardinals long to take their first and only lead of the game five minutes into the second half when they scored a goal to make the score 2-1 in their favor. While it was starting to look as if the Lady Huskies’ first half missed scoring opportunities may be coming back to haunt them, junior forward Melanie Olivares gave the Juarez-Lincoln faithful something to cheer about when she scored the game-tying goal with 21:51 remaining on the clock.

“Pricilla (Hernandez) fed it to me,” Olivares said. “It was a designed team play with just one touch. I just remember having the ball right in front of me as I took a deep breath, looked up and took a shot at the post that was nearest from the goalie. Luckily it went in for the score.”

“To me scoring that goal was a real boost because I was getting frustrated,” Olivares added. “But my team and my coaches made me get up. There’s a saying that Coach Garza keeps telling me and it is, ‘Big time players make big time plays,’ and I guess that’s what I did, I made a big time play.”

The score remained tied at 2-2 until the 9:25 mark of the second half when Juarez-Lincoln sophomore forward Priscilla Hernandez gave the Lady Huskies the lead to stay with her first goal of the game.

While the Lady Huskies did score an additional goal with 6:19 remaining in the game, it was actually scored by a Lady Cardinal who inadvertently kicked the ball past her own goalie and into the Juarez-Lincoln goal. That made the score 4-2, which was also the final score of the game.

As for Hernandez, when she was asked how it felt to be an Area champion, she said, “It feels great because we worked hard for our team to be in a position to win this game and now we get to advance even further. Even though we were behind, our team never gave up and that’s how we are. We come back whenever we are losing because we don’t like losing.”

Next up for the Lady Huskies will be the Laredo Alexander Lady Bulldogs in the Regional Quarterfinal round of the state playoffs. This game is scheduled to be played tonight at 7 pm at La Joya ISD Stadium.