The best-of-the-best boys’ powerlifters from across the state of Texas met at the Taylor County Expo in Abilene last month to compete in the Texas High School Powerlifting Association’s state meet. Of the 262 athletes that competed, only 11 earned gold medals and one of those highly coveted medals was earned by Juan Rivas of Palmview High School. 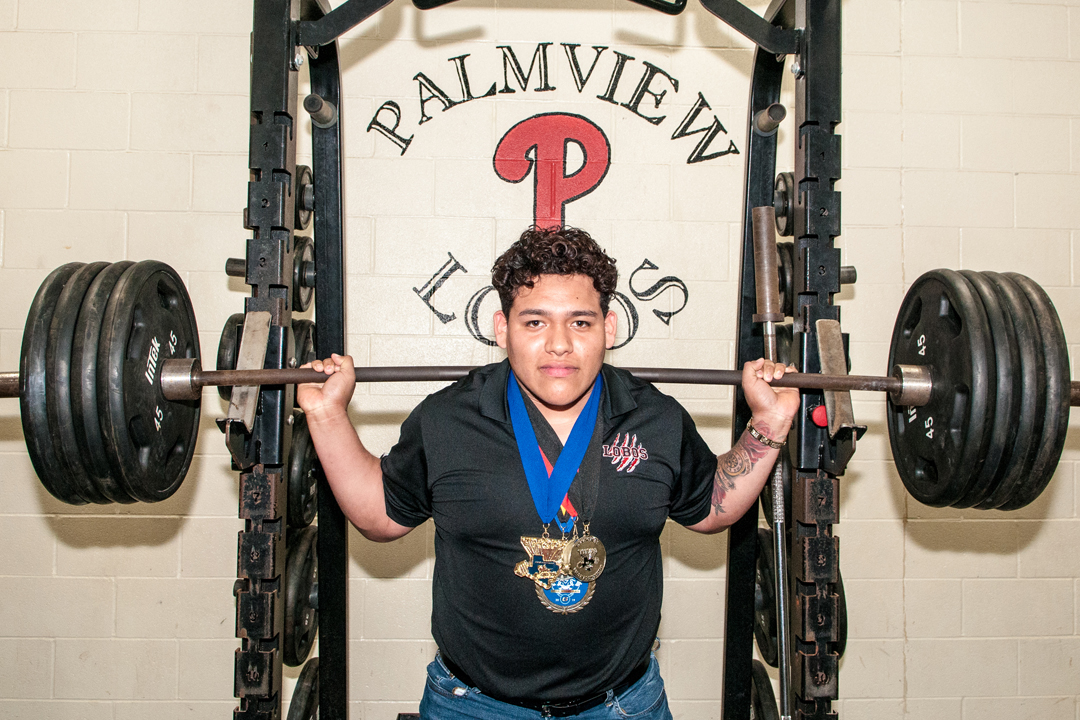 The fact that Rivas, who is now a senior, did not take up competitive powerlifting until his junior year makes the fact that he is now a state gold medalist that much more incredible. So what was it that made him decide to take up powerlifting in the first place? As Rivas explained, it was a desire to better himself as a football player.

“My freshman year I didn’t know about anything, but I did throw the shotput and the discus in track my sophomore year,” Rivas said. “But then I switched over to powerlifting my junior year so that I could get stronger for varsity football where I play offensive guard.”
Going into the state meet, Rivas was the region’s second ranked lifter behind Isai Martinez of Weslaco East High School. However, Martinez bombed-out (failed to successfully execute one off his three lifts) which eliminated one of his toughest competitors. Even so, Rivas had to better a field of 25 lifters to earn his gold medal.

“Going into my first lift, which was the squat, I wanted to lift more than 780 lbs. but I guess it was a bad day because I couldn’t.” Rivas said. “Even so, I was in third place at that point so I felt confident about my chances to medal. In the bench press I matched my maximum practice weight of 475 lbs. and I moved into second place, so I was pleased with that.”

“Going into my final lift, which was the deadlift, I was 40 lbs. behind the first place lifter,” Rivas added. “But he only deadlifted 510 lbs., which is pretty light, so I knew that I was going to beat him. And that’s what I did when I lifted 570 lbs. on my second attempt.”

Even though Rivas knew he had surpassed the lifter ahead of him, he thought he may have been passed by the third place lifter because his weights had not been posted. But he soon figured out that he had taken the gold when he saw his opponents’ reaction to his final lift.

“I knew that he didn’t get his lift because after he finished, he went up to the wall and he started crying,” Farias said.

While Palmview High School has had state gold medalists in powerlifting before, Farias is the first male to accomplish this feat. When asked how it felt to take the gold, Farias said, “It felt amazing to know that I had accomplished that achievement. It made me very happy. While I never even thought about the possibility of my winning a state gold medal, my coach believed in me and I made him proud.”

Afterwards, Farias celebrated his state gold medal with a pound of ribs and a dip in the pool.

Renzo Tamez is the Palmview High School powerlifting coach. When asked what it is about Farias that made him so successful in only his second year of powerlifting, Tamez said, “He’s a good kid, a hard worker and a good listener. He is also a very good athlete. He was even voted the Valley’s Lineman of the Year in football. So football-wise and powerlifting-wise, it’s been a very good year for him.”

“He was very upset about bombing out at the state meet last year because he knew that he could’ve done well,” Tamez added. “He also had some obstacles this year. He really wanted to win the regional championship, but that didn’t come his way. But patience is one of his virtues so while he did have some disappointments this year, I just kept telling him to be patient.”

Only two other Big 7 schools’ powerlifters placed among the top 10 in their respective weight classes at the state meet. They are Mission’s Javier Farias (7th, 123 lbs.) and La Joya’s Jose Chavez (7th, Super Heavy Weight). In the team competition, Palmview placed 12th and Pioneer placed 16th. No other Big 7 teams placed among the top 40 at the state meet.