A school district administrator with a history of drunken driving arrests found himself behind bars again last week.

The Texas Department of Public Safety arrested Ronny L. Cabrera, 49, of McAllen — the principal of the La Joya school district College and Career Center — after a traffic stop on April 4. 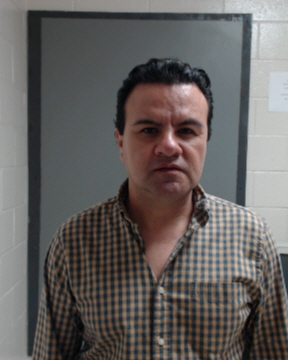 “Cabrera was displaying symptoms of intoxication,” according to an affidavit written by the state trooper, who indicated Cabrera had bloodshot eyes, unsteady balance and smelled of alcohol. “Cabrera was subsequently placed under arrest after a series of standardized sobriety tests.”

The trooper charged Cabrera with driving while intoxicated, a third-degree felony.

Cabrera couldn’t be reached for comment. Asked about the arrest, the La Joya Independent School District released a statement.

“The District does not comment on any personnel matters,” according to the statement, “however La Joya ISD intends to adhere to any applicable policy requirements as we continue to strive to provide a safe learning environment for all.”

Asked whether or not Cabrera remains the College and Career Center principal, a district spokeswoman didn’t respond.

Driving while intoxicated is normally a Class B misdemeanor punishable by a maximum of 180 days in jail and a $2,000 fine.

Cabrera, though, had a history of drunken driving convictions, which made the charge a third-degree felony.

In 1993, an Edinburg police officer arrested Cabrera on a drunken driving charge, according to Hidalgo County court records. Cabrera pleaded guilty and a judge sentenced him to time served.

Officers arrested Cabrera on another drunken driving charge in 2005, but prosecutors dismissed the case “in the interest of justice,” according to Hidalgo County court records.

Cabrera returned to court in 2015, when a Pharr police officer arrested him on another drunken driving charge. A judge sentenced Cabrera to 180 days in jail but suspended the sentence and placed him on probation for nine months.

If convicted on the third-degree felony charge, Cabrera faces a maximum of 10 years in prison and a $10,000 fine.