The Mission Veterans Lady Patriots scored twice in the bottom of the seventh to stun the Sharyland Pioneer Lady Diamondbacks at Mission Veterans High School by a score of 5-4 Tuesday night.

Freshman pitcher Jazmine Villarreal’s RBI single tied the game before junior outfielder Arielle Quijada sent a line drive over a drawn-in outfield with one out to bring in the game winner. In addition to her game tying hit, Villarreal pitched a complete game for the Lady Patriots. 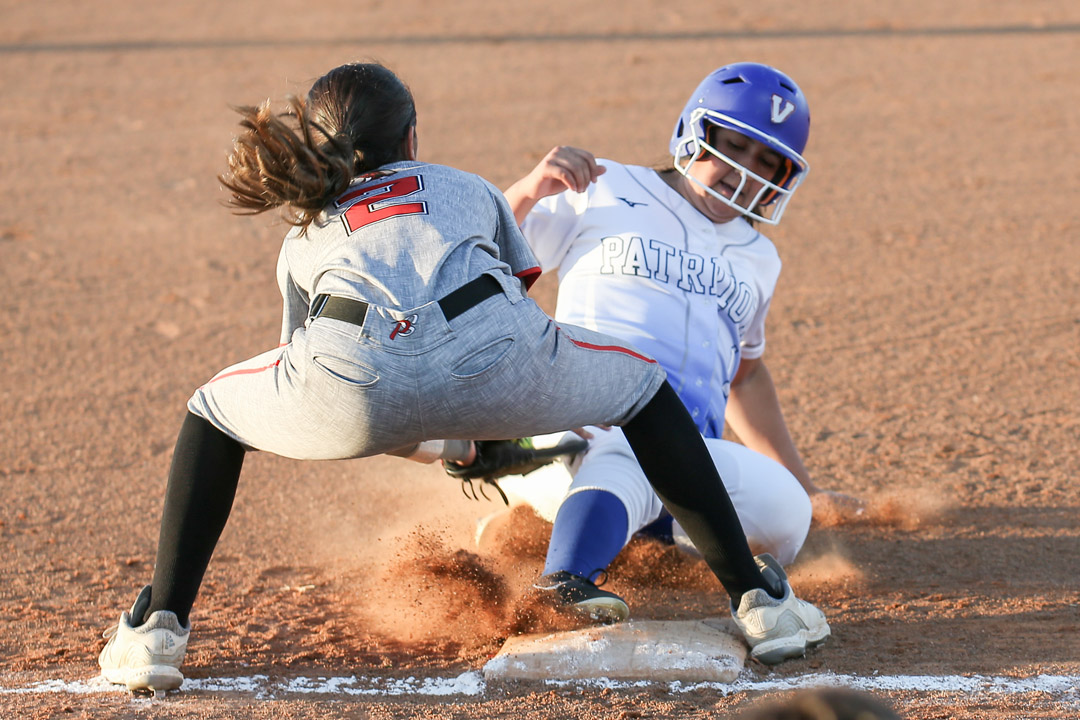 And with the help of a solid defensive performance behind her, improved the Lady Patriots to 5-6 in District 31-5A with three games left on their schedule. In addition, the come-from-behind victory kept the race for the four 31-5A playoff spots tight.

It was a fitting end to a back-and-forth game that saw both teams squander numerous scoring opportunities, any one of which could have altered the outcome of the game.

Pioneer (9-2 in District 31-5A) came into the game hoping to keep close with overall district leader PSJA Memorial before their big showdown this Friday. They opened the game with two first inning runs, courtesy of two walks and a base hit from freshman Illiana Cassanova.

But the Lady Diamondbacks would end up with nothing more, leaving two runners stranded. It was a theme that continued throughout the night as Pioneer left at least one runner on base every inning.

Veterans had the chance for more in their half of the second but were retired with nothing despite loading the bases. During the inning, senior Madison Sparks came in to pitch for the Lady Diamondbacks, keeping the home team off the board for five straight innings.

The Lady Patriots, however, were doing their part too. Villarreal struck out the side in the second and got help from a big double play to get out of a jam in the third. She also shut down potential threats with strike outs to end the sixth and the seventh innings.

Pioneer got back on the board in the fourth inning, tying the game at three with a sacrifice from junior Cierah Garcia. The Lady Diamondbacks took the lead in the top half of the sixth when junior Callie Bess scored on another Garcia sacrifice. They held off the Lady Patriots in the sixth but four hits in the bottom of the seventh won it for Mission Veterans. Freshman Natalie Cardenas and senior catcher Justine Galvan started the inning with back to back hits before Villarreal’s game tying single and Quijada’s walk-off heroics.

After the dramatic comeback Mission Vets coach Vivian Ray put it very simply, “That was big; that was a huge one. We’ve had some ups and downs this season and lost a lot of close ones in the first half of district play but we’ve talked about getting some of those games back the second time around. This was one of them.” The team is apparently listening. After a 2-5 record in the first round the Lady Patriots are 3-1 this round.

The game for Quijada was much like how their coach has described the season so far. “I was struggling (at the plate) all night so I was very anxious my last at bat. (Our) coach kept encouraging me and I just kept telling myself to get my hands out and hit it.”

Perhaps pitcher Jazmine Villarreal summed it up best, “We just didn’t give up.” Villarreal finished the night going 3 for 4 from the plate to help her own cause and held the Lady Diamondbacks to six hits while striking out five.

The win keeps the Lady Patriots in the conversation for the post season. They play at Sharyland High tonight. The Lady Diamondbacks hope to get back on track tonight too, hosting district leaders PSJA Memorial. Both games are scheduled to start at 7 pm.