Palmview officially began serving the city of Alton this week in a move officials from both cities described as historic.

On Monday, April 8, Palmview’s in-house emergency medical services began serving the city of Alton. As part of this agreement, Alton will house a Palmview EMS vehicle and a backup EMS vehicle in their fire station, both of which will be fully staffed with four crew members every day. 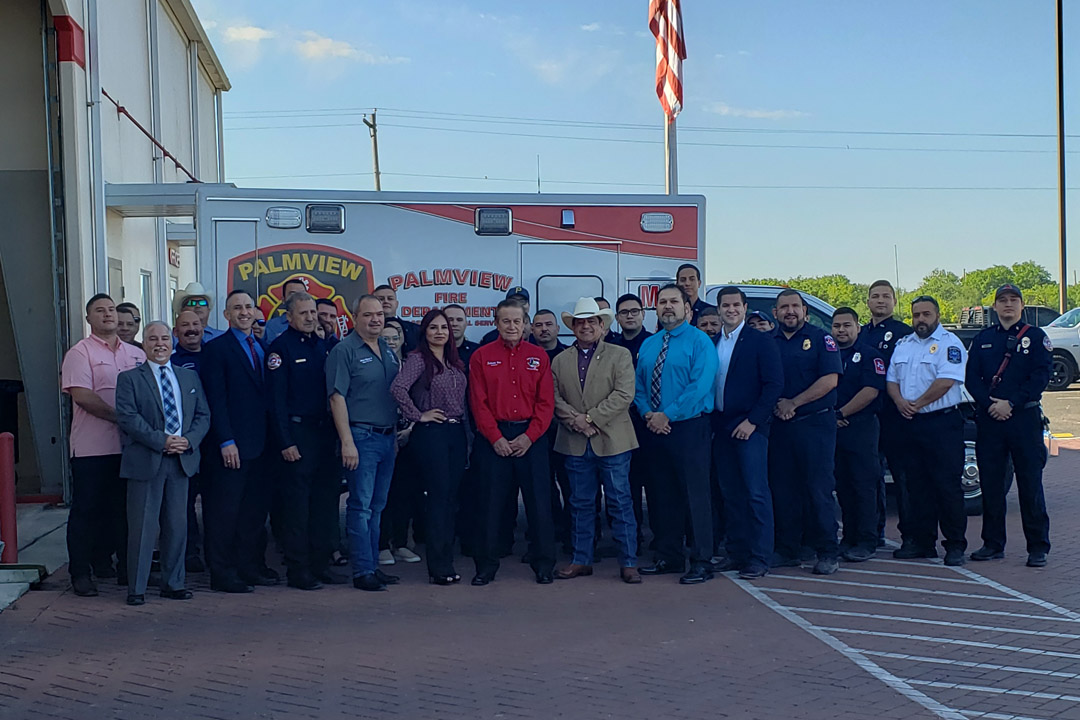 Both cities celebrated this new agreement at a ceremony in Alton&rsquo;s fire station on Monday.

“What better way to make history than to save lives,&rdquo; Palmview Mayor Pro-tem Joel Garcia said during the event. “That&rsquo;s what it&rsquo;s all about, to save lives and serve our communities. If one city can do it, two cities can do it better together. We will take care of Alton the same way we&rsquo;ve taken care of Palmview.&rdquo;

The agreement was finalized late last month during an Alton city council meeting where officials from Hidalgo County EMS-the city&rsquo;s EMS provider for the previous seven years-criticized the agreement. Officials questioned the validity of the agreement, and if Palmview-which started its in-house service last year-would be able to serve both cities.

“The people criticizing us are the ones that couldn&rsquo;t make [Palmview] grow in the past,&rdquo; Garcia said. “They had the opportunity to do what they needed to do and we got elected to make the city grow. Palmview has been stagnant for 20 years and now we&rsquo;re doing something about it.&rdquo;

Garcia added that Palmview will focus on helping other communities as they are in discussions with the La Joya school district to include them in the city&rsquo;s dispatch services.

“Palmview is on the rise. We look forward to working with everyone and every community around us,&rdquo; Garcia said.
Palmview Fire Chief Jerry Alaniz said the agreement is historical as this is the first of its kind in the Valley.

“You don&rsquo;t get this type of effort in the Rio Grande Valley, only in the metro areas so for two small cities to do this is an important achievement,&rdquo; Alaniz said. “Among both departments we have highly trained staff, state of the art equipment and we&rsquo;re truly are here to serve both communities.&rdquo;

The event was attended by officials with the Mercedes Fire Department who, according to Alton City Manager Jeff Underwood, have expressed an interest in starting a similar agreement with a neighboring city.

“With Palmview EMS, response time and the level of care our residents receive will be improved,&rdquo; Underwood said. “There&rsquo;s a passion for this service that makes it clear they will succeed. If there was any hesitation we wouldn&rsquo;t have gone this route.&rdquo;

Alton Mayor Salvador Vela also expressed support for having Palmview in his city.

“We&rsquo;re going to have a good relationship with all the good stuff they have,&rdquo; Vela said. “We appreciate them coming here, you can only prosper when you&rsquo;re in Alton.&rdquo;