Each April and May as the school year starts winding down and students and teachers alike start looking forward to summer vacation, the high school track and field seasons start heating up.

And so far this year it is the Sharyland Pioneer Diamondbacks’ boys’ and girls’ teams that are proving to be on fire. Case in point, Saturday’s District 31-5A track and field meet, held at PSJA Stadium, in which the Diamondbacks and the Lady Diamondbacks both took the district championships. 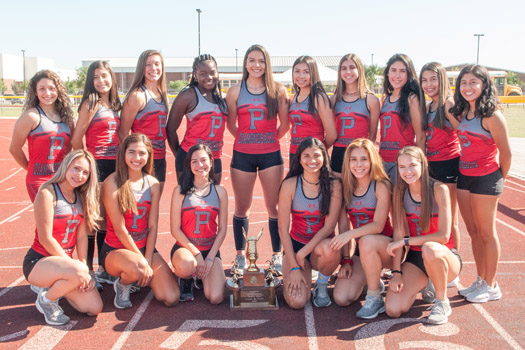 While the Lady Diamondbacks faced some stiff competition for their title, their 146 points held up as the Sharyland Lady Rattlers, and their 140 points, came in a very close second. The other two Big 7 5A girls track teams, the Palmview Lady Lobos and the Mission Veterans Lady Patriots, placed third and fourth with their 113 and 98 points respectively.

First year Lady Diamondbacks’ head track and field coach, Claudia Garza, shared what it is about her girls that enabled them to win a district title in just their first year under her leadership when she said, “I am blessed to have a senior group that is very, very talented and very hard working. That made it easier for my younger girls to fill in where they were needed. Also, I have a junior class that is very passionate and extremely hard working and they helped out in the relays. Finally, I had a really strong group of freshmen that understood what my expectations were and they adapted right away.”

Pioneer senior, Jessica Zarate has been running track since she was in seventh grade, Having competed in both the 100 and 300m hurdles at the district meet, Zarate took the district championship in the 100 meter hurdles.

She shared what winning a team district championship means to her when she said, “It means a lot because we’ve worked very, very hard even before the track meets started. And under a new coach it’s even better because our workouts have been better also. And we just feel like a family instead of a team and that helps us a lot too.”

Sophomore Daisy Monie competed in the shot put and discus throw for the Lady Diamondbacks at the district meet. Her throw of 145-10, a PR (personal record), in the discus was good enough to win her a district championship. As a freshman last year she placed ninth in the discus at state. So what goals has she set for herself this year?

“My goals this year is to place in the top three at state and to throw a 150 at state,” Monie said.

“Before we started the 4 x 400, the announcer announced that we were up by two points,” Coronado said. “So we knew it was up to us and we couldn’t let Sharyland pass us at all.”

Sophomore Audrey Hornaday competed in the long jump and the triple jump at the district meet. Her triple jump of 34-10.75 was not only a PR for her, but it was also good enough to earn her a district championship. However, it was watching the Lady Diamondbacks’ 4 x 400 relay team clinch the team title that really got her excited.

“It was so amazing watching my teammates kill it,” Hornaday said. “I’ve seen them work hard every single practice so it was awesome to see it pay off for them.”

As for the Diamondbacks boys, their 184 points allowed them to cruise to an impressive 83 point win Saturday.

Their nearest competitor, the Mission Veterans Patriots, could only muster 101 points for their second place finish. The other two Big 7 5A boys’ teams, the Sharyland Rattlers and the Palmview Lobos, placed fourth and eighth at the district meet with their 97 and 14 points respectively. 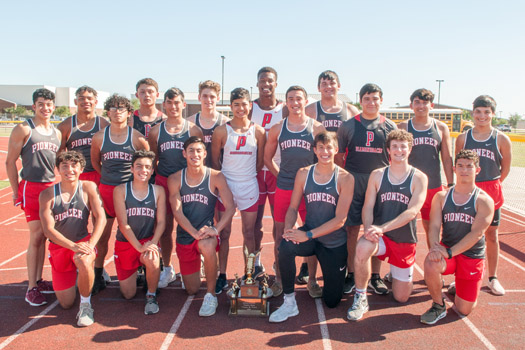 Senior Diego Perez competed in the 4 x 100,4 x 200 and the 200 meters for the Diamondbacks. While the 4 x 200 team’s time of 1:29.88 was only six one-hundredths of a second faster than the Mission Veterans team’s time, it was good enough for a district championship. When asked if he was surprised by the fact that the Diamondbacks’ team won the district title by so many points, Perez said, “We have had that kind of success before. While it was not that we were expecting to win by such a large margin, we do have high expectations for us as a team. So we just try our best at every event and let the rest take care of itself.”

When asked how it felt to win the team district title by such a large margin, Morales said, “Last year we lost to Rio Grande and it was tough. This year we didn’t lose that many guys, we were hungry and we worked hard all year and we expected to win.”

The Area meet, which will also be held at PSJA Stadium, is scheduled to take place this coming Thursday.

Here is a school by school listing of the individual events’ district champions: