Two District 31 – 5A baseball playoff contenders squared off Tuesday night at La Joya Palmview High School with the visiting Rio Grande City Rattlers stopping the Palmview Lobos 14 – 2. Despite the loss Palmview (6 – 5 in district) still controls their own post season hopes with just a few games remaining in the regular season.

The victory helped the RGC Rattlers keep pace with Sharyland High and Sharyland Pioneer for the District’s top spot. All three have 9 – 2 district records. 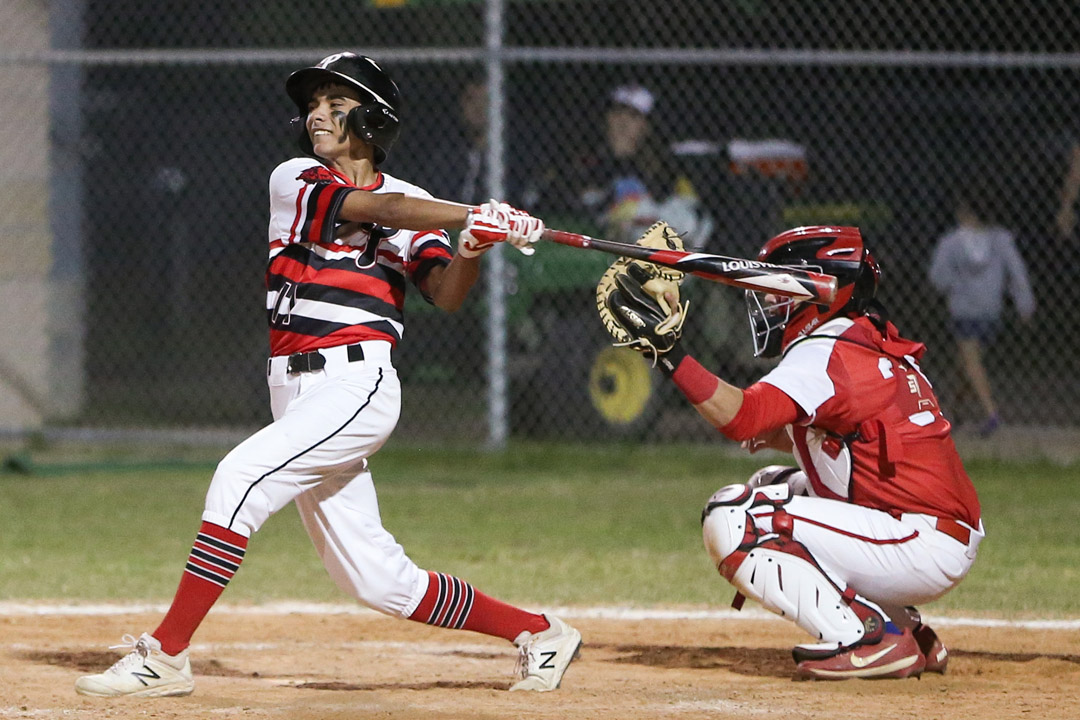 Rio Grande City sent all nine batters to the plate in both the first and second innings to build a seven to nothing lead and was never really threatened. Robbie Ayala’s two out RBI triple in the bottom of the second got the Lobos on the board but four hits in the top of the third plated three more runs for RGC. Palmview got a solo home run from Jonathan Martinez in the bottom of the fourth to account for the final Lobos run before Rio scored three more times in the fifth to end it. The loss halted a three game inning streak for Palmview.

Palmview coach Ricky Garcia lamented the early deficit which he described as “free runs” for the Rattlers that “gave them confidence” the rest of the night. He still, however, remains optimistic about the remainder of the season. “People didn’t expect us to be in this position at the beginning of the season,” said Garcia. That position is currently fourth in the standings with two to play next week against PSJA Southwest. (The Lobos played Rio again last night.)

Mission Veterans is the team giving chase to Palmview for the fourth and final 31 -5A playoff spot. A 14 to nine victory over PSJA Memorial improved their district record to 4 – 7 helping them close the gap with the Lobos and end a five game losing streak. Coach Ben Gonzalez said the key to finishing the season would be to play “every inning; every game”. Like the Lobos, the Patriots played again last night (PSJA Memorial) and have two games against Roma next week to finish the regular season.

Much more secure in their post season plans are the Sharyland Pioneer Diamondbacks and the Sharyland Rattlers. Both entered play last night in a three-way tie for first with Rio Grande. Tuesday night saw the Diamondbacks blank Roma 13 to 0 to complete their sixth straight victory. (The two played again last night.)

Coach Casey Smith cited his teams “more consistent effort and focus” as one of the keys to their current place in the standings. In addition, Pioneer has a pitching staff that has “given us a chance to win every game. “The Diamondbacks close out the regular season with two games against Rio next week.

Sharyland High has stayed in the race for first with their own six game winning streak after defeating PSJA Southwest 8 -0 on Tuesday. The Rattlers played last night (PSJA Southwest) and close out the regular season playing PSJA Memorial twice next week.

District 30 – 6A
Things are much tighter in the District 30 – 6A playoff picture for Big 7 schools La Joya and Mission. A 6-4 loss on Tuesday to PSJA North dropped the Coyotes to 7 – 5 in district and out of a third place tie with the Raiders.

The loss reduced their cushion for the fourth and final playoff spot to just one game over Mission (6 – 6).

Both teams were scheduled to play last night and conclude the regular season next Tuesday.

La Joya coach Mario Flores credits three freshman starters that have “played like veterans” and “treating every game the past two weeks like a play- off game” as the reasons for staying in the hunt to make the post season. The Tuesday loss ended a three game winning streak. The Coyotes were scheduled to play McAllen Rowe last night and, in what could be a game for a play-off spot, close out their regular season hosting Mission next Tuesday.

Mission High extended their own winning streak to three with an 8-4 victory over McAllen Rowe on Tuesday. They were scheduled to play PSJA last night and close out their regular season next Tuesday at La Joya.

While no longer in contention the La Joya Juarez – Lincoln Huskies got a Tuesday night victory over McAllen Memorial by a score of 11-4. Coach Chuck Garza hopes to end the season by seeing his team “continue to learn”. He is excited about the prospects of bringing back most of his team for next season.