It was a race that came down to the wire, but the Juarez-Lincoln Huskies boys track team emerged victorious last week as they claimed their second 30-6A championship in four years. Their team score of 130 points was 12 points better than the district runner-ups, McAllen Memorial Mustangs’, score of 118 points.

The McAllen High Bulldogs finished in third place with a score of 87 points and the Mission Eagles placed fourth with 85 points. As for the La Joya Coyotes, they placed eighth with a score of 35 points. 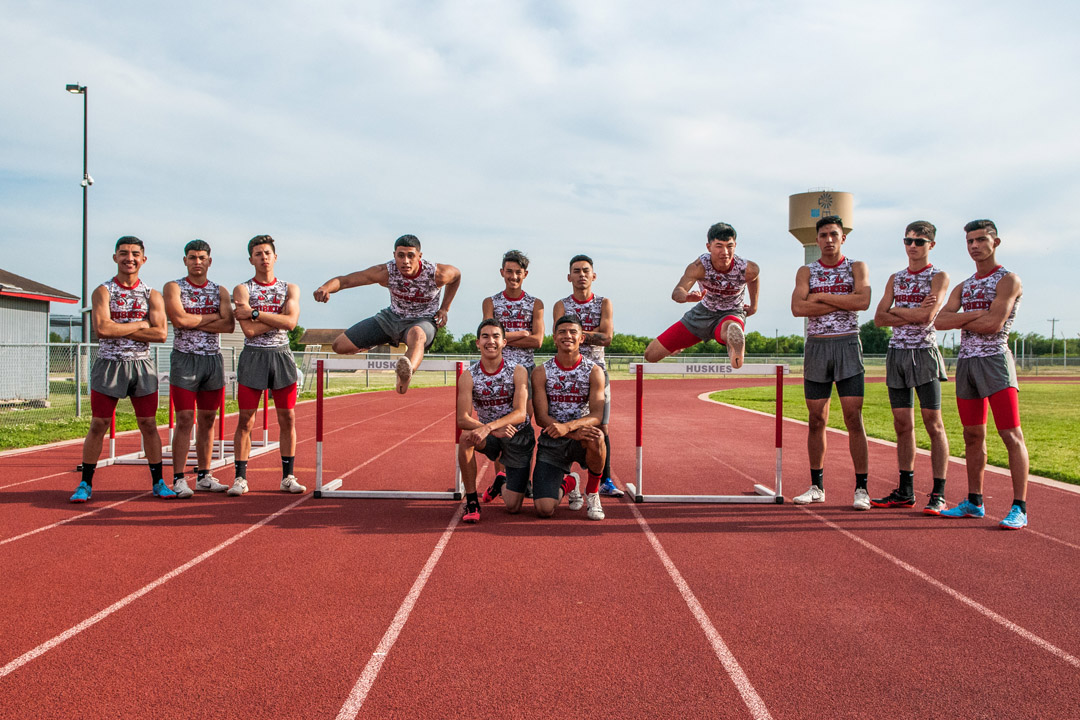 With district championships in six individual events, the Huskies ran, jumped and threw their way to the top of the 30-6A heap and never looked back. It was a day that Huskies’ boys track and field coach Horacio Garza won’t soon forget.

“Up until the 4 x 200 relay, it was very, very close between Memorial, ourselves and Mission,” Garza said. “As the races continued to go towards the mile and mile relay, it started to spread itself out a little bit between ourselves and Memorial. Memorial did go ahead of us by a score of 118-110 after the mile. But then we had the mile relay coming up and we were fortunate enough to win it. That earned us 20 points and gave us our 130-118 win.”

As Garza explained, the winners of three relay races, the 4 x 100, the 4 x 200 and the 4 x 400, earn 20 points each while the winners of all the other events only earn 10 points. With the 4 x 400, or the mile relay as it is often called, traditionally being the final event of UIL (University Interscholastic League) track meets, it oftentimes comes down to this event to decide the overall team winner.

When asked if his team was expected to win or if they pulled off an upset, Garza said, “We like to attack every race and every meet to try to win, however considering the fact that we have a very young squad and not a lot of kids in our program, we went into this meet hoping to finish somewhere near the top. But we did some unexpected things with some of our kids that hit some super personal records. We had Ernie Salinas winning the 800m after being ranked fourth or fifth. We have Kenneth Gonzalez who won the 100m dash, our 4 x 200 relay team won their race, we had hurdlers place well in the 110m hurdles and the 300m hurdles and we had Luis Flores who came in second in the 200m race. So we had some really outstanding performances by a lot of the kids and that’s what allowed us to win.”

“Also, everybody came out fired up and focused and did their thing,” added Garza. “We were able to stay close and once the kids found out how close they were to winning it and with only a few races left, they just kept their foot on the pedal and kept on working. It was awesome to see.”

With the top four finishes in each event advancing to Area, Garza is planning on taking 15 of his boys to Laredo for the Area meet. Twelve will be competing and three will be alternates.

As a back-to-back high jump district champion and as a member of the Huskies’ gold medal winning 4 x 200m and 4 x 400m relay teams, Juarez-Lincoln junior Luis Flores was instrumental in the Huskies’ district title. When asked how it felt to be part of the district championship team, Flores said, “I was really, really happy. The whole team was jumping up and down, It was great!”

While Flores’ high jump PR (personal record) is 6-foot-4-inches, he took the district championship with a jump of 6-foot-2-inches. Heading into the Area meet, he is hoping to better his PR by four inches to 6-foot-8-inches.

Ernesto Salinas is one of only two seniors on the Huskies’ track team. He placed third in the 400m, he won the 800m and he ran the anchor leg on the first place mile relay team. Despite the fact that he is a senior, this is the first year he has run track for the Huskies.

“I’m on the soccer team so I haven’t been able to run track because the past three years we’ve been in the playoffs,” Salinas said. “But this year we lost in the first round so here I am. While I’m not happy that we lost so soon in soccer, I am very happy about being able to run in track. Now I want to make my teammates proud,”
Sophomore Kenneth Gonzalez was a member of the Huskies’ second place 4 x 100m and the first place 4 x 400m relay teams and he took the district championship in the 100m dash with a PR of 10.97.

When asked what it’s going to take for the Huskies to succeed against the kind of stiff competition they are sure to face at Area, Gonzalez said, “We have to compete as a team and we need to make sure we never give up.

Winning district made me very happy but now we have Area and then Regional. But we’re ready.”