This article originally appeared in the Progress Times issue dated Friday, April 19, 2019 and has been amended to clarify Susan Hillsbury’s name and how to register for pickleball.

As an ambassador for pickleball-a sport that combines ping pong, tennis and badminton, Joyce Mitchell has seen players benefit from the sport. One of her players, for example, received the full use of her arm again after she had been in a car accident.

“Her arm was practically severed off and had to be reattached,” Mitchell recalled. “Since she essentially had no muscles in her arm she had to hold the arm that was holding the pickleball paddle as she played.” 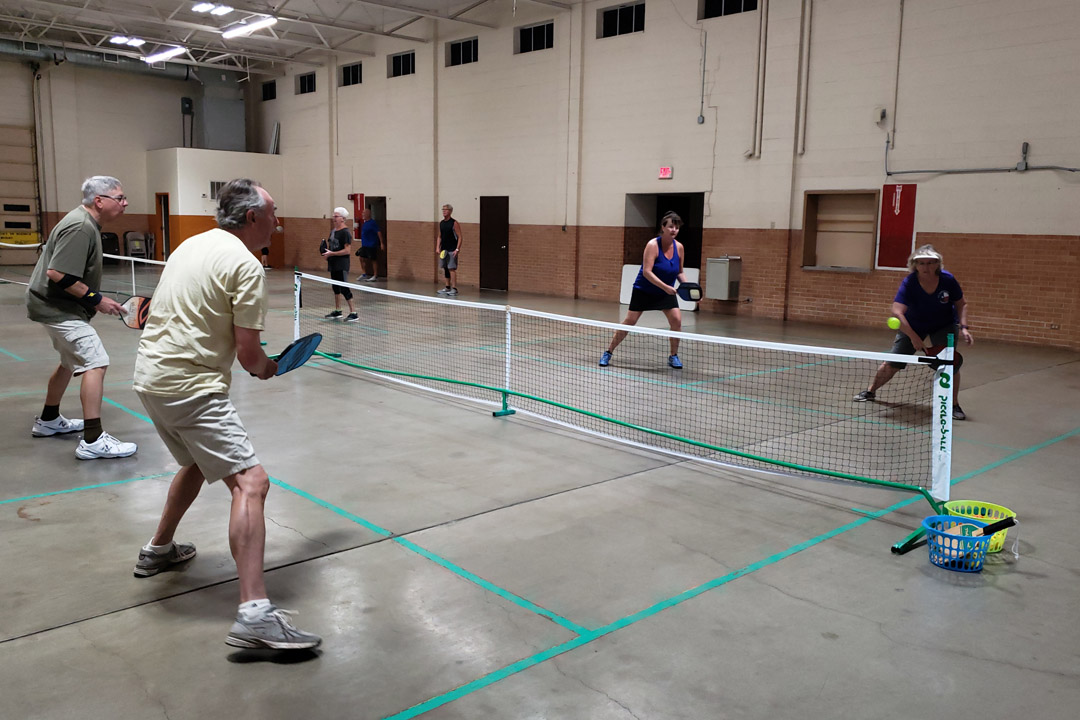 Despite this impediment, Mitchell remembers that the player, Susan Hillsbury, had a lot of fun playing it and was laughing throughout a pickleball game.

“Four months after her accident she began to move her arm again,” Mitchell said. “Susan’s doctor was amazed at her recovery and even more so when she told the doctor it was because of regularly playing pickleball. It’s a sport but when you play it, it doesn’t feel like exercise because you’re having so much fun.”

As an ambassador for the sport, Mitchell oversees Pickleball in the cities of Pharr and Mission, the latter of which hosts Pickleball games weekdays in the city’s Parks and Recreation Center.

In the game, groups of people hit a Wiffle ball over a net. Mission residents can enjoy the game in the center’s six pickleball courts Mondays, Wednesdays and Fridays from 9:30 am through noon and on Tuesdays and Thursdays from 1 p.m. though 4 p.m. year-round.

Now, the Mission Parks and Recreations department is hoping to increase attention in the sport this summer with a camp for kids and a pickleball demonstration for adults this summer.

The program for kids will be held every Tuesday and Thursday mornings beginning June 4 and ending July 15.

Kids aged 10 through 15 are invited to attend the six-week program for $20 as they play the sport from 9 a.m. through noon.

The demonstration, set for Saturday, May 4, is free and will introduce residents to the sport that Mitchell says is the fastest growing one in the country.

“As this is a sport that was created in the north, we always have Winter Texans during their season playing this but there aren’t a lot of locals who are aware pickleball exists,” Mitchell said. “We’re hoping to attract new players with this free demonstration next month where people can learn about the sport and try it out. All you need is a good pair of tennis shoes to play. We’ll provide the paddles.”

Among one of the regular pickleball players in the city is Lillian Palmer, an 83-year-old Mission resident. She was among a dozen senior citizens enjoying a game of pickleball Monday. She said she plays the sport at least four times a week.

“I remember I hated this sport until I started getting good at it,” Palmer said. “After playing it for a while I’ve had my doctors tell me they wish all their patients were like me. It keeps me young and active, what else would I be doing all day? Watching TV?”

As a certified personal trainer, Mitchell said the sport offers many benefits, and can be played by all.

“People don’t realize they’re working out as they play and then the next thing you know, they’re moving faster, doing things they weren’t able to do just a couple of months prior to that while laughing and having a good time,” Mitchell said. “It’s very social, they get to get out and meet people and have lots of fun. With all the obesity and diabetes in the valley, this is something we are promoting as a lifetime sport that can help you stay active with very little investment.”.

For more information on the sport and the demonstration and children’s camp, contact Joyce Mitchell at 682-556-4738.

To register for the demonstration and kid’s camp, contact the Mission Parks and Recreation Department at (956) 580-8760.