The La Joya Coyotes rode the arm of JC Gutierrez to defeat the Mission Eagles Tuesday night 6-1 and clinch the final District 30-6A playoff spot. Both teams came into the game needing a victory to extend their seasons and both came in with momentum on their side. La Joya had won four of their last five while Mission came in riding a four game winning streak.

Gutierrez didn’t give the Eagles too many opportunities, surrendering only two hits and striking out nine before leaving the game with two outs in the seventh inning due to pitch count. He also had to deal with numerous delays as the game was interrupted several times for clarifications and conferences between the umpires and coaches. “I just told myself not to get upset (about the delays) and stay focused,” said Gutierrez. “I know what to do and what I bring (when I pitch).” 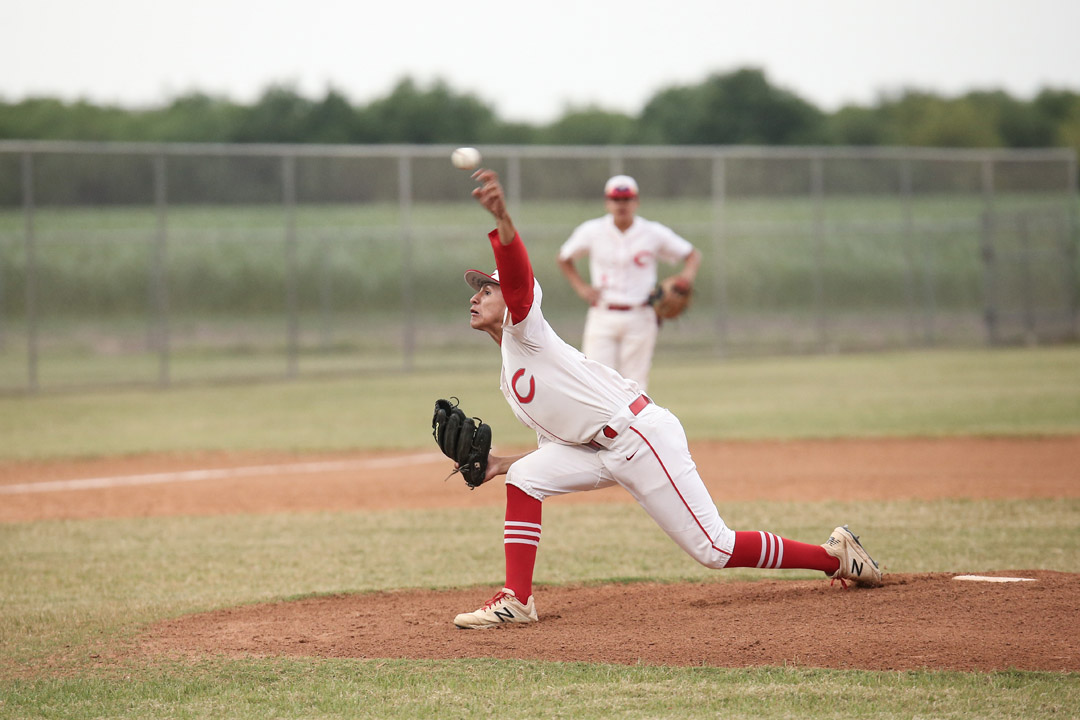 Gutierrez got some early help too. After keeping the Eagles off the board in the top half of the first, the Coyotes used four hits and two hit batters to plate three runs in their half. Lead-off hitter Anthony Pena was one of the batters hit. He got moved along the bases by Alan Delgado’s infield single and scored the game’s first run on an RBI single from Hugo Cantu. Delgado and Cantu scored courtesy of RBI singles from Elias Morales and Jake Moreno. Moreno, a senior, added a double in the third inning and scored in the fifth inning on an RBI single from catcher Jose Gutierrez. “We knew tonight would be tough,” said Moreno. “I was just up there trying to make contact.”

That sentiment was echoed by La Joya coach Mario Flores. “We emphasized getting hits with runners on base in practice,” said the third-year skipper. For the night the Coyotes collected eight hits, six of them singles. They extended their lead to 5-0 in the fourth inning, however, without a hit. Delgado reached base on a fielder’s choice, working his way around the bases and eventually scoring on several wild pitches. Salvador Lopez hit a sacrifice fly to bring home Hugo Cantu who had reached on a wild pitch. Jose Gutierrez’s second RBI single of the night scored Moreno in the fifth inning to complete the Coyote’s scoring.

The victory continues a stretch for La Joya that has seen this year’s seniors reach the post season every year. “We have tradition here and it’s (the playoffs) expected,” said Pena, one of two starting seniors for the Coyotes. Coach Flores was quick to praise them citing their leadership as one of the factors in the team’s success. “ The young guys are feeding off the seniors,” said Flores. La Joya finished 9-5 in district to secure the fourth and final playoff spot. They are 17-11 overall.

It was a tough ending for the Eagles who closed out their season with a 7-7 district record and 12-15-1 overall. Several one-run defeats early in the district race had left the team in sixth place forcing them to basically win out to reach the post season. They came up one win short.

Senior Andy Martinez pitched most of the game for the Eagles, coming on in relief for Jose Soto in the first inning. Martinez would record six strikeouts during his five plus innings on the mound to keep the game close. Their offense just couldn’t get it going against Gutierrez. They were hitless until the fourth inning but Gutierrez got a big strikeout to end a bases loaded threat. The Eagles finally got on the board in the seventh getting two runners on base to force a Coyote pitching change. Jacob Salinas scored on a La Joya throwing error. Angel Solis came in to pitch for the Coyotes and closed out the game with a strikeout.

“Hats off to my kids for the way they battled back the last few weeks,” said Mission coach Rick Lozano. But, he added, “Hats off to #3 (La Joya pitcher JC Gutierrez) for his performance.”

Next up for La Joya is District 29-6A champ Laredo United South. They will play a best of three series beginning Friday, May 3 in La Joya at 7 pm. The series will move to the Laredo SAC on Saturday, May 4 for Game 2 starting at 2 pm. If needed, Game 3 will start 30 minutes after the conclusion of Game 2.

In addition to La Joya three other Big 7 baseball teams have qualified for the post season. Sharyland High currently leads District 31-5A with a 11-2 record. The Sharyland Pioneer Diamondbacks sit one game back at 10-3. Both had previously secured playoff spots.

La Joya Palmview improved their record to 8-5 and qualified for the post-season with a 9-1 victory over PSJA Southwest Tuesday night. Playoff dates and opponents are yet to be determined. All three teams close out the regular season tonight. Sharyland hosts PSJA Memorial, Pioneer hosts Rio Grande City and Palmview hosts PSJA Southwest. All games are scheduled to start at 7 pm.