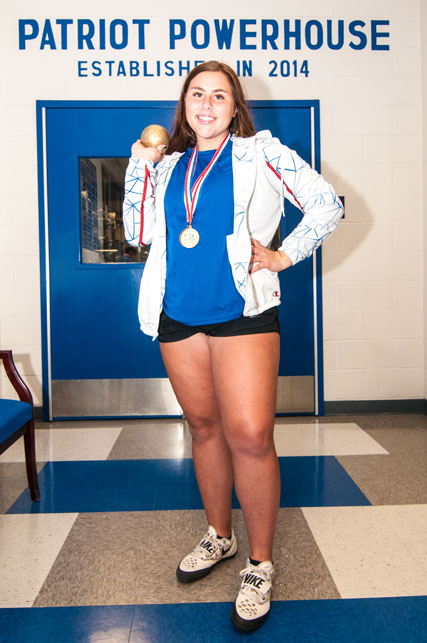 In the discus, Salinas’ throw of 127-09 placed her second behind Sharyland Pioneer’s Daizy Monie at the District 31-5A meet, as did her throw of 123-09 at the 5A Districts 31/32 Area meet. And while her throw of 123-01 landed her in third place at the 5A Region IV meet, it was good enough to earn her a trip to the UIL State Track and field meet as the at-large participant.

That, along with her Region IV championship in the shot put, makes Salinas the only Big 7 athlete to qualify for the state meet in two events.

A junior at Mission Veterans High School, Salinas has been throwing since she was in eighth grade. As for what it was that made her decide to take up throwing, Salinas admitted that it was her way of getting out of having to run track.

“I started throwing when my middle school track coaches said we had to be in track but I didn’t want to run,” Salinas said. “So I decided to try throwing thinking it would be easier.”

The fact that her Regional meet winning throw was more than a foot short of her PR (personal record) of 43-3, made Salinas a bit nervous as she watched the other competitors try to out-throw her.

“We get a total of six throws, three in the preliminaries and three in the finals,” Salinas explained. “My second to last throw was my best throw of the day. I had been in fourth place going into the finals but then I threw the 41-10 which put me in the lead. Then it was a nail-biter as I hoped that nobody would pass me.”

At 5-foot-6 and 180 muscular pounds, Salinas has the kind of physique you might expect a shot putter to have. However, there is a lot more to being a successful thrower than having the right body type; having good technique is just as important, if not more.

“I believe that my technique is pretty good,” Salinas said. “But there’s always room for improvement. While it’s not perfect, my technique has been getting better with help from my coaches. I’ve also been trying to do more weight lifting in hopes that will help.”

While Mission Veterans High School has had a shot putter win a state championship, that was in the men’s competition. Therefore Salinas will be out to become the first female state champion shot putter in school history.

When asked what it would mean to her should she accomplish this feat, Salinas said, “That would mean everything. My coaches have worked so hard with me that we’re definitely going for the gold medal.”

As for what she is looking forward to the most at the state meet, Salinas said, “Just being there will be such an honor. I’m just going to try doing my very best. And my parents have been super supportive so I’m looking forward to having my Dad there because he never misses any of my meets, and he’s never been to a state meet before.”

The only other Big 7 athletes that qualified for the UIL Track and Field State Meet, which will be taking place at Mike A. Myers Stadium at the University of Texas in Austin next Friday and Saturday, are all from Pioneer High School. They are Michael Landovazo (110m hurdles), Parker Barrett (high jump) and Daizy Monie (discus).